Recalling a couple of dog costumes:
Silent films as related to biology and gravity 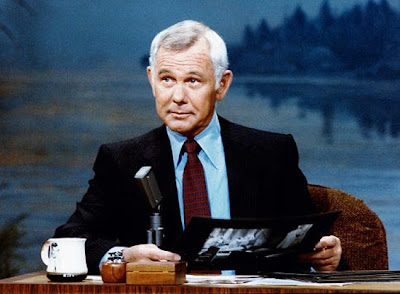 In 1992, as his 30-year tenure as 'Tonight Show' host was coming to a close, Johnny Carson would show clips from old broadcasts. One was a comedy sketch where he wore a very elaborate dog costume. After watching the clip, Carson said he had absolutely no recollection of doing that skit or wearing that costume.

After several thousand shows, I'm not surprised. But at the time it struck me as odd, for dressing up as a dog would be something I'd probably remember.

But then I recently got a taste of what Carson meant when I read the results of an interview I did way back last December. On my own, I would have remembered very little of what I said. But there it all was, staring me in the face. There I was, wearing that dog costume that I'd forgotten about.

The interview was conducted by Damon Griffin, a young writer and filmmaker who at the time was working on a book-length project. After a screening of 'The Trail of '98' last December at the Manchester (N.H.) City Library, we walked over to the Red Arrow Diner on Lowell Street and started gabbing about film and music and history.

I'm glad he was there, because he captured two thoughts that I had at the time, but which I'd since forgotten. Not one but two dog costumes here!

Both thoughts were part of a single paragraph in the interview, which went like this: (The "he" is me.)


He looked down at his plate. He scraped some salad around. “It’s like biology,” he said. “We can’t allow one species to go extinct.”

His memory jogged, Jeff sat up. “Actually, filming reality is almost incidental,” he said. “I had the good fortune to live in Tokyo. It was one of the few places where I didn’t know where the ground was. And when a movie denies you that, it’s disorienting. When you watch a great film, you know where the ground is.”

The first point, about extinction, was in answer to this question: Why put time and energy into preserving and showing old film? And the answer I came up with that evening, taken from biology, strikes me as a good one.

Here's the first part: Biologists argue that it's important to keep species from extinction in part because we may have no idea of their future value. Today's snail darter could be tomorrow's cure for cancer.

Ergo: In terms of vintage cinema, we have no idea today how valuable a recorded moving image will have in times to come. Just by accident, an ordinary domestic comedy from the 1920s contains a wealth of information about how people really lived during a certain time: the clothes, the furniture, the front yard, the pets, and so on. Never mind the story: look at the backgrounds!

And imagine how valuable it would be, say, to have the same kind of images from Shakespeare's time. Or during the Crusades. Or from the French Revolution. Or the time of Christ, or the Romans! So even the most worthless Grade Z program-fillers may provide future generations a wealth of information about us in ways that we can't even begin to imagine. But they can't if the films don't exist, and they won't exist if we don't make some kind of effort to keep them unforgotten in our own times.

So there's one reason to support vintage film. Kinda long-winded, but I think it's a worthy perspective that I don't often hear, even among the vintage film community. So thanks to Damon Griffin for reminding me.

The other thought relates to Tokyo. Yes, I lived in Tokyo for a time (working at the Yomiuri Shimbun newspaper), and one night I took the subway to the Shibuya area. I thought I was travelling underground, but when I stepped off the train and onto the Shibuya platform, it was actually part of an open-air maze of bridges and platforms extending in all directions.

Below me, another train was pulling into a different station. Looking up, a highway viaduct soared overhead. Stores were below me, a shopping complex was up and to the right, and the local roadways were a nest of ramps and spirals. Where was the actual street level?

What I felt, I think, was something that all humans instinctively crave, as we are all subject to gravity and spend most of our lives walking upright (most of us, anyway) on the surface of our planet. We want to know where the ground is. And we don't realize how much we crave this "anchoring" until the rare moments when it's taken away from us. This is what happened to me, unexpectedly, in Shibuya.

How does this relate to silent film? Well, filmmakers then had little in the way of digital post-production special effects. Instead, if they wanted something to show up in their movie, they had to actually film something real in front of a camera. In the early days, I think this helped establish much of the excitement of the movies: that what you saw on screen actually happened.

In 'The General' (1926), Buster Keaton went to the trouble of dropping an actual steam locomotive through an actual bridge into an actual river. Whatever else you want to say about it, that's an exciting this to watch. And audiences knew it actually happened! 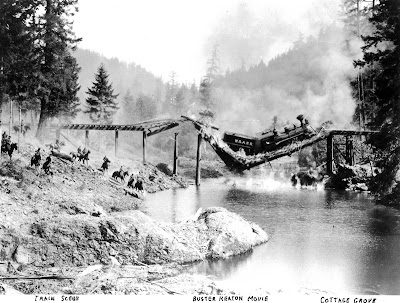 But now, the amazing flexibility of digital tools mean whole sequences can be constructed on a server with little or nothing actually happening in front of any kind of camera. Even the laws of gravity don't have to be obeyed, as you see in any number of super-hero films in which climactic battles take place with characters able to fly up and down in any direction, without regard to the laws of gravity. They'd be right at home in Shibuya!

This is to take nothing away from all the hard work that goes into creating a modern blockbuster superhit movie. However, the lack of fidelity to reality means the films are not limited to functioning according to the laws of gravity. Yes, this can be liberating. But at the same time, in some ways they don't reflect that age-old desire for people to know where the ground is. And remember, it's something you only really notice when it's missing.

So I think this is something we can learn from older films. Maybe there's a value in building a film out of things that can actually be photographed in front of a camera. Maybe it's an essential element of why people responded to movies so strongly when they were new. I don't know for sure, but I think there's something to this.

So thanks for Damon Griffin for getting not one but two dog costumes in that interview last December. If you'd like to read it in its entirety, it's online at http://lightreade.blogspot.com/p/meet-your-makers.html.