The 'Perception Gap' shows up during
a screening of 'Yankee Clipper' in Wilton, N.H. 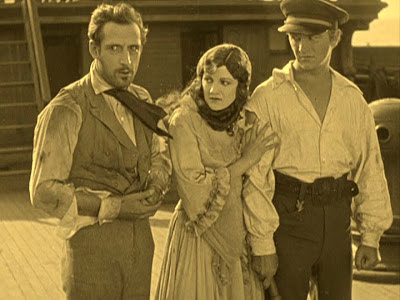 Good turnout last Sunday (June 30th) for the first in our series of nautical silent film adventures at the Wilton (N.H.) Town Hall Theatre this summer. About 80 people were on deck to take in 'The Yankee Clipper' (1927), a fun high seas adventure with two local connections.

Local Connection No. 1: The film centered on a race between two 1840s clipper sailing ships from China to Boston, which is our big city here in New England. (Modest local nickname: 'The Hub of the Universe.')

Local Connection no. 2: Playing 'Portugese Joe' was none other than character actor Walter Long, who is a native of Milford, N.H., the town right next to Wilton.

I actually forgot to say anything about the Walter Long connection before the movie, so it was only afterwards that I mentioned he was a local boy. It was enough to earn Walter Long a healthy round of applause!

And afterwards, I was approached by two women who wanted to talk more about Long. One of them was a member of the Fitch family, which has run a dairy farm at "Fitch's Corner" in Milford since probably about the mid 18th century.

The gals thought they might have known Long's family. But I had the sad task of informing them that Dave Stevenson, noted film archivist in Manchester, N.H., had already probed the town records following the year of Walter's birth (1879), and apparently the family was only in town a short while before moving on to who-knows-where. 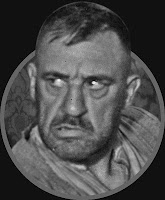 And that was that, although I'd love to hear from people who might have some knowledge of the family. In the years I've been doing silent film in this part of the world, among the people who've turned up at screenings were director William Wellman's daughter (a New Hampshire resident), a guy who appeared on stage with Gloria Swanson in the 1970s, the niece of pop-eyed Hal Roach comic Jimmy Finlayson, and a woman who claimed to be the daughter of Jackie Coogan's stunt double in 'The Kid' (1921).

There was no way to prove or disprove this last claim, but she earned a round of applause, too.

So if you know about Walter Long's New Hampshire origins, please be in touch. Right now, the Long story is pretty short.

And geez, just now I went and looked at Wikipedia, and it has Walter Long being born in Nashua, N.H., a mill city a bit further east.

As for the music: I had trouble settling into 'Yankee Clipper' in part due to external factors. On the drive to the theater, I got a phone call with news that a long-time friend's mother had just passed away. And while mowing the lawn the day before, I had jammed my right thumb onto a twig, embedding a painful splinter deep under the skin. Ouch! Also, I had hoped to preview the film at least one more time in order to arrange for some exotic settings for some of the sequences in China, but it didn't happen.

So I was a little distracted going in, and showing Buster Keaton's excellent comedy short 'The Boat' (1921) didn't help. I don't know what it is about that Keaton short, but it never gets the laughs I think it should. And that always throws me a bit, further destabilizing my frame of mind going into the main feature.

For 'Yankee Clipper,' I had what a thought was a sturdy 6/8 "nautical" tune that could really anchor (har!) the score. But every time I launched the theme, it never seem to go anywhere and didn't seem to fit the picture very well, either. I did finally produce some effective music during the shipboard scenes: nice rolling arpeggios underneath sustained notes that cycled through patterns that worked well with the on-screen intrigue.

But things got really loose and sloppy during the big storm scene that followed, and the score never seemed to jell after that. I did the best I could to create some excitement during several action sequences that followed. But as the film headed for the conclusion, I was far from satisfied.

What I thought was an uneven performance met with a nice round of applause, but then the house lights failed to come up. It was just one of those afternoons, I guess.

So I wasn't prepared when several people, including some first-timers, to come up afterwards and rave about the score and how it brought the movie to life. Really? I was gratified to hear this, of course, and thanked them for their kind comments. I've learned to refrain from bringing up what I happen to think, as it often doesn't correspond to the impression that an audience takes away.

This happens often enough for me to have a name for it: I call it the "perception gap." Maybe I'm too close to the music, or perhaps too aware of what I'd hoped to do instead of what I just did. But it's often the case that people say they've really enjoyed something that I thought was clearly sub-par.

Well, it goes back to cardinal rule of showbiz: Never apologize. And so far, no one has thrown anything, so I take that as a good sign.