And the three best silent films ever made are...

Or so sayeth 'Entertainment Weekly' magazine, which this week published a piece headlined "100 Greatest Movies of All Time." 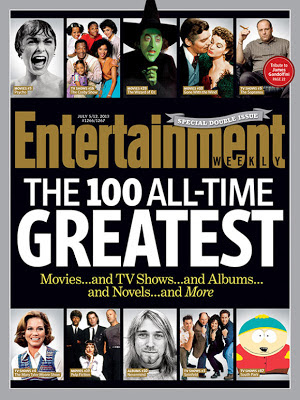 I was glad to see at least a few silents on the list, and with two quite high up: 'Gold Rush' was No. 8, and 'Sunrise' was No. 30. 'Intolerance' placed mid-pack at No. 50, still pretty impressive for a film from 1916 and the oldest flick on the list.

Three out of 100 ain't too bad in a pop culture magazine survey that I expected to be loaded up with films from the past 20 years. It was actually a good, well-rounded mix of films from all eras of cinema, and had room for 'ferrin' films, too.

A college friend of mine, a classic film buff who now teaches philosophy, despairs of talking cinema with students today because many believe that movies started with 'Star Wars' (1977), and that anything prior to that is not to be taken seriously, especially if it's in black and white.

I'm not sure how widespread that attitude is. My own encounters with college students (I teach writing at the University of New Hampshire) has found them a little more well rounded and open-minded as well. Still, people of any age won't develop an interest in past cinema if they never have a chance to be exposed to it.

That's what happened with me, courtesy a junior high music teacher who would bring in 16mm prints of the Chaplin Mutuals and run them during study hall. And I hope the same thing happens at some of the screenings I do here and there.

And of course it helps when a mainstream magazine like Entertainment Weekly includes silent films and other classics in its surveys. Bravo to them!

Here's a link to the results online: http://www.filmsite.org/ew100-2013.html. Apparently there's been some shifting around of silents over the years, with 'Battleship Potemkin' (1925) and 'Nosferatu' (1922) having appeared in prior years.

Okay, after a lull, it's back to the keyboard this week with four screenings in four states in six days. On the calendar:

• Saturday, July 13, 7 p.m.: 'Orphans of the Storm' again, this time at Brandon Town Hall and Community Center in Brandon, Vt.

Detailed info about each screening can be found on the "Upcoming Screeenings" page. Just click on the link at the upper right of this page.

Me, I'm excited by all of them. 'Burn 'Em Up Barnes' is a follow-up to another Johnny Hines comedy, 'Conductor 1492' (1924), which got big laughs when we ran it this past March to mark St. Patrick's Day. We'll see if Hines was a flash in the pan or if he has any staying power with 21st century audiences.

'Orphans of the Storm' is a Griffith epic that you simply must experience with an audience and in a theater to get the full impact of Griffith's story-telling abilities. No one knew better how to structure a story to stir up a crowd, and for sheer excitement, the race-to-the-guillotine finish of 'Orphans' rivals the climaxes of 'The Birth of a Nation' (1915) and 'Way Down East' (1920).

And with 'Ben Hur' (1925), not only will it be a great to see it in 35mm on the Somerville's big screen, but as a prelude we're also running a 16mm print of the 1907 Kalem version of 'Ben Hur.' It runs all of one reel and features parts of Brooklyn as the Holy Land.

Well, to some Dodgers fans, Brooklyn still is the Holy Land.