Last night's silent film program at the Leavitt Theater in Ogunquit, Maine allowed me to make the acquaintance of Michael J. Spencer, a filmmaker and author who happened to be in attendance. Michael has just published a book that sounds very interesting: "Hollywood of the Rockies." 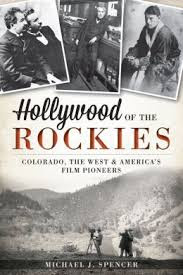 It's about the movie-making that happened in the mountains of the American West during the early years of the 20th century (mostly in Colorado, I gather) before the cinema pioneers decided on southern California as the place to settle.

I know close to nothing about this period of non-Hollywood filmmaking, except that Jacksonville, Fla. was another place that for a time was popular with early filmmakers. So I'm looking forward to reading Michael's book, which seems like piece of good work judging by the excerpt on Amazon. Check it out!

This weekend brings several silent film programs, including a pair of screenings at Red River Theatres in Concord, N.H. and the latest installment of our summer series of silent sea-faring swashbucklers at the Wilton Town Hall Theatre in Wilton, N.H.

In Wilton, it's 'The Seahawk' (1924), a great adventure film that I've done before and I think holds up really well. Hoping for a good crowd to help it all come to life. Showtime is on Sunday, July 28 at 4:30 p.m. If you'd like more info, here's the press release that went out earlier this month... WILTON, N.H.—It was among the first feature films to take movie audiences both out to sea and back in time. ‘The Seahawk,’ a motion picture brimming over with vintage sailing ships, pirates, action, and romance, set the stage for generations of swashbuckling adventure films to come.

'The Seahawk' (1924) will be shown with live musical accompaniment on Sunday, July 28 at 4:30 p.m. at the Wilton Town Hall Theatre, 40 Main St. in Wilton, N.H. THe show is free and open to the public. It's the latest installment in the Town Hall Theatre's summer-long series of sea-faring silent films.

"In warmer weather, many people head to the ocean to cool off," said Jeff Rapsis, who provides musical accompaniment for the Wilton Town Hall Theatre's silent film screenings. "This summer, we're bringin the ocean to our audiences, as we showcase the enduring romance between Hollywood and stories set at sea." 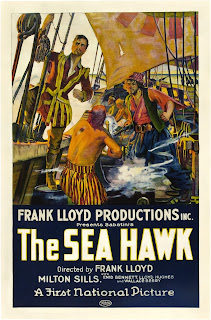 The 1924 silent version of ‘The Sea Hawk,’ based on a 1915 novel by Rafael Sabatini, follows the 1580s adventures of English nobleman Oliver Tressilian, forced by fate and honor from his upper class life and sold into slavery as a galley oarsman. After escaping, Tressilian gets revenge by assuming control of ‘The Sea Hawk,’ a pirate ship that terrorizes the Spanish armada, all the while trying to regain his lady love.

Cast in the lead role of Oliver Tressilian is Milton Sills, a popular actor of the silent film era who is relatively unknown today; the ‘Seahawk’ is ranked among Sills’ finest performances. Also in the cast is longtime Hollywood character actor Wallace Beery, who plays the role of Captain Jasper Leigh.

The movie is considered a landmark of realism due to producer/director Frank Lloyd’s decision to not use models or miniatures, but to stage all ocean-going scenes on recreated sailing ships off the California coast. This enabled Lloyd to line the decks with cutlass-waving actors and to convincingly depict the oaring of a slave-powered galleon, scenes which thrilled audiences of the time.

The battle scenes were regarded as so successful that they were used intact for the later sound remake in 1940 starring Errol Flynn.

Music for 'The Sea Hawk' will be created live by Rapsis, an accompanist who specializes in improvising scores to classic silent films in live performance. For each film, Rapsis improvises a score from original musical material composed beforehand, using a digital synthesizer to recreate the sound and texture of a full orchestra. 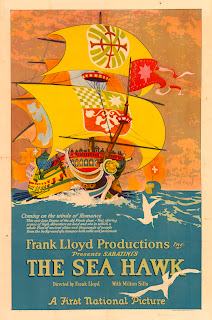 Each of the silent films on this summer's Town Hall Theatre schedule offers a different porthole into the rich treasure trove of tales rooted in ocean-going traditions. Each also offers footage of scenes that in some cases are now quite historic, including images of ships and ship-board life that vanished long ago. With so many great sea-faring films to choose from, an additional screening has been added in August.

Upcoming screenings of silent film with a salty flavor at the Wilton Town Hall Theatre include:

• Sunday, Aug. 11, 4:30 p.m. 'Across to Singapore' (1928). Intense drama of romantic rivalry among brothers in a tight-knit ocean-going family. Starring Ramon Navarro, Ernest Torrence, and a very young Joan Crawford. A rare film that was nearly lost to decomposition but was rescued just in time.

This summer's nautical-themed movies are part of a monthly series of silent films presented with live music at the Wilton Town Hall Theatre. The series provides local audiences the chance to experience silent film as it was intended to be shown: on the big screen, in restored prints, with live music, and with an audience.

The series will continue with a screening of 'The Sea Hawk' (1924) on Sunday, July 28 at 4:30 p.m. at the Wilton Town Hall Theatre, 40 Main St., Wilton, N.H. Admission is free, with donations of $5 per person encouraged to defray expenses. For more information, visit www.wiltontownhalltheatre.com; for more information on the music, visit www.jeffrapsis.com.