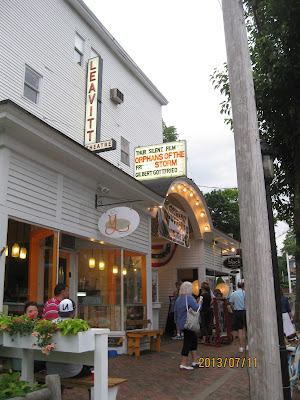 D.W. Griffith's 'Orphans of the Storm' (1921) and Gilbert Gottfried on the same marquee: a billing not likely to be repeated. Apologies for the time/date stamps on these images.

Three epics in four days has me wiped out. That, plus a nice case of poison ivy and (I kid you not) a sprained left pinkie finger, adds up to one spent accompanist.

But still, the show must go on, and so it did: 'Orphans of the Storm' last Thursday in Maine and then again on Saturday in Vermont, and then the original 'Ben Hur' on Sunday in Massachusetts.And that's following a screening of the Johnny Hines comedy 'Burn 'Em Up Barnes' (1921) in Manchester on the Tuesday before.

One thing I enjoy about playing at the Leavitt Theatre in Ogunquit, Maine is that owner Peter Clayton keeps alive many of film exhibitor traditions that were abandoned long ago elsewhere.

Not only does he actively update his marquee, but he goes to the trouble to find and/or reproduce original posters for films, which he then displays on oversized sandwich boards on the sidewalk in front of the lobby. I never expected to see a full-sized poster for 'Orphans of the Storm,' but there it was, out on the sidewalk this past Thursday night, beckoning the curious. 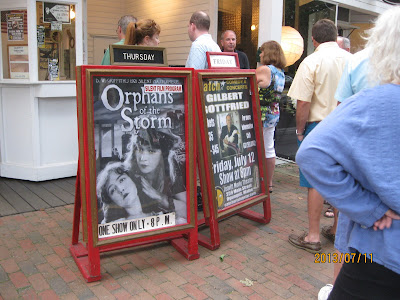 Then there's the cramped ticket booth (visible above), which is straight out of Buster Keaton's film 'Sherlock Jr.' (1924). I've had to man it prior to my own shows, and it's a real throwback to the PDE. (That's "Pre-Digital Era.") Patrons are given numbered tickets, and nightly attendance is tracked by noting the "start" number and the "end" number, and subtracting one from the other. 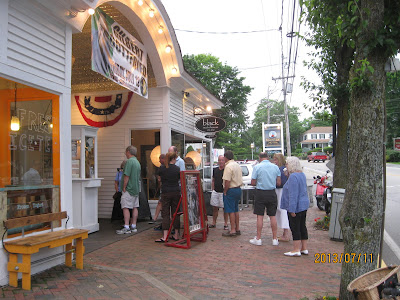 Last Thursday night, it was nice to return to the theater at 7:30 p.m. (a half-hour before showtime) and find an actual line of people waiting to see D.W. Griffith's French Revolution epic. Because Ogunquit draws a lot of visitors from the French-speaking Canadian provice of Quebec, I had thought the film might resonate as a tribute to Bastille Day (on July 14), but the crowd was more cinema buff than French patriot.

The film takes awhile to get to the events of the actual Revolution, so I paced myself in terms of texture. For the pre-revolutionary action, I stuck with harpsichord settings for the upper class and plain strings for the oppressed. Then, when revolution finally erupts in the streets, the switch to a fuller orchestra palette helped underscore the importance.

This strategy worked well enough for me to repeat it on Saturday night for a screening in Brandon, Vt., another one of my favorite places to do music for silent film. (So is the Somerville Theatre, so it was a good stretch in terms of venues.) Unfortunately, we had to compete with the local bluegrass festival, so attendance was a little off. Next year I'll have to see about doing some kind of co-programming such as 'Tol'able David' (1921) or Harold Lloyd's 'The Kid Brother' (1927).

Sunday's 'Ben Hur' screening was notable in part because we ran a 16mm print of the 1907 Kalem one-reel version prior to the full-length epic. What a vivid way to show how far and fast cinema had come in less than two decades!

For the Kalem version, I used a simple organ setting and just winged it. Then, after speaking a bit to introduce 'Ben Hur,' I sat down and started the music before the lights went down. After a short while, they did, and I deepened the intensity, which seemed really dramatic and effective. Then the curtains parted and the MGM lion appeared (in 35mm), and again I notched things up a bit more.

By the time the 'Ben Hur' title appeared on screen, I had reached a natural peak that to me felt just right and said to the audience: YOU ARE ABOUT TO SEE SOMETHING IMPORTANT. You couldn't ask for a better start to a big epic! 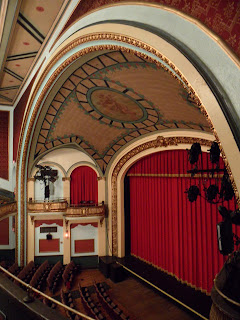 The interior of the Somerville's 'Main House,' where they can still screen 35mm film. I set up my gear in the area just below the stage lip.

For 'Ben Hur,' I have a wide Richard-Strauss-like fanfare figure that I use as a leit motif for Judah, and also for triumph in general. There was also a five-note up-the-scale little motif that was the basis for any music concerning Esther, the main love interest. But other than that, the cupboard was pretty bare going into Sunday's screening, if only for lack of preparation time.

So I was especially blessed when a figure for the Romans (and oppression in general) came to me right at the start, when a title refers to their "clanking" armies. Perfect! And perfectly adaptable—mild for when we first meet Messala, and menacing and soulless for subsequent scenes.

And from those materials I was able to build out a full score that I felt supported the film very well in some scenes. Some of the scenes with Esther worked out particularly well, with the music weaving itself into intensity as things heated up on screen.

Things got a little out of hand during the big sea battle and chariot race—the film's two big showpiece sequences—but that was all part of the excitement, I thought. The area that I should have prepared for a little more was in the synchronization of those big drum beats that drive the galley scenes. They're not steady, and every time you try to match them, by the next cut, you're off. It can be done but it requires a little more familiarity with the scene, I think.

Nice reaction from the crowd, including a silent film newbie who said she never expected it to be so good. Moments like that make this all worthwhile!

Now I just have to rest that left pinkie...