Waiting for 'Beau Geste' (1926),
with apologies to Samuel Beckett 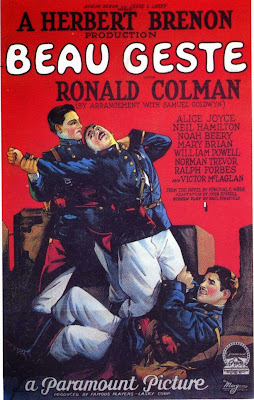 Okay, here's a new rule I'm following from now on. It goes like this:

"Henceforth and commencing immediately, I shall not program a silent film for which I do not have a suitable copy in hand."

The reason for this rule is a recent screening I did of 'Beau Geste' (1926), the great Herbert Brenon version of the classic tale of adventure in the French Foreign Legion.

It was an adventure, all right, but mostly due to my inability to find a decent copy of the film as the days ticked down to a long-scheduled screening.

I had put 'Beau Geste' in the November slot at the Flying Monkey Moviehouse in Plymouth, N.H., where I do a monthly silent film program.

This was scheduled months ago, mostly because I'd never done music for the silent 'Beau Geste' before, and also because the time between Halloween and Thanksgiving would be good for a rousing adventure in an exotic locale.

At the time, copies seemed to be freely available online, so I assumed I could just pick one up. And then, of course, I forgot all about it.

Then last month, I was reviewing my schedule and realized 'Beau Geste' was coming up, and that I'd never gotten a copy.

A quick look online found copies available from resellers on Amazon.com. So last last month, I ordered one, thinking I would get it in plenty of time before the screening on Wednesday, Nov. 20. 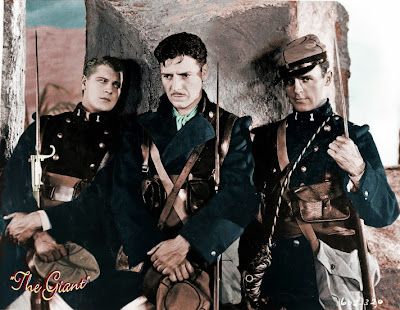 A scene from Beau Geste (1926) that depicts what it was like waiting for my copy of the film to arrive.

Well, October turned to November (funny how that happens) and at some point I got an e-mail that my order had shipped. Great! Unfortunately, the window of delivered was listed basically as any day up until Wednesday, Nov. 20—the day of the screening! And alas, it had been shipped via U.S. Postal Service, so there was no way to track it.

So I waited, growing just a little more anxious each day that it failed to arrive. Finally, two days before the screening, I couldn't wait any longer and decided to take action. I began calling other distributors to see if anyone had a copy of 'Beau Geste' that could be overnighted to me.

After a day not getting through to anyone, on Tuesday afternoon I finally reached a guy in Maryland. I was in luck, he said, because they were just getting ready to go on vacation in two hours, but he'd be happy to drop 'Beau Geste' off at the post office that afternoon on his way to the airport.

The post office!? Well, it was the only option, so I took it.

And sure enough, the next day (the day of the screening), it arrived at my business office via U.S Postal System's overnight delivery option. Thank God! I brought it home at mid-day and popped it into a DVD player. The guy had described it as "watchable," and it was, though a far cry from the visual quality I would normally shoot for in scheduling a film. But with four hours to go before showtime, I wasn't in a position to complain.

Our audience that night (a less-than-typical turnout of just 24 folks) enjoyed 'Beau Geste,' even though the visual quality was sub-par and I had to play the film cold. ("Uh-oh! He's picking up the trumpet again to play...'Taps' this time!) I had seen the film years ago, but was still surprised at how much music factors into it, including a rousing 'Desert Soldiers' fight song that comes up several times.

And on Friday, two days after the screening, guess what arrived on my doorstep? Yes, the original order of 'Beau Geste' had arrived, two days past the promised date. And yes, it was a better transfer, so I'll probably use it if I ever program the film again.

Now that I have a copy, it's fair game!

But the lesson from this has coalesced into a new rule I intend to observce: never again will I program a film that I don't actually have in hand.

I'd rather join the foreign legion!