Thoughts on screening 'The Last Command'
at Molloy College: Who is acting? Who is real? 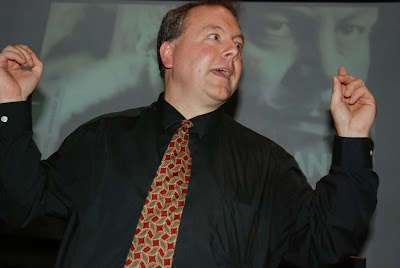 Here I am, picking Emil Jannings' nose, prior to a screening of 'The Last Command' (1928) at Molloy College.

Postponed for an entire year by Hurricane Sandy, a screening of the Josef von Sternberg drama 'The Last Command' (1928) finally took place on Thursday, Nov. 7 in the Hays Theatre at Molloy College.

Let me say right up front that it was not the easiest screening. Tech issues almost prevented the show from going on at all. However, thanks to the efforts of Karl Mischler (a regular at the Kansas Silent Film Festival, but a resident of Glendale, Queens who came out for this program), we were able to get the film going about a half-hour behind schedule.

Karl mentioned later that one reason the film wouldn't play was that the disc we were using had a giant thumbprint on it. He wiped it off, which proved to be a crucial step in allowing the program to proceed. I couldn't help but imagine the apocalyptic reaction of high-strung director von Sternberg to the idea that his film was being held hostage by someone's greasy thumbprint.

Because of all the distractions, by the time the film started, I was in nowhere near the mental state needed to attempt to pull off some of the more ambitious texture changes I had planned. Instead, I simplified to just a standard orchestral setting, which helped me concentrate on the music as music. I must say, though, the first 10 minutes were a rough go.

The only "extra added attraction" that survived was the ringing of a brass bell that I used during the "revolution" scenes in which a character, sure enough, rings a brass bell to get everyone's attention. Prior to the screening, I couldn't remember when this happened in the film, but was able to review this sequence on a computer in the Molloy College Philosophy Department. There! Just after a guy gets hung, a cue that's hard to miss. So I was able to nail it during the performance, and it proved pretty effective, I thought.

My college classmate Michael Russo, now a professor of philosophy at Molloy (and organizer of this screening), was kind enough to send along a few photos of the accompanist in action. Thanks, Mike! However, I'm disappointed that he didn't apply the "handsome" filter that I find is more necessary as time goes by.

A GALLERY OF THE ACCOMPANIST 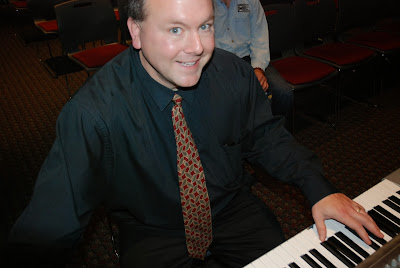 Relatively normal shot prior to the performance. 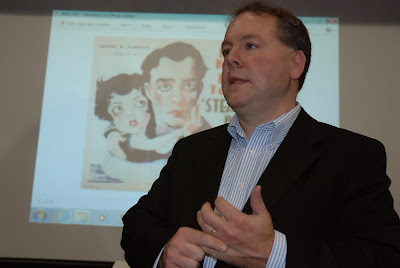 Me mouthing off to students at a seminar earlier in the day. That's a promo poster for Buster Keaton's 'Steamboat Bill Jr.' in the background. 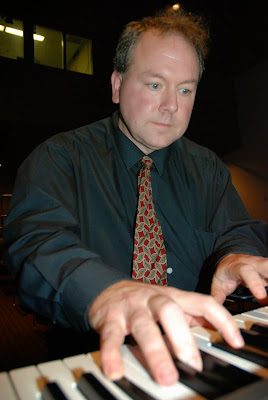 Trying hard not to get my fingers tangled up during a complicated passage. 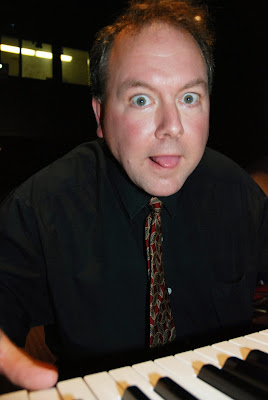 What I probably look like most of the time I'm behind the keyboard.

Okay, enough of that. But I do want to set down a couple of thoughts about 'The Last Command,' a film that impresses me more every time I encounter it.

SPOILER ALERT: The analysis below will totally spoil the film if you haven't seen it. Beware!

After the movie was over, a couple of folks said they didn't understand the ending. Why would director Lev Andreyev (William Powell) be sympathetic and even respectful to Sergius Alexander (Emil Jannings), a former Czarist general who stole his girl and unjustly imprisoned him a decade earlier?

The answer, I think, goes to the heart of what 'The Last Command' is all about. Yes, on the surface, it's a story of the Russian Revolution, with a parallel story of a Hollywood movie about the Russian Revolution being made not long after. That alone sets up all kinds of complex possibilities for irony and so on.

But the core drama of 'The Last Command' is one that hinges on personal integrity and character. The film frames it as a question: "Who among us is truly himself, and who is merely acting a role because he or she is ordered to do so?"

'The Last Command' is filled with scenes, both in Russia and Hollywood, of people acting under the orders of others. It's a dynamic that occurs frequently. Soldiers respond to commands. Extras respond to the cattle call. (In a meta sense, the movie itself is the result of a lot of people following orders of director von Sternberg, a notorious tyrant on set.)

By the way, the movie makes no judgment about people in the position of following orders. After all, it's a position that most of humanity finds itself in. It's a natural state of the human experience, rather like the laws of physics. No one is exempt: Even Sergius Alexander (Jannings), at the height of his power over the Russian military, is forced to engage in "play-acting" when the Czar orders ceremonial troop reviews at a time when troops can least be spared from the front. "The show is almost over," he remarks to an underling with an urgent message.

So no matter what's going on, life takes place in a web of relationships in which some people possess power of some sort over others. In 'The Last Command,' this dynamic is visually represented by the act of smoking and lighting matches. Watch for how the etiquette of lighting a cigarette (who does what for whom) appears again and again--at first comically when director Andreyev is greeted by a half-dozen underlings vying to light his cigarette, and then again and again throughout the film as relationships between characters are established and then change.

But back to the core drama. To be truly yourself, and to be true to yourself, is never easy, and was no less so during the Russian Revolution as depicted in 'The Last Command.' Even so, it's a core component of what in us is noble and worthy of respect. Being true to yourself instead of following orders you don't believe in: one wishes this film would have been more popular in pre-Nazi Germany, where great atrocities would soon occur because people were "just following orders."

Also, what we do with any power we have over others speaks volumes about our character and who we really are. Do we abuse the power for power's sake, or does our use of it reflect our true beliefs? And what is the effect of our power on those who are subject to it? It can be argued that successful navigation of all this--being true to one's self, and not abusing power--is a prerequisite for being a hero.

For Andreyev (Powell), the price of being himself and speaking his mind to Sergius Alexander is getting struck in the face with a whip, having his woman taken from him, and then indefinite imprisonment. But the price of not being himself would perhaps be worse: a betrayal of what he believed in (the Revolution) and a loss of self-respect.

For Sergius Alexander (Jannings), the price of being true to his beliefs about what is right for his people and his nation is even more drastic. The Revolution robs him of everything—his position, his stature, his health, and the woman he stole from the future director. He is reduced to a shell of his former self, living in a rooming house, his swagger transformed into a pathetic nervous head twitch.

So, 10 years later, why should now-all-powerful Hollywood director Lev Andreyev care at all about again Sergius Alexander, who washes up at the studio as an extra? And why should he treat him with something bordering on sympathy?

The way I see it, filming a Hollywood battle scene with Sergius Alexander placed in charge of the troops is arranged as a kind of final exam for the Jannings character. Even after a decade of hardship and humiliation, what is the General made of? What does he truly believe in? Were his actions a decade ago rooted in his character and what he truly believed, or merely an abuse of power for power's sake? The movie set provide Andreyev with a laboratory to settle the question once and for all.

Jannings, by going berzerk, passes the exam with flying colors. During the Revolution, he was not acting after all. And after all was taken away, he could not change what he truly believed (his love for Russia, and that the Revolution was led by traitors), no matter what circumstances he found himself reduced to. (This commitment was symbolized in part, again visually, but the modest medal from the Czar that he continues to wear throughout the film.)

As such, after collapsing on the set, the General earns the reward of being assured, in the arms of the director (by no coincidence, a God-like figure) that he won after all. This is not a very elegant comparison, but to me it's a moment very similar to the ending of the 1971 "Willy Wonka" movie, where Gene Wilder tells young Charlie Bucket that he passed the test (by being honest) and thus won the factory. (Although in 'The Last Command,' his reward is not a candy factory, but a peaceful death.)

All this is handled very poetically, forming a subtext to a film that boils with surface action and tension and dramatic ups and downs. Through it all, we're not hit on the head with any lesson. Instead, it can be seen throughout the movie, if only we are perceptive enough to recognize it for what it is, and what it is adding up to.

If you pick up on the imagery, it enriches the film immensely. When Sergius Alexander stoops to light the cigarette of the young revolutionary Natasha (Evelyn Brent), you know trouble is brewing. So what could have been a fairly pedestrian war story is instead arranged as a great visual study of some fundamental questions that we all face, whether or not we realize it.

What does it mean to have power over another? And who among us is acting? And who is real?

All of this is made clear, I think, in the final intertitles, in which an assistant director observes callously that the Jannings character was a great actor, and Powell replies that he wasn't just a great actor, but "a great man."