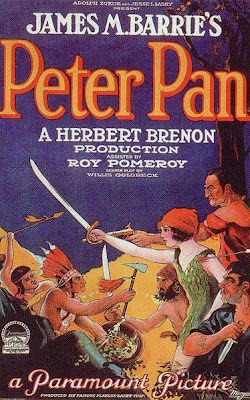 Whenever I do music for the silent film version of 'Peter Pan' (1924), I try to conjure up my own reaction to the film when I first saw it.

This happened in 2000 at the Kansas Silent Film Festival in Topeka, Kansas. It was the first time I'd ever gone out there, primarily to hear the Mont Alto Motion Picture Orchestra live. And one of the films they were playing for was the silent version of 'Peter Pan' in 16mm.

I was unfamiliar with the film, but was just beginning to grasp the scale and scope of what silent cinema encompassed. And I remember being beguiled right from the start by the family dog Nana, played by a guy in a cleverly designed dog suit. To me, it perfectly set the tone of fantasy in all that was to follow.

And on that, the film really delivered. It was just one visual surprise after another. Not even the mistaken reverse threading of a reel during the performance (rendering the titles into something that looked like Czech) was enough to break the spell. It really opened my eyes to how rich the silent era was with treasures that were yet unknown to me.

In the past few years, I've done my own music for 'Peter Pan' many times, and for each performance I try to remind myself of that sense of wonder I had when I first encountered it. I think the key to replicating that feeling is to keep things very simple at first—on the level of a nursery rhyme. After all, author J.M. Barrie urges us to think back to when we were children, and music can really help in that regard.

Ususally my accompaniment is heavy on improv. But with 'Peter Pan,' I've developed some music that I think works well, so the score will be a little more structured than usual. Still there's always room for surprises and in any case it's never quite the same way twice no matter how much I plan ahead.

We'll see how things evolve, as I have no less than three separate screenings of 'Peter Pan' to accompany in the next month. There's the 35mm screening at the Somerville (Mass.) Theatre on Sunday, Nov. 17 at 1 p.m.; then a showing during Thanksgiving Day weekend at Red River Theatres in Concord, N.H. on Saturday, Nov. 30 at 7 p.m.; and then a screening at the Statford (Conn.) Library on Sunday, Dec. 15 at 4:30 p.m.

More info on the Somerville screening is below in the form of the press release that was sent out to Boston area media. Hope to see you there, as this is a definitely a film where a big audience makes a big difference. 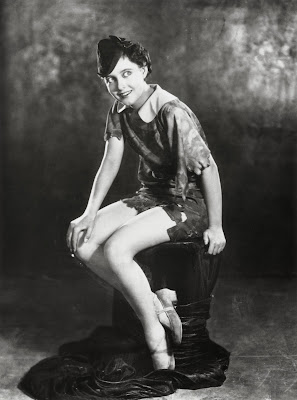 Hold the peanut butter: Long before the image was used for commercial purposes, Betty Bronson's portrayal of Peter Pan created an enduring image for a world of movie-goers.

SOMERVILLE, Mass.—It was the film that introduced movie-goers to visions of flying children, magical fairies, human-like animals and menacing pirates. It was the original silent film adaptation of 'Peter Pan,' a picture personally supervised by author J.M. Barrie. The film became a major hit when released in 1924, with audiences eager to get their first big-screen look at the wonders of Neverland.

Boston-area movie fans can see for themselves when the first 'Peter Pan' (1924) is screened with live music on Sunday, Nov. 17 at 1 p.m. at the Somerville Theatre, 55 Davis Square, Somerville, Mass.

'Peter Pan' will be screened in the Somerville's main theater using a 35mm film print. The program will be accompanied live by silent film musician Jeff Rapsis. General admission is $15 per person, with discounts for seniors and children.

'Peter Pan' is the latest in a monthly series of silent film screenings in 35mm with live music at the Somerville Theatre. The series aims to show the best silent films in the way that caused people to first fall in love with the movies—on the big screen, in a theater, with live music, and with an audience.

"We're thrilled to be presenting this great movie in our main theatre, where familes can come together and experience it in a way that's impossible to duplicate in a home entertainment center," said Ian Judge, manager of the Somerville Theatre. "The original 'Peter Pan' contains enough timeless magic to get everyone in the mood for the coming holidays."

Thought lost for many years, and overshadowed by more recent adaptations, the original silent 'Peter Pan' maintains its freshness and charm more than 80 years after its original release.

In the story, first presented as a stage play in 1904, three children in London are visited one night by Peter Pan, a youth in search of his shadow. Pan shows his new friends how to fly, and then convinces them to join him in a journey to Neverland.

There they encounter Indians, mermaids, and a band of pirates whose leader, Captain Hook, is Pan's sworn enemy. The children are captured by Hook and taken prisoner aboard his pirate ship, setting the stage for an epic battle, the outcome of which will determine if the children may ever return home.

Though the Peter Pan story is well-known today due to subsequent adaptations (and also merchandising that includes a ubiquitous brand of peanut butter), the tale was virtually new when Hollywood first brought it to film in the early 1920s. In England, author Barrie gave his blessing to the adaptation, though he retained control over casting and insisted that any written titles in the film be taken directly from his own text.

After a major talent search, Barrie settled on unknown 18-year-old actress Betty Bronson for the title role, and filming began in 1924. The role of Captain Hook was played by noted character actor Ernest Torrance, who invented the now-iconic villainous priate persona that would become a Hollywood legend.

The film's highlights include special effects that maintain their ability to dazzle even today. The film's memorable images include a group of mermaids entering the sea, a miniature Tinkerbell interacting with full-sized children and adults, and a pirate ship lifting out of the water and taking flight.

'Peter Pan' also includes a cast of animal characters played by humans in costume, including the family dog Nana and an alligator who serves as Hook's nemesis, lending the film a magical quality.

After the film's release, no copies of the original 'Peter Pan' were known to exist, and for many years the film was regarded as lost. However, in the 1950s a single surviving print turned up in the George Eastman Archives in Rochester, N.Y., from which all copies today have descended.

'Peter Pan' will be accompanied by local musician and composer Jeff Rapsis, who has prepared new material to go with the picture. "Silent film was intended to be screened with live music that not only supported the action, but clued in the audience to changing moods and scenes," said Rapsis, a New Hampshire resident. "I hope this new music will help bring to life the film's special qualities of fantasy and child-like wonder."

‘Peter Pan’ will be shown in 35mm and with live music on Sunday, Nov. 17 at at 1 p.m. at the Somerville Theatre, 55 Davis Square, Somerville, Mass. Admission is $15 per person. For more information, call (617) 625-5700 or visit http://www.somervilletheatreonline.com. For more information about the music, visit www.jeffrapsis.com