On the road for 'The Last Command'
at Molloy College on Thursday, Nov. 7 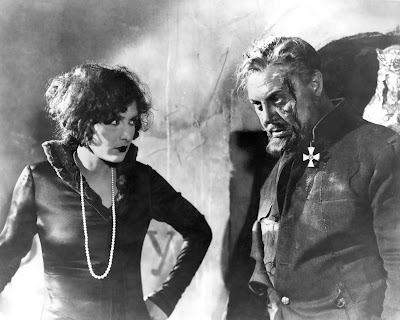 Evelyn Brent sports that all-important string of pearls given to her by Emil Jannings in 'The Last Command' (1928).

'The Last Command' (1928) is one of those films that seems to reveal new things about itself, and about life in general, every time I encounter it.

Made at the very end of the silent era, when filmmakers were taking the expressive power of visual story-telling to its highest level, 'The Last Command' (directed by Josef von Sternberg) is a rich treasure trove of allegory, story, irony, drama, and just plain all-around great cinema.

And the work of Emil Jannings as a Czarist general caught up in the Russian Revolution—a towering performance that won him the first-ever Academy Award for Best Actor—remains flat-out amazing, even to modern eyes. It's also a treat to see William Powell in a significant early role, and I don't think I could ever get tired of looking at Evelyn Brent as a flag-waving Russian revolutionary.

I'm reminded of all this because I'm preparing to head down to Molloy College on Long Island to do music for a screening of 'The Last Command' on Thursday, Nov. 7.

I'm looking forward to this one not only because it's 'The Last Command,' but also because the audience is likely to be folks not very familiar with silent drama of this stature. So it's a real rush for me to help bring a film such as 'The Last Command' to life in this kind of situation.

However, there's also some pressure involved. If I have an off night or somehow screw up with the music, I could diminish 'The Last Command,' and by inference all silent film, in front of a lot of people who haven't had much exposure to it.

But this apprehension pales in comparison to my eagerness to share this film with others, come what may. Among its other virtues, the story of 'The Last Command' is driven by big emotions that are at the root of my own attraction to silent film.

True, I may never go through what Grand Duke Sergius Alexander (Jannings) experiences. But as a member of the human race, for better or worse, I feel things. And I think I feel them strongly, at least in terms of my own frame of reference. It might be joy, it might be despair, it might be anything in-between. But I feel. I am not made of stone. Over the years, I've come to terms with this range of emotions (which are not always pleasant) as an important part of what it means to be truly alive. 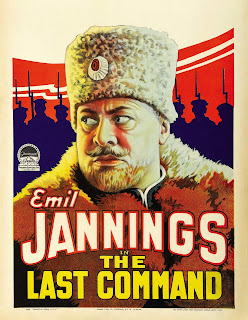 And silent film, if you let it in, celebrates those kinds of feelings by bringing them out and exploring them in a very direct manner. By its very nature, the visually based story-telling of silent film turned out to be very good at harnessing the big emotions that we all feel in some way, and making use of them to connect with an audience. So, in watching a well-made silent film and letting it get to us, we all collaborate in a kind of emotional catharsis.

And it makes sense that this would be the case, because at its best, silent film deals with emotions that can become so powerful that words would only get in the way. Music, also suited for big emotions, plays a powerful supporting role, or at least can when everything's working. And all this happens in a way to which I respond very strongly, and inspires my desire to introduce and share the experience with others.

I sometimes joke that my way of doing music for silent films is a public form of psychological self-therapy. It helps me cope, and if I didn't have this outlet, this impulse might surface in ways that society finds less acceptable, such as spray-painting bridge abutments.

But when I think of what the people who made 'The Last Command' and 'Wings' and 'The Big Parade' and other great films of the silent era were able to achieve, and how I respond to them, then I realize it's not completely a joke.

So creating music for silent films and helping them connect with modern audiences is my way of spreading the notion that to feel is at the root of what it means to be human. And I think that's important whether it's 1928 or 2013 or 355 B.C.

I think as more time goes by, the best silents will be recognized for how they can show us what's timeless about the human experience. It may be a bit too early for this to be apparent, but I think it's a major strength of silent cinema. We'll see as the years go by, as they inevitably will.

For now, in going down to Long Island to accompany 'The Last Command' and doing other screenings all over the place, I'm a sort of Johnny Appleseed character, spreading not seeds but opportunities for people to let out their emotions.

I should probably work out a sponsorship deal with Kleenex.

While I work on that, here's the text of the press release on 'The Last Command' that has all the details of the screening on Thursday, Nov. 7. Hope to see you there! 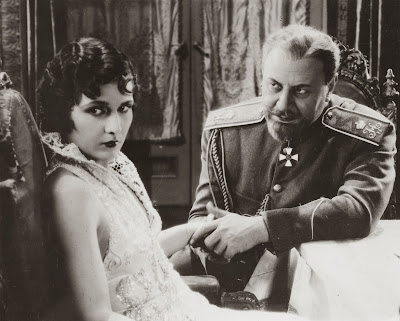 Evelyn Brent and Emil Jannings get to know each other in 'The Last Command' (1928).

Admission is free and the event is open to the public.

Live music for the screening will be provided by Jeff Rapsis, a New Hampshire-based musician recognized as one of the nation's leading silent film accompanists.

Rapsis will create the film's score live as the movie is shown by improvising music based on original melodies created beforehand.

Rapsis accompanies films using a digital synthesizer to recreate the texture of a full orchestra. He has performed live film scores at events ranging from the Kansas Silent Film Festival to the Cinefest vintage film convention in Syracuse, N.Y., and most recently collaborated with Academy Award-winning film historian Kevin Brownlow on a silent film program at the University of Arkansas at Fayetteville. 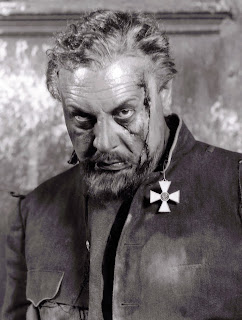 'The Last Command,' directed by Josef von Sternberg, tells the sweeping story of a powerful general in Czarist Russia (Jannings) forced to flee his homeland during the Bolshevik revolution. He emigrates to America, where he is reduced to living in poverty.

Finding work as an extra at a Hollywood studio, the former general lands the part of a commanding officer in a movie about the revolution, causing flashbacks to his traumatic experiences. The conflict leads to a spectacular climax and a towering performance that earned Jannings 'Best Actor' honors.

"Dramas such as 'The Last Command' were created to be consumed as a communal experience," Rapsis said. "With an audience and live music, they still come to life as their creators intended them to. This screening at Molloy College is a great chance to experience films that first caused people to fall in love with the movies."

'The Last Command' (1928) will be screened with live music on Thursday, Nov. 7 at 7 p.m. at the Hays Theatre, Wilbur Arts Center, Molloy College; 1000 Hempstead Ave., Rockville Centre, N.Y. Admission is free and the screening is open to the public. For more information, visit www.molloy.edu or contact Prof. Michael Russo at (516) 323-3345. For more information about the music, visit www.jeffrapsis.com.