Report from 'Arisia 2014' film room:
You were expecting a Hunchback?

Okay, back in the silent film saddle after three weeks away from the keyboard bopping around southern India.

First screening was Friday, Jan. 17 at "Arisia," a four-day confab billed as New England's largest sci-fi/fantasy convention. Held each year at the Westin Hotel in Boston, it's one of my favorite events on the calendar because of the luminaries with whom I get to mingle: 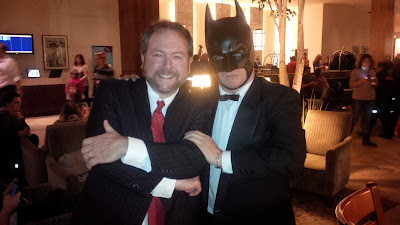 I tell ya, the life of a silent film accompanist is just one glamorous encounter after another. That's me on the left.

Each year Arisia features a film room where they run honest-to-goodness actual 16mm film and even some 35mm for the entire four days. When they started this 25 years ago, home video was still in its infancy (VHS still battling Betamax), and so it was still a rare treat to see film of any type outside of a theater.

Well, they've kept running film all this time, and by now what's old is new again: the all-film program is a unique hold-out from an earlier era, and somehow fits quite well into the offerings at a sci fi/fantasy gathering.

And each year they run at least one silent with live music. A few years ago, I was asked to come down to accompany Keaton's 'The General' (1926), and it went well enough for me to be asked back each time.

I'm glad, as it gets me in front of audience that doesn't usually see a lot of silent film, but is open to new things, or maybe things so old they're new again. (See above.) Consider a blurb for this year's convention that ran in the Boston Globe this week:

"Some of the top picks include New England’s largest Masquerade competition, an art show where participants can purchase sci-fi/fantasy art pieces, graceful period dances, a showing of the silent film The Hunchback of Notre Dame accompanied by live organist Jeff Rapsis, and a gender-reversed presentation of Star Trek’s “The Trouble with Tribbles.” There truly is something for everyone."

Rats! I'm sorry I missed that gender-reversed presentation of Star Trek’s “The Trouble with Tribbles.”

Despite the often battered and splicy prints turned up by the film crew, the screenings draw a good crowd and always provoke a lively reaction. Last year, a showing of 'The Lost World' (1925) was highlighted by full-throated cheering by the audience near the end, when the dinosaur gets loose and starts ravaging the streets of London, sowing the seeds for generations of stop-motion action to come. 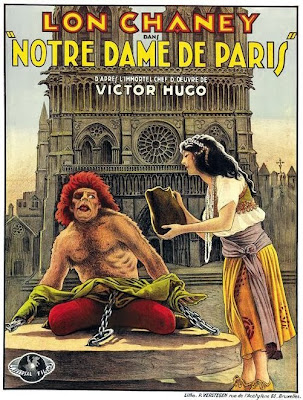 What we thought we were getting...

This past Friday night, after getting all my gear into the hotel (no easy task, having to dodge guys with giant sabres and courtesans from the future) and outside the film room for the 10 p.m. showing, I found there was a change in plan. The print of 'Hunchback' never arrived! So, at the last minute, an old print of Chaplin's 'The Gold Rush' (1925) was to be screened in its place. 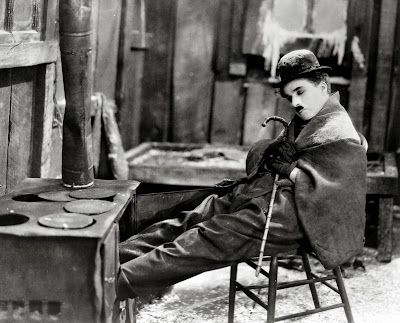 ...and what we actually got.

Wow! Nothing like a sudden shift of program to help you get over a 10.5-hour time difference. The good news is that no one in the audience of about 40 people seemed to be disappointed when I announced the switch. The bad news is that I had plugged my synthesizer and sound equipment into the same jury-rigged line that fed a pair of colored spotlights at the base of the screen.

So, when the movie (and the music) started, the lights then went down, taking the music down with it. Ooops! So we had to stop while I figured out a better way to set things up. I was a little concerned because the old Korg isn't designed to be powered down by a variable dimmer switch, but it fired right back up again and off we went.

Gotta add that to the list of things to watch out for: don't plug your stuff into something that's going to be shut off while the movie's running. Duh!

But once underway, Chaplin prevailed, even in a dupey old print that left my eyes tired just watching it. It says something for the strength of silent film (and for what Chaplin accomplished in particular) that reaction was strong, even if the film didn't look nearly as good as it should.

One of my New Year's resolutions is to find more time to prepare for screenings, and so I did go through 'Hunchback' prior to the screening. That won't go for naught, as we're running the film later this week, on Thursday, Jan. 23 at the Flying Monkey up in Plymouth.

But if we have to run 'The Gold Rush' up there as well, I'm ready for that, too.