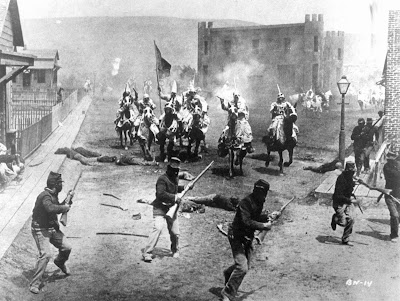 The Klu Klux Klan in a scene from D.W. Griffith's 'The Birth of a Nation' (1915), which I screened to mark Martin Luther King Jr. Day.

Two great screenings in two days: 'The Birth of a Nation' (1915) at Merrimack College in North Andover, Mass. on Wednesday, Jan. 22, and then 'The Hunchback of Notre Dame' (1923) at the Flying Monkey Moviehouse in Plymouth, N.H. on Thursday, Jan. 23.

I'm definitely feeling back in the swing of things after returning from several weeks in the fascinating nation of India.

More screenings coming this weekend, but now it's time to get something off my chest.

'The Birth of a Nation' is a ground-breaking film, but it's also full of racism. Each January, I try to program the picture around Martin Luther King Jr. Day as a way to show how far we've come. And I take pains to explain this in advance in press releases and blog posts and so on.

Most people seem to understand this. But earlier this month, when I sent out a quick e-mail listing upcoming screenings, I did not provide all the necessary context. I thought the links to more info elsewhere online would be enough.

Well, I was mistaken. Almost immediately in response, I received this note from someone on my e-mail list:

To pick Birth of a Nation as a tribute to MLK when there are so many positive films? And so many racists that will get encouragement from this- esp in mostly lily white NE?

You can't rationalize this away.

Put yourself in the place of a black person. Or a black parent esp.

You really fucked up. Big Time.

I used to enjoy your presentations

Probably not any more. And I'm forwarding my stance and your amazing lack of humanity to many others.

You are a disgrace with no perspective who doesn't recognize his own inner racist to do this.

Wow! Kinda harsh, don't you think? I didn't know who wrote this, as I don't keep records who gives me their e-mail address.

Still, I was compelled to reply:

Wow, sorry you feel that way!

My two cents: I've actually done 'Birth' as the centerpiece of several MLK tributes in recent years. I've found it works very well as a way to show what Dr. King and others were up against in the struggle for justice. It doesn't promote racism. It celebrates the magnitude of the struggle against it.

That's especially true in New England, where we never had to deal with some of the things shown in the film, even though we're a part of the same nation. So maybe it's more important to show it in "lily white" New England. I grew up here, and never saw Jim Crow in action. But this film helps me understand the context and how it could have persisted for so long, even up into our times.

Perhaps the quick e-mail I sent out gave the wrong impression. I'm not running the film to celebrate racism or to somehow oppose what Dr. King stood for.

I should have included a link to a little more context that has already been on my blog. Here it is:

My error for not doing this in the first place. Hope you'll reconsider, even to the point of joining us on Wednesday to see the film for what it is: a masterpiece flawed by racism, as I point out on the Web site, and which I will explain to people at the screening.

By itself, the film is just a piece of celluloid. But it's up to us to give it meaning and learn what we can from it. It can teach us a lot, as Roger Ebert has pointed out:

Happy to talk more about this, though tone down the "inner racist" rhetoric. Glad you have strong feelings, but benefit of the doubt, please. :)

And that was that, I thought. You can't please everyone. Some people must imagine they're celebrating Martin Luther King Jr. Day by calling out "inner racists" such as me who need to be exposed. Well, that'll teach me!

But on the day of show, I realized this note would provide a vivid way to show the audience how 'The Birth of a Nation' still creates controversy almost a century after its release.

Also, I felt this was yet another example of someone hiding behind the anonymity of e-mail and the Internet to lob bullshit that serves no constructive purpose.

Time to do a little calling out of my own, I thought.

So here's a follow-up note:

Just a quick follow-up from Jeff Rapsis. I wanted you to know I plan to use your thoughts from yesterday in introducing 'The Birth of a Nation' tomorrow night at Merrimack College. I think reading your note will help people understand how this film can still engender strong feelings even today, nearly a century after its release.

Thanks again for sharing how you felt, although I do think you jumped to some pretty severe and inaccurate conclusions. But that's my fault for not explaining in the newsletter why 'The Birth of a Nation' was chosen and how it's appropriate for MLK Day.

Even so, you may not agree, which is fine.

But I certainly dispute your assertion that I'm some kind of closet racist. We can discuss that in detail any time you'd like to meet for coffee or whatever. I don't keep records of who gives me their e-mail address for silent film news, so I don't know who you are. Therefore, next move on that is up to you.

That night at the theater, I did read the note out loud prior to 'Birth of a Nation.' People were open-mouthed in amazement! And it gave me a chance to invoke the spirit of Jack Benny by getting the end of the tirade, and then pausing just long enough before crying out an exasperated "Well!"

The next morning, I got this from my mystery correspondent:

I'd rather you not. It was a personal message to you.
This movie can perpetuate racism and is better left in the vault.

Too late! But I used the opportunity to further explain why I disagreed, and also how I felt about anonymous name-calling:

Sorry, too late! But it did help everyone appreciate the kind of bigotry that's associated with this picture, so thank you.

Anyway, I wasn't asking for permission. Because you choose to hide behind the anonymity of e-mail to call me racist and decry my "lack of humanity," I don't see why I shouldn't use your comments as I see fit. I'll be using them in a blog post later today, and elsewhere.

To me, they're a good example of the kind of fear that comes from when people don't take the time to understand. Ironically, that's one of the dynamics that fuels bigotry in the first place.

Yes, I should have provided a bit more context in my communication, and I'll try to improve.

But think twice before you hit the Send button when you're calling people racist. And if you do, have the courage to identify yourself and be willing to back up your assertions like any serious person. That might be a better way to honor Dr. King after all.

To date, I haven't received a response. If I do, I'll let you know. I certainly do hope to continue the conversation, as it might actually bring about the apology that I think I deserve.

But maybe that's just my "lack of humanity" talking again.