Silent film accompaniment and boxing:
The importance of staying in shape 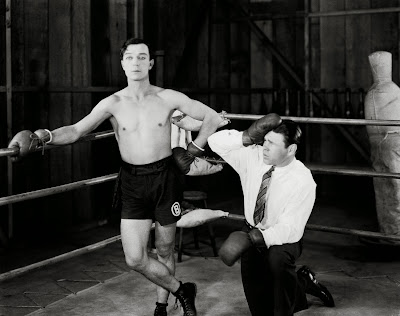 What does silent film accompaniment have to do with boxing? Quite a lot, at least the way I approach it.

Not that doing movie scores is some kind of battle or struggle for victory. What I'm thinking about it is the preparation and rituals that go into a successful "main event."

Consider: this past weekend saw a pair of really satisfying silent film screenings.

On Saturday, Jan. 25, Buster Keaton brought down the house (consisting of about 70 people) in Schagticoke, N.Y. with his adventures in the classic comedy 'Steamboat Bill, Jr.' (1928).

For both shows, the live score came together naturally, and I felt strong and confident throughout the screenings. Everything happened quite fluently.

Even though I improvise, a lot of this was due to preparation that took place before curtain time.

For 'Steamboat Bill,' I drew from material I've been developing for several years over the course of repeated screenings. The score reflected this accumulated effort, I thought.

For 'Tess,' I came up some fresh material, including a hummable innocuous-sounding tune that first appears as a carefree jig, but later grows to play a prominent role in the story's dramatic high points.

In both cases, the result seemed to work well in bringing the film to life. I felt I was "in synch" with each picture and created music that helped it connect with the audience.

And this was good news, because earlier this month I felt otherwise. What happened was I had just returned from a month away from the keyboard (traveling in southern India), and the first few screenings were rough going.

So I guess I'm getting back in the swing of things after a month break.

And just in time, too. Two important gigs are looming: the Kansas Silent Film Festival in Topeka, Kansas at the end of February, and then Cinefest, the vintage film confab held every March in Syracuse, N.Y. For these events, I need to be in shape.

And that got me thinking of how accompanying silent films is a lot like being a boxer in training. You really need to be in the gym (or at the keyboard) pretty regularly to be in the right kind of shape when the main event comes around.

You can't just walk into the arena (or the cinema) and expect to do very well without putting in the time and effort to be prepared, both mentally and physically.

In boxing, that means roadwork and gym time and sparring. In silent film accompaniment, that means taking any opportunity to play before a live audience and immerse yourself in the craft.

(I've actually done some boxing—not competitively, but enough to know what it's like. Hence this line of thought.)

So since coming back from India, I've returned to training for the main events coming up in Kansas and then New York. Thinking of it this way helps keep me focused and compels me to challenge myself to push further.

And another thing about boxing is that once the bell rings, you have no choice but to stay in the moment: to be present in what's actually happening right in front of you, be ready for anything, and go wherever it takes you. Otherwise you risk suffering the consequences, which start at getting punched in the face and go up from there.

That's true in silent film, too. Once the film starts, the accompanist has to stay with it, maintaining concentration no matter what twists and turns the story takes. And if you do a really bad job, I suppose you do risk getting punched in the face, although that hasn't happened to me yet. 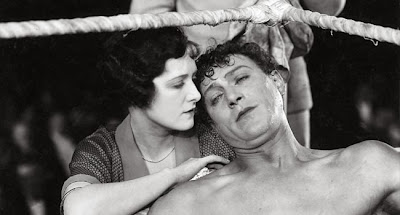 There are other similarities. For one thing, at the end of a film, I sometimes feel just like Carl Brisson looks (above) in this still for Alfred Hitchcock's silent drama 'The Ring' (1927). But more often, I feel exhilarated and really alive, which reminds me of what it felt to actually do some sparring at Murphy's Boxing Gym in Manchester, N.H.

And just as boxers find that their sport can be so absorbing that it makes the rest of the world drop away, I find that the same thing happens with creating live music for silent films. After the opening titles, I find myself entering a mental state that some psychologists call "flow," but which I think of as intense concentration.

If it's going right, my critical faculties somehow partner with my creative subconscious, and I find it's possible to follow a film (even if I've never seen it) and improvise original music that fits the scene. At its best, the score can flow quite effortlessly. But it's all a result of complete absorption in the task at hand.

And that doesn't happen if I'm thinking about what's for lunch or about doing my income taxes. I have to be in the moment.

And I find the more I do it, the easier and more natural it becomes. Again, it's just like in boxing, where you repeat drills so all the complex body motions that go into throwing an effective uppercut come naturally, without having to think about them.

And that frees you up for strategy, right there in the ring. What are my opponent's weak spots? Is he leaving himself open? Will he tire before me? Should I work the body or go for the head?

In silent film accompaniment, I find that when the music is coming naturally, I can do a better job strategizing about how to make the overall picture work. Where's the high point of this scene? How does it relate to the climax of the picture? What do I need to hold back in reserve?

And then there's pacing and stamina. In the ring, a big part of success is being able to go the distance. It's not about landing a big punch, especially in amateur boxing. It's about staying focused and using technique and form to pile up points round by round. If you come on too strong, you'll tire early, and that's when you get your clock cleaned.

In silent film accompaniment, you need to pace yourself. You don't want to get too intense too soon, lest you leave yourself with no place to go when the film really does need a big gesture. And you need to be able to stay there, in real time with the film, for sometimes as long as three hours without a break.

And here's an interesting thought: music and fighting are actually combined in Muay Thai boxing as practiced in Thailand. There, the action inside the ring is usually accompanied by musicians who play a form of folk music that speeds up as the end of each round nears. This provides a cue to the fighters that time is running out, and also makes it more exciting to the boisterous fans. 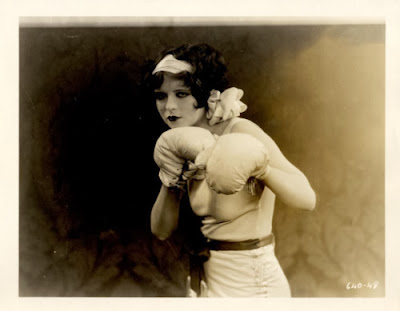 And how about the notion of catharsis? Boxing allows participants a chance to transcend so-called "civilized" society. Instead, it gives us permission to engage in or witness something brutally physical, within certain limits, that is otherwise forbidden.

You know, I find I like thinking of silent film in terms of boxing, and not just because it makes accompaniment seem just a little more macho than it really is.

But still, you won't find me swilling raw eggs for breakfast a la Sylvester Stallone in 'Rocky.' Among other reasons, my preferred breakfast food is Captain Crunch.