On India's 'Bollywood' blockbusters:
A modern form of silent cinema? 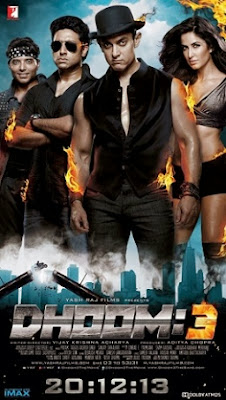 Today's Bollywood: Louder than ever, but a cousin to silent cinema.

I've just returned from a trip to southern India, and one of the highlights was seeing the latest Bollywood blockbuster where it's meant to be seen: on the big screen in a movie theater filled with fans.

I know what you're thinking: Bollywood? What's that got to do with silent film?

Turns out quite a lot, actually.

And yes, I didn't "get" Bollywood myself until an earlier visit to India in 2006, when I first saw a Bollywood film in its native environment: in this case, the Raj Mandir, a vintage movie palace about the size of Radio City Music Hall in the western city of Jaipur. 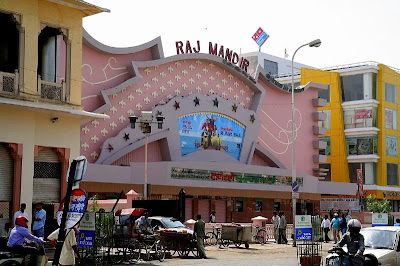 The exterior of the Raj Mandir in Jaipur.

The theater was memorable because it looked like a cross between a Las Vegas casino and the Emerald City from 'The Wizard of Oz.' But film, whose title I can't recall, was entirely forgettable: some light-as-a-feather romantic escapade that ran for more than three hours, including an intermission.

But the experience was unforgettable: a noisy crowd totally into the film, responding and reacting to it with wild abandon, calling friends on cell phones to provide updates on the latest plot twists or dance numbers. Families were sharing entire picnic meals, arguing over who would get the last drumstick.

And just as many have journeyed to India for discovery, I had to go there to "get" Bollywood. And the secret was this: Bollywood offered escape. It was the same kind of escape that Hollywood once offered, via Fred Astaire and Ginger Rogers, during the depths of the Great Depression. And not to be too hard on India, which remains a developing nation, but if most citizens need anything from its cinema, it's escape. 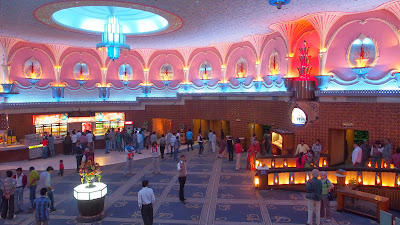 The over-the-top lobby of the Raj Mandir: escape even in the architecture!

And Bollywood gives it to them: films filled with action, adventure, comedy, romance, improbable fantasy dance numbers, and more, with absurd plots acted out by beautiful people living lives beyond the means of most Bollywood fans. It's the ultimate wish-fulfillment.

Also, Bollywood movies focus on the BIG emotions: Love with a capital L, and Hate, and Revenge, and Joy, and so on. Nothing subtle here. It's a cousin to opera, which is all about the experience of outsized emotions—as is a lot of the best silent film, too.

This time, we were in Bangalore, where there's no equivalent to the "Raj Mandir" movie palace. So a group of friends and I went to the Forum mall, a brand new shopping center that's topped by an 11-screen multiplex on the upper levels.

The Forum Mall in Bangalore: not quite the Raj Mandir, but still a wild sight.

Not knowing what to see, we asked staffers at the hotel and also people in the mall what the big must-see movie was. The answer came back almost unanimously: we had to see 'Dhoom 3,' a mega-blockbuster that had hit theaters just two weeks before.

Not in favor, surprisingly, was our Indian tour guide, Shasha, who called 'Dhoom 3' a "crap movie" and shook his head in disbelief that we'd even consider attending. But he went along with us just the same.

After confirming with the bemused box office clerk that 'Dhoom 3' was the picture to see, we got our assigned-seating tickets (that's the way they do it India) for 200 rupees each, or about $3.30. Quite a bargain! We then went through security, where a theater staffer warned us that the film was in Hindi, not English.

"That's fine," I said. "This is an experiment in the international language of cinema."

"Well, then carry on," he replied. 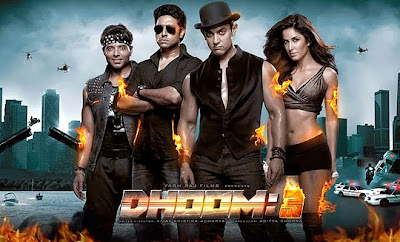 Another poster for 'Dhoom 3': in Hindi, the word 'Dhoom' means a combination of uproar, noise, and smoke.

And yes, one of the attractions of attending a Bollywood film is that it's not in English. The stories are usually so simple and transparent that you don't need to really understand the dialogue. In fact, somehow keeping all the words abstract allows you fill it in with your own version, which can make things more intense than if you knew the language. And there we are: the power of silent cinema all over again, even when a film does have dialogue.

Weirdly, even though the people in our group bought tickets at different times, all our seats wound up being together, way back in the very last row of the theater. This has happened each time I've seen a Bollywood film in India, so it's definitely a practice to seat foreigners up and out of the way, and I never pondered why until I asked an Indian woman seated next to me on the plane home.

"Oh, they do that for your own protection," she said, which I found hilarious until I remembered that the key villain in 'Dhoom 3' was, yes, a rich American banker who destroys the dreams of innocent Indians, setting the whole revenge plot in motion. Alas, we are the new Nazis.

No such bad vibes were given off, however, as we took our seats in the brand new theater, which looked a lot like a high-end cinema back home: steeply raked seating, plush reclining seats, overall very comfortable. Early arrivees for the 6 p.m. screening of 'Dhoom 3' were treated to a rotating series of ads, some local and some national, and all over the map in terms of quality.

It was a Tuesday night, so the theater was only about half-full when the lights went down, even though 'Dhoom 3' was sweeping the nation and was already the highest-grossing Bollywood epic ever. Surprisingly, the pre-show announcements included a request for patrons to turn off their mobile phones during the show, which seemed to me to go against the whole culture of how movies are seen in India. But there's apparently a solid financial reason to stop phone use: nowaways, phones can be used to tape a new hit movie and are apparently the source of many pirated editions of popular films.

It was also apparent that this theater was not one of those in India that still employ carbon arc projection. (And 'Dhoom 3' seems to have been conceived, shot, and issued purely in digital format, judging by the credits.) Well, so much for old school film technology, which I was kinda hoping to experience. But the image (and sound) could not have been more vivid, I thought.

After some over-the-top coming attractions, 'Dhoom 3' began, and I immediately knew we were in trouble with the opening title, which stated "CHICAGO 1990." Bollywood films can be hilarious enough, but when they're set in the U.S., the unintended comedy quotient can go over the top. An earlier film set in the U.S., 'My Name is Khan' (2010), was probably the funniest film I've seen in a theater since 'Borat' (2006).

'Dhoom 3,' which is indeed set almost entirely in Chicago, did a surprisingly good job of avoiding unintentional hilarity. Some things stuck out, though: Chicago 1990 (seen frequently in flashbacks) looks more like London 1888. The film asks us to believe that the monumental building on Lake Michigan is home to the "Great Indian Circus" rather than the Shedd Aquarium at the Field Museum of Natural History, and that it just stays abandoned for more than two decades. One helping of suspension of disbelief, please! 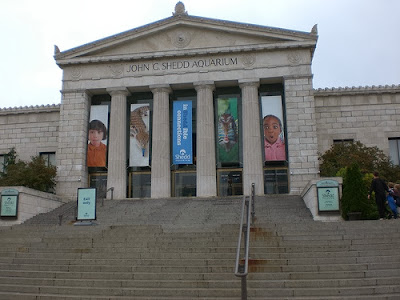 The Shedd Aquarium fills in as the long-time home of 'The Great Indian Circus' in 'Dhoom 3.'

And yes, many of the walk-on parts of Americans come across as absurdly phoney: an amusement park security guard announces that it's closing time in the most cheerful manner possible. And a final motorcycle chase through downtown Chicago ends suddenly outside of town at...Hoover Dam! Or at least I thought it was Hoover Dam until a quick Web search found it to actually be a dam in Switzerland, where a lot of Bollywood filming takes place because the scenery is so idyllic. (Indeed, what was supposed to the "Chicago Train Station" had rolling stock of the Schweizer Bundesbahn, or the Swiss Federal Railways, on its tracks.)

And we're supposed to believe that the gorgeous blond American cop assigned to help two crimefighters from Mumbai just happens to speak a little Hindi! A second helping, please!

Well, on the other hand, the American setting meant big chunks were actually in English (with Hindi subtitles), making 'Dhoom 3' just a little bit easier to follow. And having the action take place in Chicago did lend the whole thing a special interest that might have been missing if it had been set in insert-nameless-Indian-megalopolis-here.

But 'Dhoom 3' delivered in spades in what you expect from a Bollywood film: action, adventure, romance, comedy—it was clearly in the tradition of "something for everyone," just like the circus that was at the center of the film's plot. A production still from 'Dhoom 3' taken during one of the kinetic high-speed motorcycle chases through downtown Chicago, complete with fake "Chicago Police" squad car.

Of special note was the soundtrack, which was produced using the new Dolby Atmos system and which was completely overpowering. Yes, it was clearly too loud in some (well many) action sequences and climaxes, but throughout it had a robust bloom to it which was just exciting to behold. It reminded me of how Berlioz used to just revel in the experience of sound: it was such a pleasure to be in the presence of something done so well.

And the reaction? My colleagues, all Bollywood newbies except for our tour guide, were unanimous: 'Dhoom 3' was AWESOME! At intermission and then at the end, we were all drained and giddy by what was a truly cathartic time in the cinema. For days afterwards, everyone was saying it was the surprise highlight of their trip to India, which otherwise was heavy on temples and historic and cultural sites.

Maybe all that make a bit of pop culture stand out all the more. But to me, it served as a powerful reminder of how important it is to experience cinema in a theater with an audience. Silent or not, it's completely different from watching a film on TV by yourself, or on YouTube, or on your cell phone, God help you.

It's almost like some kind of critical mass is necessary for big (and shared) emotions to happen. A theater full of strangers, all responding to something amazing, and by that response, opening up each other to respond more intensely, until we're all part of a collective catharsis.

When it happens, there's nothing like it. And Bollywood films seem to me to have a high batting average. So if you get a chance to see a Bollywood film in its native environment—in a theater with an audience—by all means go.

And now we return to our regularly scheduled blogging about silent film...