'The Winning of Barbara Worth' launches
annual silent film series in Brandon, Vt. 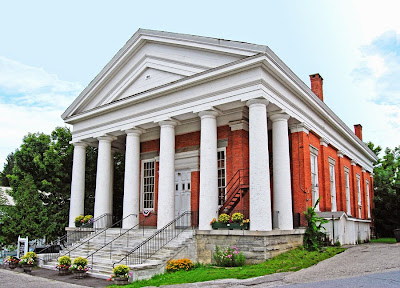 Brandon Town Hall and Community Center in Brandon, Vt., which moonlights as a silent movie theater for six months of the year.

This Saturday marks the start of the annual silent film series in the very nice town of Brandon, Vt., about three hours north of here. (It's 2½ hours if I drive like a maniac, which I sometimes do.)

The festival runs from May through October, or only those months where there's a reasonable expectation of warm weather, because the town hall does not currently have central heating. (They're working on that as part of ongoing renovations.)

And it's a favorite venue because the size is right (about 100 people fills the place), acoustics are great, and the people are fabulous. The organizers are faultlessly friendly and good-natured. And the people who attend are really into it. I don't know exactly why, but silent film is big in Brandon.

So it's a real pleasure to return there once again for another season of silents. The schedule is heavy on the comedy this time around (by popular request) but we're opening this weekend with a drama that I think will go over well with the Brandon crowd.

The film is 'The Winning of Barbara Worth' (1926), directed by Henry King. 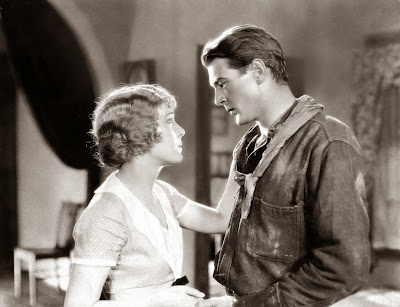 Vilma Banky and a young Gary Cooper star in 'The Winning of Barbara Worth' (1926).

Why in Brandon? For one thing, it has names that people might still recognize, including Ronald Colman and Gary Cooper, which is always a plus. Great story, great atmosphere, great location shooting, and quite the climax. (The only misfire, I think, is the title, which doesn't quite fit the film, I think.)

But I also selected the film because it's just packed with horses. And that's in honor of Betty Moffett, a long-time Brandon resident and enthusiastic supporter of the silent film series when we first got started a few years ago.

Betty would often say that one of the glories of films from the silent era is that they're full of scenes of great horsemanship, which was much more common back then. And it really gladdened her heart to see such images, and kept her coming back.

She made a playful promise to me that she'd continue to support the series as long as we ran films with a lot of horses. Betty, alas, has since passed away. But I'm keeping my promise regardless, and so we'll have plenty of horses this Saturday night and in the months to come.

Hope to see you there! The press release with more info (and the full season schedule) is below. 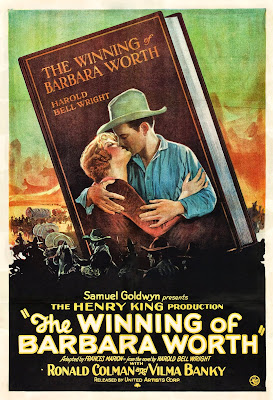 Rip-roaring epic silent Western to be shown in Brandon, Vt. on Saturday, May 17

'The Winning of Barbara Worth' (1926), ground-breaking outdoor drama, to be screened with live music

'The Winning of Barbara Worth' (1926), a silent drama starring Gary Cooper, Ronald Colman, and Vilma Banky, will be shown on Saturday, May 17 at 7 p.m. at Brandon Town Hall and Community Center on Route 7, downtown Brandon, Vt.

Live music for the movie will be provided by silent film accompanist Jeff Rapsis. Admission is free; donations are encouraged, with proceeds to support ongoing renovation of Brandon Town Hall.

'The Winning of Barbara Worth' opens another season of silent films presented with live music at the Brandon Town Hall. The series provides local audiences the opportunity to experience silent film as it was intended to be shown: on the big screen, in good-looking prints, with live music, and with an audience.

The screening of 'The Winning of Barbara Worth' is being sponsored by local residents Nancy and Gary Meffe.

Other shows in this year's series include:

• Saturday, June 14, 7 p.m.: "Silent Comedy with Harold Lloyd" See why Harold Lloyd was the most popular performer of the silent film era. Instead of getting ahead, his everyman character (a nice young fellow with horn-rimmed glasses) had a knack for getting into spectacular trouble, often requiring him to overcome amazing odds to win the day. Audiences continue to thrill at Harold's adventures when presented they way they were intended to be shown: on the big screen and with an audience. Screening sponsored by Pam and Steve Douglass.

• Saturday, July 12, 7 p.m.: "Silent Comedy with Buster Keaton" He never smiled on camera, earning him the nickname of "the Great Stone Face." But Buster Keaton's comedies rocked Hollywood's silent era with laughter throughout the 1920s. Acclaimed for their originality and clever visual gags, Keaton's movies remain popular crowd-pleasers today. See for yourself with a selection of Keaton's best short and feature-length films! Screening sponsored by the Brandon Artist Guild, Dolores Furnari, and Country Owl Studio.

• Saturday, Aug. 16, 7 p.m.: "Show People" (1928), starring William Haines, Marion Davies. A silent film about the silent film business! Young Peggy Pepper ventures to Hollywood to make her mark in drama, but finds an unexpected (and unwelcome) flair for slapstick comedy. King Vidor directed this entertaining valentine to an art form that would soon be swept aside by talking pictures. Full of cameos of stars ranging from Charlie Chaplin to Douglas Fairbanks Sr. Sponsored by the Brandon Town Players and Bill & Kathy Mathis In Memory of Maxine Thurston.

• Saturday, Sept. 13, 7 p.m.: "Silent Comedy with Harry Langdon" Silent comedy featuring the unique style of Harry Langdon, whose innocent baby-faced character rocketed to fame late in the silent era on the strength of films directed by a very young Frank Capra. Rediscover Harry's quiet genius the way it was intended to be seen: on the big screen and with a live audience. Screening sponsored by the Brandon Artist Guild, Charles Powell and Steve Zorn.

• Saturday, Oct. 18, 7 p.m.: "Chiller Theater Silent Double Feature starring Lon Chaney" The annual "Chiller Theater" presentation in the as-yet-unheated Brandon Town Hall. Just in time for Halloween, two classic silent films that will creep you out. In 'The Unknown' (1927), Lon Chaney plays 'Alonzo the Armless,' a disabled circus performer smitten with Joan Crawford. What he does to prove his love for her makes for an unforgettably twisted tale from director Tod Browning. Plus: Another Lon Chaney feature TBA. Screening sponsored by Lake Sunapee Bank.

'The Winning of Barbara Worth' (1926) will lead off this season's silent film series on Saturday, May 17 at 7 p.m. at Brandon Town Hall and Community Center, Route 7, in Brandon, Vt. Admission is free; donations are encouraged, with proceeds to support ongoing renovation of the town hall. For more information, visit www.brandontownhall.org. For more info on the music, visit www.jeffrapsis.com.