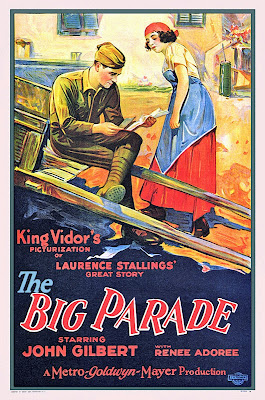 With Memorial Day approaching, I got to thinking: This summer marks the 100th anniversary of the start of the conflict that became World War I.

It's certainly not an occasion to be celebrated. But neither is it something that should pass without acknowledgement.

So what to do? Well, hoping to do my part for "acknowledgement," this summer seemed like a good time to highlight silent films that somehow have to do with World War I.

There's no shortage, as it was the defining global conflict for the entire silent era.

But for Memorial Day, I thought it would be particularly apt to screen the great MGM release 'The Big Parade' (1925). Set in the time of World War I, it turned into one of the great blockbusters of the era. (And it was World War I, by the way, that gave Hollywood the term 'blockbuster.'

We're screening it on Sunday, May 25 at 4:30 p.m. at the Wilton Town Hall Theatre in Wilton, N.H. It's one of the great silent film experiences and really one of the great movies of any era, and I encourage you to take it in as it was intended: on a big screen, in a restored print, with live music, and with an audience.

Just one warning: Bring the Kleenex!

If you'd like more info, check out the press release below. Hope to see you at the theater! 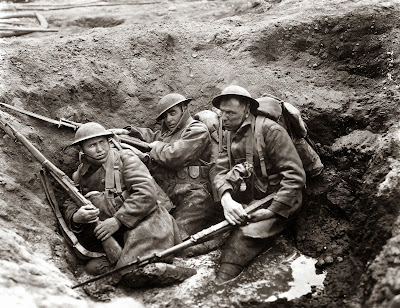 WILTON, N.H. — It was the 'Saving Private Ryan' of its time—a movie that took audiences deep into the heart of battle as experienced by a soldier whose life is changed forever by the horrors of war.

It was 'The Big Parade' (1925), a sprawling World War I epic and a box office sensation that made MGM into a powerhouse Hollywood studio. A newly restored version of this classic film will be shown with live music on Memorial Day weekend at the Wilton Town Hall Theatre in Wilton, N.H.

'The Big Parade' will be screened at the Town Hall Theatre one time only on Sunday, May 25 at 4:30 p.m. Admission is free, with suggestion donation of $5 per person.

'The Big Parade,' a landmark war film, was chosen to salute all local servicemen and women on the occasion of Memorial Day, and also because the summer 2014 marks the 100th anniversary of the start of World War I.

Released just a few years after World War I ended in 1918, 'The Big Parade' was hailed by critics as the first Hollywood film to depict the harsh reality of combat and its impact on troops in the trenches and foxholes. Its hellish battle scenes were staged on a massive scale and still retain their ability to shock audiences. 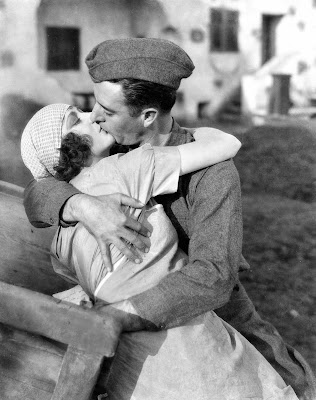 John Gilbert and co-star Renée Adorée get to know each other a little better in a scene from 'The Big Parade.'

In addition to vivid trench warfare scenes, the film contains a famous dramatic sequence in which the French woman (Renée Adorée) realizes her love for the soldier, and tries to find him to say goodbye as the massive convoy of troops pulls out for the front. Another celebrated sequence depicts the light-hearted first meeting of the soldier and the girl, in which he teaches her how to chew gum.

Music for 'The Big Parade' will be provided by local composer Jeff Rapsis, who is preparing original material for the screening.

"Live music adds an element of energy to a silent film screening that's really something special," Rapsis said. " 'The Big Parade' clocks in at well over two hours, but it's filled with great scenes that lend themselves well to music. It's a real privilege to create a score to help this great picture come back to life," said Rapsis, who made his West Coast performing debut this month at the Niles Essanay Silent Film Museum in Fremont, Calif.

Movies in the Town Hall Theatre's silent film series were popular when first seen by audiences in the 1920s, but are rarely screened today in a way that allows them to be seen at their best. They were not made to be shown on television; to revive them, organizers aim to show the films at the Town Hall Theatre as they were intended—in top quality restored prints, on a large screen, with live music, and before a live audience.

‘The Big Parade’ will be shown on Sunday, May 25 at 4:30 p.m. at the Wilton Town Hall Theatre, 40 Main St., Wilton, N.H.. Admission is free, with a donation of $5 per person suggested to help defray expenses. For more info, call (603) 654-3456 or visit www.wiltontownhalltheatre.com. For more info on the music, visit www.jeffrapsis.com.