Preparing for the three A's of August:
Action, Adventure, and Animals!

Okay, I'm back after visiting Switzerland for my wife's family reunion.

Although the weather was rainy most days, I did get a chance to use those hiking boots seen in an earlier post.

Where did I get to? Check this out:

Click on it to view it full size in your browser. It's a panorama made up of 14 separate shots taken on the shore of Lake Macun, way up in the Alps above the Lower Engadine Valley in southeast Switzerland. I took them while standing in one place and slowly turning around full circle.

For a sense of scale, check out the people visible about two-fifths of the way from the left. Many thanks to Andrew Mason at HippoPress for stitching these images together!

And below is a view from later, looking back, when I had climbed to the top of the ridge visible at the far left of the panorama. 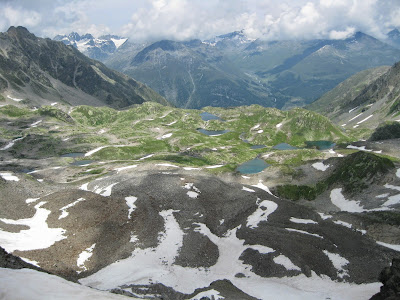 But what does this have to do with silent film accompaniment? Not really anything, other than the fact that I was hiking solo, so there wasn't much dialogue.

Actually, the whole trip helped to clear my head about music. So I feel like I can start fresh in August, which has some very interesting films coming up. If I had to sum up the offerings, I'd say Action, Adventure, and Animals. More details to follow, but the schedule is posted at right under "Upcoming Silent Film Screenings."

While traveling, I didn't totally ignore music. In addition to enjoying the sounds of Swiss cowbells everywhere we went, I was reading through Volume One of a remarkable work: a two-volume biography of French composer Hector Berlioz.

Written by English scholar David Cairns (hey, maybe there is a hiking relationship!) and published about 10 years ago, it's an extraordinary account of colorful life of one of the great figures of music.

I just finished Volume One last night, and am already plowing into Volume Two. But I can already tell this biography is going to be one of my "go-to" books: ones that I return to again and again over the years to reread in part or perhaps whole.

For one thing, the book is full of vivid detail. It also lays out the cultural milieu in which Berlioz had to function, and makes it clear (for the first time, for me) just how much of a revolutionary he was.

But most importantly, Cairns is able to mine letters and other sources to construct a portrait of an absolutely amazing personality. And the way he lived his life, and what he stood for, has so much to say to me today, I find it almost unbelievable.

Plus, the life of Berlioz is such a great story and is so dramatic that it would make a great piece of theatre. I'm already imagining a play with music in which Berlioz discusses his life and we get to hear some of the music that came out of it. It could possibly be something that symphony orchestras could do in live performance as a way of reaching new audiences, the same way some of them are starting to do silent film screenings.

I don't know when I'll find time to work on that. For now, I'm just excited at going back to familiar works such as the Symphonie Fantastique and hearing them with so much more knowledge about the circumstances of their creation.

It can be argued that music, or the work of any artist, should stand on its own, with no requirement that the composer's life or personality have any bearing on it.

But I find with Berlioz, knowing what he went through and what he was up against has made me more interested in the music than ever before.

Thanks, David Cairns! I plan to do some more above-treeline hiking this month, and I'll think of you when I see any cairns.