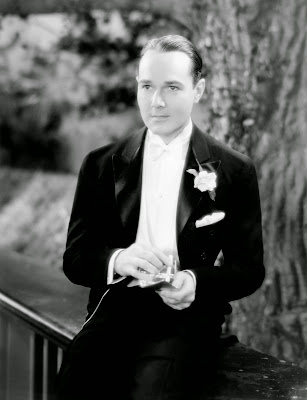 Actor William Haines at the height of his popularity.

These are questions posed by the career of actor William Haines. Although his name has now faded into obscurity, Haines was one of Hollywood's most popular leading men in the years when silent film died and sound film took over.

His career abruptly tanked, but not because Haines couldn't make the transition to talkies. It tanked because he was gay.

Really! Haines remained box office gold for MGM into the early 1930s, but refused to hide his off-screen homosexuality. With MGM's wholesome image at stake, studio boss Louis B. Mayer finally issued an ultimatum: for publicity purposes, Haines must agree to a sham marriage to an MGM starlet, or his career was over.

Haines said no thank you, and Mayer made good on his threat. Haines was soon off the screen.

But Haines had the last laugh. His movie career over, he launched a fabulously successful interior design business (I know, you saw that one coming) which for decades catered to Hollywood's royalty. Later in life, he counted Ronald and Nancy Reagan among his favorite clients.

So here's the deal: On Saturday, Aug. 16 in Brandon, Vt., we're screening 'Show People' (1928), a great late MGM silent comedy in which Haines co-stars with Marion Davies. Like so much of Hollywood's output, it's built on a boy-meets-girl story, except in this case Haines was acting on more than one level. 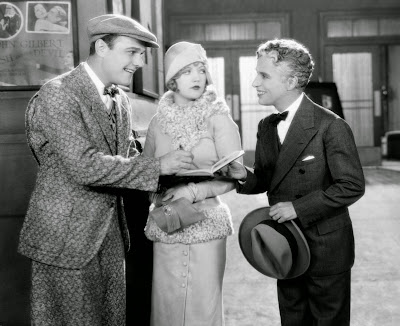 Directed by King Vidor, 'Show People' is a crackerjack picture about the movie business itself as it existed near the end of the silent era. With its light-hearted spirit of mockery, 'Show People' is a valentine to all the energy and excitement that everyone knew was about to change forever.

In promoting the film, is it right to bring attention to the story of Haines' homosexuality? Or should the film be allowed to stand or fall on its own terms, without that context? After all, audiences at the time would have had no idea. So why bring it up?

I used to think it was a mistake to mention the background, as I thought it would make for an unhelpful distraction. As an art form, silent film has enough obstacles to reaching audiences today. I feared that every time Haines appeared on-screen, all people would think is, "There goes Ronald Reagan's gay interior decorator!"

But I've come to realize that just as Haines was courageously open about his sexual orientation, his life story needn't be covered up. As you can tell from this post, I now feel it's actually a big part of why any of his pictures, silent or sound, are worth checking out today.

Not only was he an winning on-screen performer, but the man had the courage of his convictions at a time when there was immense pressure to conform to certain norms. That's a story worth telling, and so I do. Hence this post, and all the other publicity celebrating his career and life story.

So I hope you'll join me at Brandon Town Hall (on Route 7 in lovely Brandon, Vt.) for a screening of 'Show People' (1928) on Saturday, Aug. 16 at 7 p.m. Admission is free, with donations accepted to help with ongoing renovations to the facility.

More info about the film and the screening is posted in the press release below. 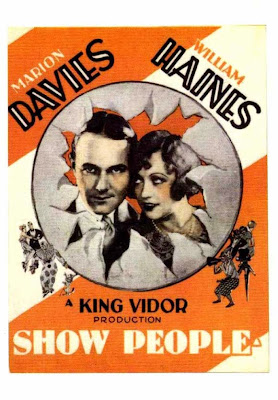 BRANDON, Vt.—He was the Tom Hanks his time: a leading man with a breezy charm who always got the girl.

But the film career of William Haines, one of early Hollywood's brightest stars, was cut short for an unfortunate reason: at a time when sexual preference was a taboo subject, Haines was openly gay.

See Haines at the peak of his popularity in 'Show People' (1928), an MGM comedy co-starring Marion Davies that spoofs the movie industry, pitting high drama against low comedy. Showtime for 'Show People is Saturday, Aug. 16, at 7 p.m. at the historic Brandon Town Hall and Community Center on Route 7 in downtown Brandon, Vt.

All are welcome to this family-friendly event; admission is free. The screening is the latest in the Brandon Town Hall's silent film series, and will feature live accompaniment by Jeff Rapsis, a New Hampshire-based composer who specializes in creating scores for silent films.

Any free will donations will go toward Town Hall restoration. The screening of "Show People' is sponsored by the Brandon Town Players and Bill & Kathy Mathis In Memory of Maxine Thurston.

William Haines was one of MGM's biggest stars in the late 1920s, often playing the male lead romantic comedies. But off-screen, Haines was gay—and, unusually for the era, did not hide his homosexuality.

Haines maintained his star status at MGM during the move to talking pictures. But a publicity crisis arose in 1933, when Haines was arrested in a YMCA with a sailor he had picked up in Los Angeles' Pershing Square.

'Show People,' directed by King Vidor, shows Haines at the height of his leading-man status. The light-hearted story follows Peggy Pepper (Marion Davies), a beauty queen from Georgia trying to break into the movies as a dramatic actress. Haines plays Billy Boone, lead actor of a slapstick comedy studio where Pepper gets her first break. 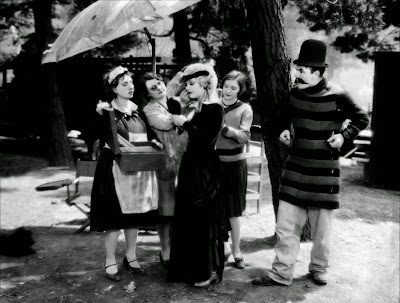 Characters from two very different movies collide in a scene from 'Show People' (1928).

Can the young actress yearning for drama survive the indignity of pies in the face? And when her big break finally comes, will it mean sacrificing her growing friendship with Billy?

And can Billy rescue the fun-loving Georgia girl from a studio that aims to invent a whole new persona for her as a serious actress, descended from European royalty?

Can low comedy win out over high drama? In answering that question, 'Show People' pokes fun at Hollywood phoniness and the culture of celebrity worship that had already emerged by the 1920s. 'Show People' also offers rare behind-the-scenes glimpses of movie-making at the very end of the silent period, when studios were rushing to prepare for sound.

"It's like they knew an era was ending, and 'Show People' is kind of a Valentine to the whole silent film experience," said Rapsis, who will accompany the screening. "It's a love letter to all the craziness that went into creating the movie business." 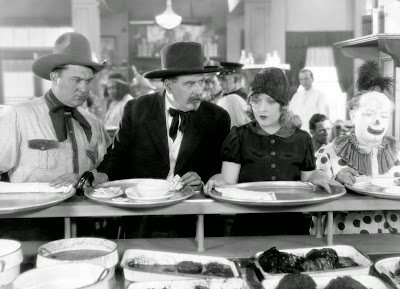 A scene in the MGM company cafeteria.

In 2003, 'Show People' was selected for preservation in the United States National Film Registry by the Library of Congress as being "culturally, historically, or aesthetically significant."

The program will also include short silent film comedies prior to the main feature.

The Brandon Town Hall's silent film series aims to recreate the full silent film experience, with restored prints projected on the big screen, live music, and with a live audience. All these elements are essential to seeing silent films they way they were intended, Rapsis said.

“These films are still exciting experiences if shown as they were designed to be screened,” Rapsis said. “There’s a reason people first fell in love with the movies, and we hope to recreate that experience. At their best, silent films were a communal experience very different from today’s movies—one in which the presence of a large audience intensifies everyone’s reactions.”

• Saturday, Sept. 13, 7 p.m.: "Silent Comedy with Harry Langdon" Silent comedy featuring the unique style of Harry Langdon, whose innocent baby-faced character rocketed to fame late in the silent era on the strength of films directed by a very young Frank Capra. Rediscover Harry's quiet genius the way it was intended to be seen: on the big screen and with a live audience. Screening sponsored by the Brandon Artist Guild, Charles Powell and Steve Zorn.

• Saturday, Oct. 18, 7 p.m.: "Chiller Theater Silent Double Feature starring Lon Chaney" The annual "Chiller Theater" presentation in the as-yet-unheated Brandon Town Hall. Just in time for Halloween, two classic silent films that will creep you out. In 'The Unknown' (1927), Lon Chaney plays 'Alonzo the Armless,' a disabled circus performer smitten with Joan Crawford. What he does to prove his love for her makes for an unforgettably twisted tale from director Tod Browning. Plus: Another Lon Chaney feature TBA. Screening sponsored by Lake Sunapee Bank.