'Four Horsemen of the Apocalypse': the link
between silent film and candlepin bowling 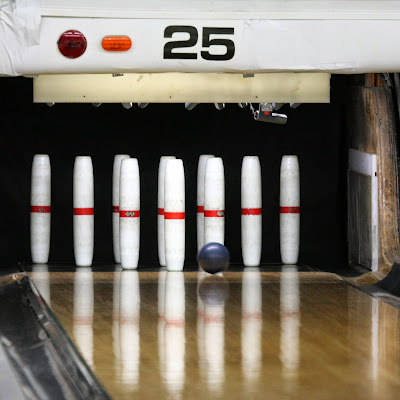 What could this possibly have to do with silent film? Read on.

With the ongoing demise of the legendary Market Basket supermarket chain, one of the few remaining distinctive things about life here in New England is candlepin bowling.

And therein lies another example of how silent film, though long dead, worked itself into popular culture in ways small and large that persist to this day.

Take candlepin bowling, which is a regional variation of bowling as practiced elsewhere in the U.S. 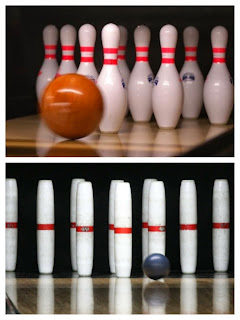 Where "normal" bowling (called "ten-pin bowling" in these parts) uses fat pins and big bowling balls, candlepin bowling uses skinny pins (yes, shaped like candles) and much smaller balls—about the size of a grapefruit. (The image at left shows the difference.)

As a kid, I spent way too much time watching candlepin bowling shows on local TV. (That's how popular the sport is around here.) If nothing else, shows like "Bay State Bowling" (hosted by Bob Fouracre) introduced me to the lingo of the sport, which included such exotic terms as a "Spread Eagle" (knocking out just the two middle pins) and a "Half Worcester," another kind of "leave."

And best of all was "the Four Horsemen," when the four front pins on either side are left standing alone in a row. Sample usage: "He's gotta pick off the Four Horsemen to spare this up."

And that was that—until this week, when I accompanied 'The Four Horsemen of the Apocalypse' (1921) at the Flying Monkey Moviehouse and Performance Center in Plymouth, N.H. 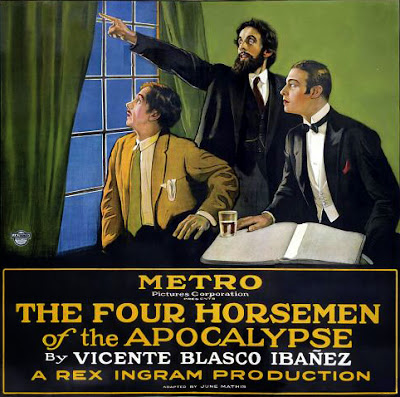 A promotional slide from the silent film version of 'The Four Horsemen of the Apocalypse.'

Yes, I know the concept of the "Four Horsemen" comes from scripture, which predates the movie biz. Long before there was a Hollywood, the Four Horsemen were known to readers of the Book of Revelation as harbingers of the coming Judgment Day.

But it was the film using that title—and Rudolph Valentino's appearance in it—that really popularized the term. Screenwriter June Mathis turned an obscure Spanish novel into a megahit that propelled Rudy to stardom, launched the tango craze, and became the sixth-highest grossing film of the silent era.

It is from such cultural phenomena that nicknames are formed. And so, although I have no proof, it seems pretty likely that the "Four Horsemen" of candlepin fame must have been spurred by the immense popularity of the 1921 movie. (I doubt it came directly from the New Testament. I don't want to stereotype, but candlepin bowlers in my experience are not exactly the Biblical type.)

So there it is: another example of how silent film is in the DNA of so much around us even now.

The problem is, candlepin bowling isn't really the best thing to be thinking about when you're trying to create music that brings to life a sprawling multi-generational drama about a family caught up in World War I. 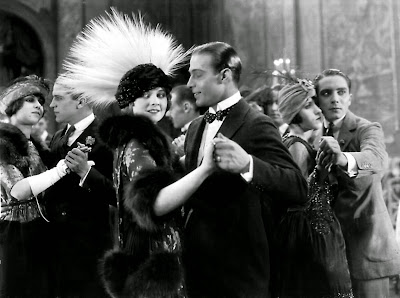 Sure, he could dance. But could he bowl?

For instance: there was Valentino, introducing the tango early in the film, and all I could think of was the theme music for "Candlepins for Cash."

But I was able to quickly get my mind out of the gutter (har!) and get into the spirit of the film, creating a line of faux-tango music with a rising bass line that served ably for Rudy's character for the rest of the film.

I had some ungainly music for the German side of the family (depicted as comical at first, before the sons later become menacing military men), and also a "love" theme that I came up with on the spot.

By coincidence, both featured the same two notes: the fifth and the flatted sixth of whatever key we were in—and so I was able to work them in together and transform them from one into another, sometimes at a moment's notice, depending on what was happening on screen. Nice! 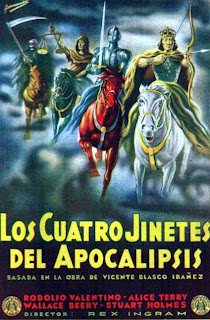 And the nightmarish images of the Four Horsemen themselves—so spectacular for this period of cinema—required a kind of mad galloping music, I thought. And so I recycled the same patterns of repeated notes I had come up with for the dramatic lunar landing sequence from Fritz Lang's 'Woman in the Moon' (1929) last Sunday night at the Harvard Film Archive.

As they say, something old, something new. And thus a live film score is created on the spot.

Our next silent film at the Flying Monkey will be Hitchcock's 'The Lodger' (1927) on Thursday, Sept. 11. I wonder if there's any way I can tie it to, say, cricket?