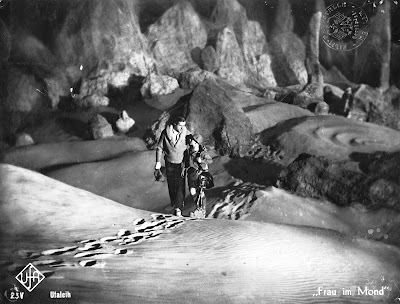 I know it sounds like a lame joke to say that a silent film might just leave you at a loss for words.

But that's how I feel about 'Woman in the Moon' (1929), the final silent film from German director Fritz Lang.

I think it's an astonishing sci-fi rocket ride. And I'm thrilled to be doing live music for a rare screening of it, in 35mm no less, on Sunday, Aug. 17 at the Harvard Film Archive.

There's a press release below with detailed info about the film and the screening. I encourage all to join: sci-fi geeks, silent cinema buffs, Lang groupies. There should even be room for a few mainstream folks.

But for now, here's 10 reasons you should see 'Woman on the Moon' as it was intended: on the big screen, with live music, and with an audience. 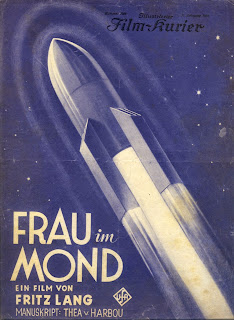 1. Hitler didn't want you to see this film. Really! It depicted advanced German rocket technology in such detail, Hitler had the film suppressed when he came to power, as he had ideas other than space travel about how rocket technology might be used. (Like attacking London.)

2. It's structured and paced like an espionage thriller, so you won't be bored.

3. In the big launch sequence, Lang and his screenwriter/collaborator Thea von Harbou invented the idea of a backwards countdown, which later came into common use for actual space launches.

4. What it got right. In reaching the moon, it's astonishing how Lang and his collaborators anticipated so much of what later actually came to pass with Apollo: a tall spacecraft assembly building, multi-stage rockets, lunar landing capsules.

5. What it got wrong. Howlers include a strange notion of zero gravity, moon voyagers dressed like alpine mountaineers, and a conveniently breathable moon atmosphere.

7. Director Lang hated Hitler, so it's probably not a coincidence that the villain (a quick-change artist played by Fritz Rasp) bears more than a passing resemblance to Der Führer.

8. 'Woman in the Moon' has been totally overshadowed by its iconic predecessor 'Metropolis' (1927), also directed by Lang. Don't you feel the least bit sorry about that? Here's your chance to right that wrong.

10. This film will just generally blow your mind for its sheer audacity.

So we're counting down until blast-off time, which is Sunday, Aug. 17 at 7 p.m. Hope to see you at the launch pad—er, the Harvard Film Archive. 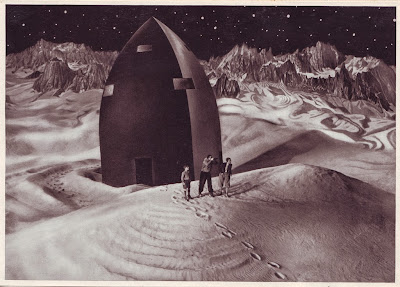 'Woman in the Moon,' pioneer drama about first moon voyage, to be screened with live music on Sunday, Aug. 17 at Harvard Film Archive

CAMBRIDGE, Mass.—A sci-fi adventure hailed as the first feature film to depict realistic space travel will be shown this weekend at the Harvard Film Archive.

The screening is part of a retrospective of Lang's work and career that continues through September at the Harvard Film Archive.

The film, made with German rocket experts as technical advisers, is noted for anticipating many of the techniques used by NASA for the Apollo moon launch program 40 years later. For example, a multi-stage rocket is employed to escape Earth's gravity, and a separate capsule is used to reach the lunar surface.

But 'Woman in the Moon,' with its melodramatic plot and colorful characters, also stands as the forerunner of many sci-fi story elements that quickly became clichés: the brilliant but misunderstood professor; a love triangle involving a beautiful female scientist and her two male crewmates; a plucky young boy who yearns to join the expedition; fistfights and gunfire and treachery on the lunar surface.

"This is a great and at-times bizarre film, one that must be seen to be believed," said Jeff Rapsis, a New Hampshire-based silent film accompanist who will create live music for the screening. "It's as entertaining as any spy-thriller. And as a past vision of a future that didn't quite come to be, it really gets you thinking of time and how we perceive it."

Rapsis, a resident of Bedford, N.H., will improvise live musical accompaniment during the screening, using both an acoustic piano and a digital synthesizer to recreate the sound of a full orchestra and other more exotic textures. 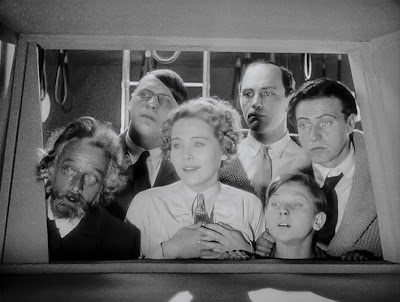 The cast admires a close-up view of the moon prior to landing.

Director Fritz Lang, who was responsible for the groundbreaking sci-fi epic 'Metropolis' (1927), planned 'Woman in the Moon' as another step in his quest to stretch cinema's visual, story-telling, and imaginative capabilities.

However, German rocket scientist Hermann Oberth worked as an adviser on the movie, and it developed cult status among the rocket scientists in Wernher von Braun's circle. During World War II, the first successfully launched V-2 rocket at the German rocket facility in Peenemünde had the "Woman in the Moon" logo painted on its base. 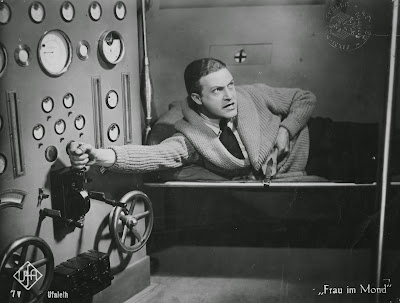 ‘Woman in the Moon’ will be shown in 35mm with live music on Sunday, Aug. 17 at 7 p.m. at the Harvard Film Archive, located in Carpenter Center for the Visual Arts, 24 Quincy St., Cambridge, Mass. Tickets are $9 per person/$7 students & seniors. For more information on the screening, visit http://hcl.harvard.edu/hfa/ or call 617-495-4700. For more information on the music, visit www.jeffrapsis.com.