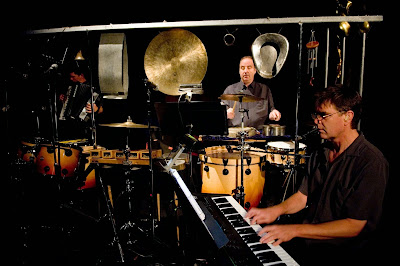 Alloy in action: that's Ken Winokur back behind the bedpan, playing percussion, with colleagues Terry Donahue on accordion and Roger Miller on keyboard.

Just prior to yesterday's screening of two silent W.C. Fields features, I was introduced to one of the big names in silent film music: Ken Winokur of the Alloy Orchestra!

The night before, Ken's group had done their new score for 'Son of the Sheik' (1926) at the Somerville Theatre, where I was doing my program the next afternoon.

I was thrilled to meet Ken, who with colleagues Terry Donahue and Roger Miller has been attracting big audiences to silent films for many years now.

(How big? I understand they had 600 people at the Somerville on Saturday night, way more than what we get for the Sunday afternoon shows. And at a higher ticket price, too!)

He was there to take in the Fields films, which he said he hadn't seen before. Turns out he lives not far from the Somerville, so I guess it was only a matter of time before our paths crossed.

Ken was a pleasure to talk to. We shared a few thoughts about synthesizers and how much gear Alloy has to move in and out of theaters. But that's about all we had time for before the lights went down.

And yes, knowing that a silent film music guy of Ken's stature is in the audience is enough to make me a little self-conscious when sitting down at the keyboard.

But I think of it as good experience in pushing myself into that "silent film accompaniment" zone, where the film takes over and I find I stop being nervous no matter who's in the room.

Luckily, that happened pretty quickly yesterday afternoon with 'Sally of the Sawdust.' And Ken sent me a note this morning with some nice comments about the music. Thanks, Ken!

This was before I was doing accompaniment. But at the time, it made a huge impression, and it helped steer me back into the field. (I had collected vintage film way back as a teenager, but had moved on to other interests after college. Besides the opposite sex, that is.)

Later, I went to a couple of programs Alloy did in Northhampton, Mass. One of my best memories from that time was taking a retired (and recently widowed) newspaper colleague in his 80s down there for a screening of Harold Lloyd's 'Speedy' (1928), which he remembered seeing as a boy. Alloy did a magnificent job, and it was a great night!

Over the years, Winokur's group has drawn criticism from some film buffs who don't favor Alloy's approach to scoring silents.

That's unfortunate, as I feel there's room for a lot of different approaches. And in many cases, new music is what brings many first-timers to a silent film screening.

In my case, I like to think Winokur and his colleagues helped "loosen my ears" regarding silent film music. They helped me understand the value of coming up with new (and not necessarily period authentic) music to help bring these timeless works of art alive for contemporary audiences.

Yes, there are some very talented musicians who specialize in recreating the musical cues played when the films were first released. And there's tremendous value in that, too.

But there's also a lot to be said for creating new music that connects with people and, again, helps bring other audiences into the silent film tent.

That's what Alloy has been doing for the past quarter century, and I hope they continue for a long time to come.

After all, the chance for each era to create new music for these movies is one of the great glories of the silent film art—one that will help keep interest strong, and these films before the public, as years and decades continue to pass, I think.

If you're interested in learning more about the Alloy Orchestra, check out their Web site. They tour all over the country, and even internationally, so at some point there should be a show near you.

Next up for me is a presentation to the New Hampshire Creative Club this Wednesday, and then a screening of 'Tarzan and the Golden Lion' (1927), one of the best surviving Tarzan silents, on Thursday, March 12 at the Flying Monkey Moviehouse and Performance Center in Plymouth, N.H. More on that in a separate post.

A Sunday afternoon screening of 'Grandma's Boy' (1922) follows at the Townsend (Mass.) Public Library, and then it's off to the last-ever Cinefest gathering in Syracuse, N.Y., where I'll be one of eight accompanists on hand for this four-day event.

Having that many accompanists in one place has gotta be some kind of a record. Perhaps we'll play musical chairs!