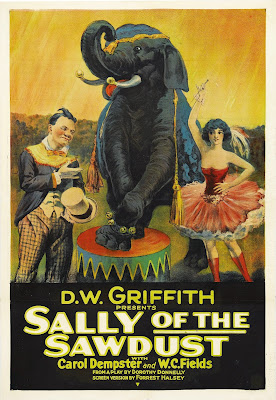 People are often surprised to learn that W.C. Fields was a popular movie star during the silent film era.

How could that be? Wasn't his voice, that unmistakeable nasal twang, an essential element of his appeal?

But he was popular in silent films. And you can see why by coming to a great double feature of two of his best surviving silents this weekend.

It's on Sunday, March 8 at 2 p.m. at the great Somerville Theatre in Davis Square, Somerville, Mass.

We're showing 'Sally of the Sawdust' (1925), a circus melodrama directed by D.W. Griffith, of all people, in which Fields plays a loveable con artist who adopts a young girl and raises her in the rough-and-tumble world of the big top.

It'll be followed by 'Running Wild' (1927), a classic family farce in which Fields plays a henpecked husband who undergoes a sudden transformation to alpha male.

Both films will be shown in 35mm, their original format, with prints courtesy the U.S. Library of Congress. 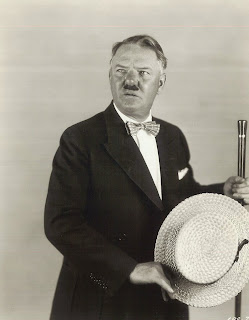 I'm told by the Somerville's projectionist extraordinaire David Kornfeld that the print of 'Running Wild' looks terrific. (That's Fields in 'Running Wild' at left.) He hasn't inspected 'Sally' in detail yet, but says at first glance it looks good.

Live music will be provided by yours truly.

'Sally' is pure Griffith hokum, but then no one did melodrama better. In the film, Fields is called upon to play a wide range of emotions, and it's interesting to see what he could do with this kind of a role.

But it's light stuff, with plenty of scenes where Fields gets to show off his silent film comedy and pantomime chops.

Also of interest in 'Sally' is that it gives us a chance to see Fields doing his juggling act while still in his prime.

Versions of this film that I've seen often seem to cut out some of the juggling footage, so I'm interested to see if the LOC print has more material. It's possible.

But it's 'Running Wild' that I'm really looking forward to, as it's a great audience picture.

In running this before, I've found it starts strong with an absolutely hilarious depiction of dysfunctional family life, and then only gets better as the plot unfolds.

After being snow-bound for the better part of six weeks, the Boston area needs a laugh. And I can think of no more surefire way to produce that than inviting you to take in 'Running Wild' at the Somerville Theatre this Sunday afternoon.

Hope to see you there! For more info, check out the text of the press release below: 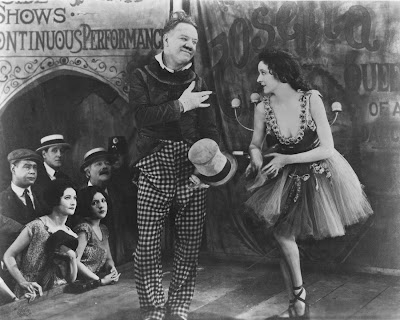 A mustachioed W.C. Fields and starlet Carol Dempster star in 'Sally of the Sawdust' (1925).

SOMERVILLE, Mass.—He was a performer who could be recognized by just the nasal twang of his voice.

But prior to reaching iconic fame in talking pictures, W.C. Fields starred successfully in a popular series of silent feature films for Paramount Pictures and other studios in the 1920s.

Rediscover the non-talking W.C. Fields in 'Sally of the Sawdust' (1925) and 'Running Wild' (1927), two of Fields' best silent pictures, in a double-bill screening on Sunday, March 8 at 2 p.m. at the Somerville Theatre, 55 Davis Square, Somerville, Mass.

Both films will be screened using 35mm prints from the U.S. Library of Congress. General admission to the double feature is $15 per person.

Live musical scoring for the movies will be provided by silent film accompanist Jeff Rapsis.

W.C. Fields remains famous today for his comic persona as a misanthropic and hard-drinking egotist with a snarling contempt for dogs, children and women.

Although Fields achieved lasting fame as a movie star in talking pictures of the 1930s, his long career encompassed decades on the vaudeville stage as well as a series of silent film roles.

"People find it hard to think of W.C. Fields in silent films, but he was actually quite successful," Rapsis said. "As a vaudeville performer and juggler, Fields cultivated a form of visual comedy and pantomime that transferred well to the silent screen. Also, as a middle-aged man during the silent film era, he was able to play a family father figure—the kind of role that wasn't open to younger comic stars such as Charlie Chaplin or Buster Keaton.

In all, Fields starred in 10 silent features in the mid-1920s. Several are lost; in those that survive, Fields sports a thick mustache, part of his vaudeville costume as a "vagabond juggler" which he dropped in later years.

The Fields double feature is the latest installment of the Somerville Theatre's monthly "Silents, Please!" series, designed to showcase the silent era's best feature films the way they were intended to be shown—using actual 35mm film prints projected on the big screen, with live music, and with an audience.

"If you can put all these elements together, the films come to life in a way that's surprising to modern audiences," said Ian Judge, the Somerville's general manager. "Our silent film series has been very successful at attracting an audience, we're thrilled to continue it on a monthly basis." 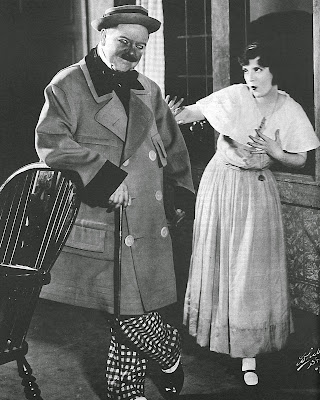 W.C. Fields and Carol Dempster in 'Sally of the Sawdust.'

In 'Sally of the Sawdust' (1925), Fields plays Professor Eustache McGargle, a good-natured circus juggler and con man who finds himself responsible for Sally (Carol Dempster), an orphaned girl whose mother has died.

Raised by McGargle, Sally grows up to become a popular performer. But when the show arrives in the town where her mother's relatives now live, Sally is forced to choose between the man who raised her and the wealthy family that wants to reclaim her as their own.

'Sally of the Sawdust,' based on the 1923 stage musical 'Poppy,' gives Fields ample opportunity to display his juggling talents, a staple of his vaudeville act. The film was directed by D.W. Griffith, a rare detour into light comedy from a filmmaker known for pioneering epic dramas such as 'The Birth of a Nation' (1915) and 'Orphans of the Storm' (1921).

In 'Running Wild' (1927), Fields plays Elmer Finch, a cowardly and henpecked husband disrespected by his stepson, his co-workers, and even the family dog.

But every dog has his day, and Finch's comes when he undergoes hypnosis, which transforms him into a swaggering take-no-prisoners alpha male.

The result is a timeless domestic farce that foreshadows Fields' later talking films and continues to delight audiences when screened as intended: in a theater, with live music and an audience.

Fields appears as an even younger man in 'Pool Sharks' (1915), a short comedy also on the program. The film marks the first appearance of Fields on screen, and will be included as a bonus extra in the Somerville's program.

Rapsis improvises the music in real time, while the film is running, using a synthesizer that allow him to recreate the "movie score" texture of a full orchestra.

"Improvising a score live is a bit of a high-wire act, but it allows me to follow and support the film a lot more effectively than if I was buried in sheet music," Rapsis said. "Instead, I'm free to follow the film right in the moment. Each time it's different, which lends a certain energy and immediacy and excitement to the experience."

Following the W.C. Fields program, the Somerville has scheduled the following silent films to be shown in 35mm in the venue's main theater. All will be screened with live music by Jeff Rapsis.

• Sunday, May 3, 2 p.m.: 'The Cameraman' (1928) starring Buster Keaton. In one of his best pictures, silent comedy legend Buster Keaton plays a would-be newsreel cameraman. A great romantic comedy and a remarkable "inside" look at the early movie biz as only Keaton could provide.

• Sunday, June 7, 2 p.m.: 'Play Safe' (1927) and 'Show People' (1928). A double feature of two comedies from the silent era's peak. 'Play Safe' includes one of most hair-raising train chase sequences ever filmed, while 'Show People' is director King Vidor's sly and self-referential Valentine to the era of silent movie-making.