'Four Horsemen of the Apocalypse' (1921)
on Wednesday, March 25 at Merrimack College 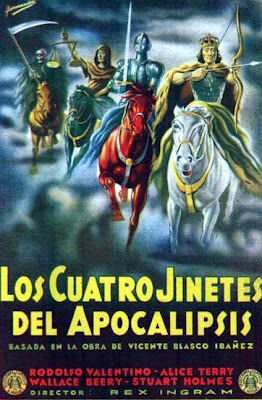 How many of the Four Horsemen can you name? Let's see—there's Pestilence, Death, War, and...Irving?

Answer: 'The Four Horsemen of the Apocalypse,' a sprawling multi-generational family drama set in the years leading up and then during World War I.

And we're screening it, tangos and all, on Wednesday, March 25 at 7 p.m. at the Rogers Center for the Performing Arts at Merrimack College in North Andover, Mass.

I've only done this film once, and it's quite a workout. Not only is it loooong (with some versions running somewhere between 2½ and 3 hours) but it's also full of big dramatic scenes, including Rudy's steamy 'tango' sequence with its legions of on-screen guitar players. 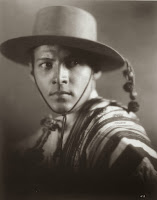 And then there's the war, which is a menacing presence during most of the film. Somehow the music has to evoke that without growing tiresome. We'll see how I do.

So overall, it's a big film, and a fitting conclusion to our 2014-15 schedule of silent films at the Rogers Center.

I like doing films there and audience attendance has been growing—typically we get 80 to 100 people at these screening, sometimes more.

So I hope to be back with some silent film programs for the 2015-16 season. Please let me know what films you'd like to see run at the Rogers Center.

And in the meantime, I hope you can make it to the Rogers Center for a rare screening of this important and dramatic film.

And I encourage anyone to come down and sit with me on the bench. After all, it takes two to tango!

Okay—if you'd like more info about the picture or the screening, the press release (below) covers all the bases. 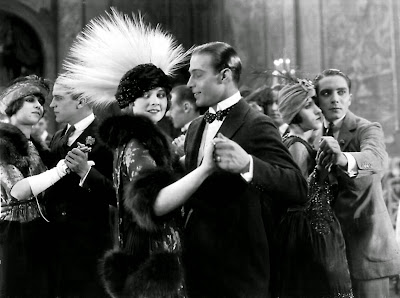 Rudolph Valentino shows off his dancing skills in 'Four Horsemen.'

NORTH ANDOVER, Mass.—A drama that helped launch the career of silent film heartthrob and megastar Rudolph Valentino will be shown in January at Merrimack College.

'The Four Horsemen of the Apocalypse' (1921), a multi-generational family drama that climaxes during World War I, will be screened with live music on Wednesday, March 25 at 7 p.m. at the Rogers Center for the Arts, Merrimack College, 315 North Turnpike St., North Andover, Mass.

'Four Horsemen' was originally scheduled to be shown in February at the Rogers Center, but the screening was moved to a March date due to a scheduling conflict.

Based on a novel by Spanish author Vicente Blasco Ibáñez, 'Four Horsemen of the Apocalypse' tells the story of an extended Argentine family with mixed ethnic background: one side is German, while the other is French.

The family get drawn into World War I in far-off Europe, with members ending up on opposing sides. With brothers pitted against one other on the battlefield, the destruction of war changes lives and fortunes forever. 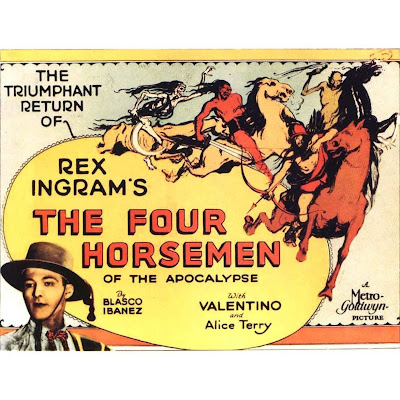 Also, the film turned then-little-known actor Rudolph Valentino into a superstar and associated him with the image of the Latin Lover. In addition, the film inspired a tango craze and such fashion fads as gaucho pants.

In 1995, 'The Four Horsemen of the Apocalypse' was selected for preservation in the United States National Film Registry by the Library of Congress as being "culturally, historically, or aesthetically significant."

"This is a big sprawling drama, and a great chance to see the legendary Rudolph Valentino in the picture that launched his celebrity," said Jeff Rapsis, a New Hampshire-based silent film accompanist who will create live music for the screening.

All movies in the Rogers Centers’ silent film series were popular when first released, but are rarely screened today in a way that allows them to be seen at their best.

They were not made to be shown on television; to revive them, organizers aim to show the films at the Rogers Center as they were intended—in top quality restored prints, on a large screen, with live music, and with an audience.

‘The Four Horsemen of the Apocalypse’ will be shown with live music on Wednesday, March 25 at 7 p.m. at the the Rogers Center for the Arts, Merrimack College, 315 North Turnpike St., North Andover, Mass. Admission is free. For more information, call the Rogers box office at (978) 837-5355. For more info on the music, visit www.jeffrapsis.com