Bring your own roar: Silent Tarzan flick
on Thursday, March 12 at Flying Monkey 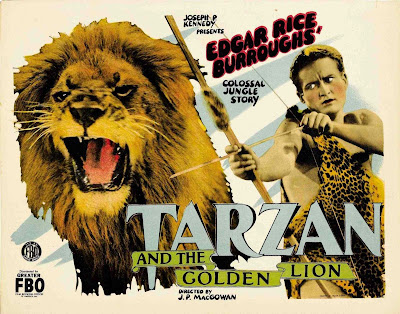 When George Lucas and Steven Spielberg made 'Raiders of the Lost Ark' (1981), it was films like 'Tarzan and the Golden Lion' (1927) that they were paying homage to.

That's all I can think every time I've played music for this film, an entry in the Tarzan catalog that was lost for decades until a print turned up a few years ago.

It starts off fast, and then really keeps moving. It has wily villains, damsels in distress, exotic locations, heroic rescues, and exciting stunts galore.

But a silent Tarzan? You have to remind audiences today that when these movies were made, no one thought of them as silent. They were simply the movies, and people fell in love with them without expecting to hear talk or dialogue.

It was only later that synchronized sound brought Tarzan's iconic yell to your local theater as part of the movie-going experience.

Yes, you can see Tarzan do his yell in 'Tarzan and the Golden Lion' as well as other silent Tarzan flicks. He beats his chest and opens his mouth and makes the jungle resound with his cry.

So I tell people: if you really really miss it, feel free to channel Carol Burnett and do your best Tarzan yell to fill in for him.

And some actually do!

Your next chance to be a vocal stand-in for Tarzan comes on Thursday, March 12, when I accompany a screening of 'Tarzan and the Golden Lion' at the Flying Monkey Moviehouse and Performance Center in Plymouth, N.H.

Hope to see you there. For more information, please check out the press release below. 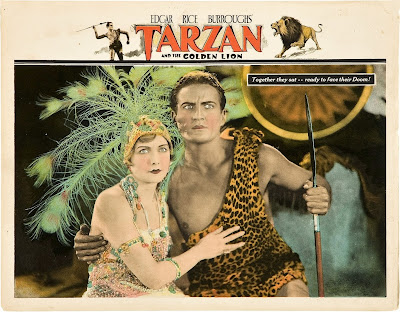 An original lobby card for 'Tarzan and the Golden Lion.'

Silent film 'Tarzan and The Golden Lion' at Flying Monkey on Thursday, March 12

PLYMOUTH, N.H.—You won't get to hear his famous jungle yell. But everything else that made Tarzan a vine-swinging movie legend will fill the big screen at an upcoming one-night-only silent film program at the Flying Monkey Moviehouse and Performance Center.

The silent program, set for Thursday, March 12 at 6:30 p.m., features 'Tarzan and the Golden Lion' (1927), an early Tarzan feature that helped popularize the character created by author Edgar Rice Burroughs.

'Tarzan and the Golden' was considered a lost film for many decades; its recent rediscovery has made it available for viewing for the first time since its original release.

The movie will be accompanied by live music performed by silent film composer Jeff Rapsis. General admission for the event is $10 per person.

'Tarzan and the Golden Lion' (1927) was an adaptation of a 1923 Burroughs novel of the same title. It was financed in part by Joseph P. Kennedy, patriarch of the Kennedy clan, whose 1920s business interests extended to movie production.

The film finds Tarzan forced to journey through the African jungle to the legendary City of Diamonds, where he and his pet lion Jadbal-ja must save an Englishwoman from being sacrificed to the Gods.

Playing Tarzan in this film is James H. Pierce, the fourth actor to portray the role on-screen. Pierce was a part-time actor who coached high school football in Glendale, Calif., where his squad included future actor John Wayne.

After landing the Tarzan role, Pierce married Burroughs' daughter Joan in 1928. Although other actors took over the Tarzan role in motion pictures, Pierce and his wife continued to voice the roles of Tarzan and Jane in a popular 1930s radio show.

Pierce later ran a real estate agency in southern California. He died in 1984; he and his wife are buried in Indiana with tombstones marked "Tarzan" and "Jane."

For decades, no copy of 'Tarzan and the Golden Lion' was thought to exist until a nearly complete print was recently discovered in a foreign archive.

The film has been restored and transferred to digital media so that audiences can enjoy it once again.

The Flying Monkey's silent film series aims to recreate the full silent film experience, with restored prints projected on the big screen, live music, and the presence of an audience. All these elements are essential to seeing silent films they way they were intended, Rapsis said.

"If you can put it all together again, these films still contain a lot of great stuff," Rapsis said. "By staging these screenings of features from Hollywood's early days, you can see why people first fell in love with the movies."

Upcoming movies include a classic Buster Keaton comedy and an adaptation of 'The Count of Monte Cristo' that was thought lost for decades.

The Flying Monkey originally opened a silent film moviehouse in the 1920s, and showed first-run Hollywood films to generations of area residents until closing several years ago. The theater has since been renovated by Alex Ray, owner of the Common Man restaurants, who created a performance space that hosts a wide range of music acts.

• Thursday, May 14, 2015, 6:30 p.m.: 'The Count of Monte Cristo' (1922) starring John Gilbert. The original screen adaptation of the Andre Dumas swashbuckler about a man unjustly imprisoned who later seeks revenge. A film thought lost for decades until a print surfaced in the Czech Republic!

The next installment in the Flying Monkey's silent film series will be 'Tarzan and the Golden Lion' (1927), to be screened with live music by Jeff Rapsis on Thursday, March 12 at 6:30 p.m. at the Flying Monkey Moviehouse and Performance Center, 39 South Main St., Plymouth, N.H. Tickets are $10 per person. For more information, call (603) 536-2551 or visit www.flyingmonkeynh.com. For more information about the music, visit www.jeffrapsis.com.