Men are from Mars—especially Harry Langdon...
'Tramp Tramp Tramp' in 35mm on Sunday, 10/4 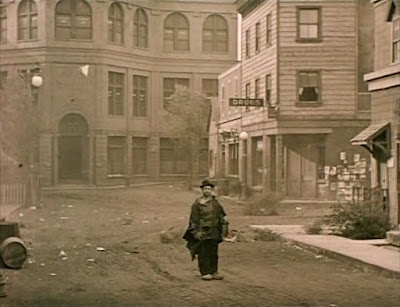 Harry Langdon arrives in a town about to be destroyed by a cyclone in 'Tramp Tramp Tramp' (1926).

This weekend brings the new Ridley Scott film, 'The Martian' (2015), which has drawn more attention than usual because of NASA's coincidental announcement this week that water's been found on the red planet.

How? Because we're screening 'Tramp Tramp Tramp' (via a 35mm print) on Sunday, Oct. 4 at the Somerville Theatre—just as Hurricane Joaquin threatens to arrive here on the New England coast.

Take that for topicality, Matt Damon!

The two films are distant cousins, actually, if only because Harry Langdon sometimes acts like he's a resident of Mars. So we're in for a weekend of alienation no matter what.

But that's the beauty of Langdon, I think—he's so different from what people expect from silent film comedy that he comes across as refreshing even today.

Another attraction of 'Tramp Tramp Tramp,' which helped rocket Langdon to worldwide fame for a brief time late in the silent era, is his co-star: a very young Joan Crawford. 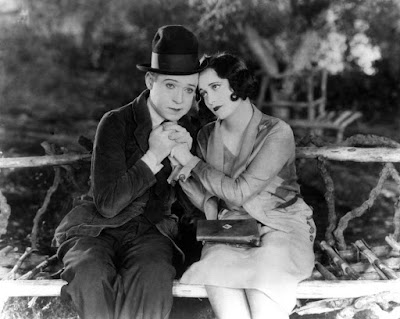 Incredibly, she plays Harry's love interest. How that all works, and what eventually results, you'll have to see to believe.

But whether (weather?) or not Hurricane Joaquin hits or misses us, 'Tramp Tramp Tramp' is a film well worth seeing for its great gags, and especially for its extensive outdoorsy location shooting that feels very much like a Buster Keaton picture.

And the cyclone sequence, said to partly inspire the better-known climax of Keaton's later masterpiece 'Steamboat Bill Jr.' (1928), is played out on a grand scale, with Langdon looking like a cross between Emmett Kelley and a street person.

Also, among those collaborating on the picture was a young scenario writer named Frank Capra, who would be promoted to first-time director on Langdon's very next feature, 'The Strong Man' (1926).

And finally, the film's opening scenes take place in...Massachusetts! How's that for a local connection?

So come in from the weather this Sunday and enjoy Langdon's 'Tramp Tramp Tramp' in 35mm: a rare chance to see the film in its original film format and with live music and an audience, as intended.

Showtime is 2 p.m. at the Somerville Theatre, 55 Davis Square, Somerville, Mass. Admission is $15 per person, or $12 for seniors/students.

For more info, check out the press release below: 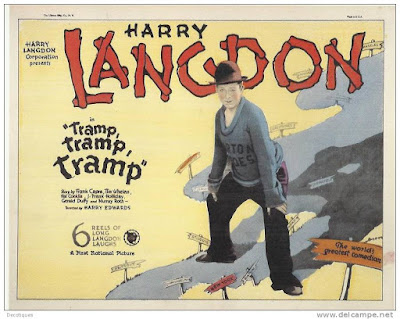 SOMERVILLE, Mass. — A silent film comedy written by Frank Capra will highlight the next installment of 'Silents, Please!' at the Somerville Theatre.

'Tramp, Tramp, Tramp' (1926), the first feature film of silent clown Harry Langdon, will be shown in 35mm and with live music on Sunday, Oct. 4 at 2 p.m. at the Somerville Theatre, 55 Davis Square, Somerville. General admission is $15; seniors/students $12.

The comedy follows Langdon's misadventures in a cross-country walking race that starts in Massachusetts.

Langdon, who rocketed to fame near the end of the silent film era, enters the contest to win prize money to save his father's shoe business.

Along the way, he tangles animals, criminals, railroad trains, and a spectacular cyclone that destroys an entire town. 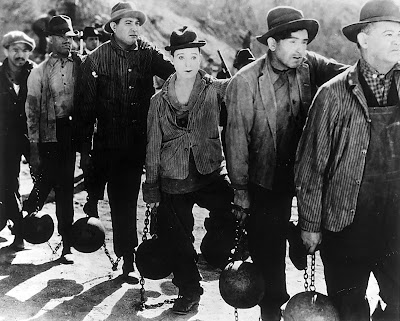 One of the iconic images of silent film comedy: Langdon on a chain gang in 'Tramp Tramp Tramp' (1926).

Harry also encounters romance, in the form of a very young Joan Crawford in one of her first major motion picture roles.

Also working on the film was Frank Capra, then a young scenario writer. Capra would be promoted to the director's chair for Langdon's next picture, 'The Strong Man' (1926), and then go on to one of Hollywood's most storied careers.

"The Langdon program continues our commitment to screening movies using real film whenever possible, and with live music for any silent films" said Ian Judge, the Somerville's general manager. "This is how these pictures were designed to be shown, and as time goes by, finding good prints and a theater with the know-how to handle them is getting harder to do."

Rapsis will improvise a musical score for 'Tramp Tramp Tramp' as the film is screened. In creating accompaniment for the Langdon feature and other vintage classics, Rapsis tries to bridge the gap between silent film and modern audiences.

Other upcoming features in the Somerville's "Silents, Please" series include:

• Sunday, Nov. 22, 2 p.m.: 'The Four Horsemen of the Apocalypse' (1921) starring Rudolph Valentino. Sweeping drama of a divided family with members caught up on opposites sides during World War I. Breakthrough film for Rudolph Valentino, introducing the sultry tango and launching him to stardom.

All entries in the Somerville's silent movie series are shown using actual film, the native format for cinema that few theaters are now equipped to run following Hollywood's transition to digital formats.