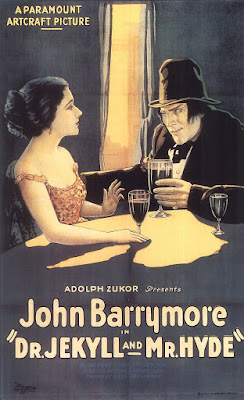 The 1920 version of 'Dr. Jekyll and Mr. Hyde' opens a long day of silent film accompaniment on Sunday, Oct. 25.

It's a back-to-back silent film creepfest this coming Sunday, with me doing music for two separate showings of two different films—and in two different states, no less.

And the programs are pretty tightly scheduled, too.

Then I high-tail it down to the Aeronaut Brewery in Somerville, Mass. for a Halloween-themed silent film program that starts at 8 p.m. Featured attraction is Lon Chaney in 'The Unknown' (1927). 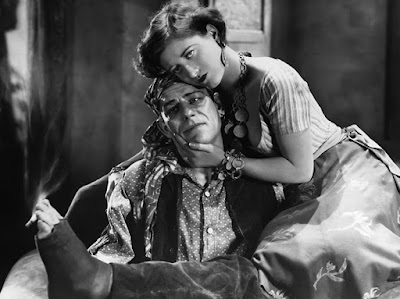 Lon Chaney and a very young Joan Crawford star in 'The Unknown' (1927).

Fast-paced automobile action is all part of the silent film experience. But not usually like this!

There's a press release about the 'Dr. Jekyll' screening that I've put at the end of this post if you want more info about the screening.

But before any of that, I'm down in Somerville, Mass. on Saturday, Oct. 24 to do music for 'Nosferatu' (1922) at an unusual event: the 100th birthday of a building that used to be a neighborhood movie palace but is now a regional center for ceramic arts.

The one-screen Broadway Theatre opened in 1915, and was a moviehouse until closing in 1982.

It then did time as warehouse space, but reopened in 2011 as Mudflat Studio, a non-profit school and studio for the ceramic arts, following a renovation that preserved elements of the theater throughout the structure.

The building is now a century old, and to celebrate its cinematic heritage, organizers are bringing back the movies as part of a day-long celebration.

Me, I'm a little nervous because I just found out the Boston Pops is doing a special 'Nosferatu With Live Music' event at Symphony Hall on Friday, Oct. 30.

Sheesh! I never thought I'd be going up against Keith Lockhart and the whole BSO establishment. I'm still expecting a phone call from someone with a raspy voice informing me that Boston "...isn't a big enough town for two Nosferatus" and suggesting I stick to the small-town circuit if I know what's good for me.

And I'll check under my car.

The Pops screening, by the way, features scoring from eight students at the Berklee College of Music, which is great. As a complete outsider to the world of academic music and the professional symphony scene, I'm glad to see that silent film gives young composers at least a chance to have their music played by a high-level ensemble.

Also, the Pops 'Nosferatu' screening is being held in conjunction with a blood drive, which I think is hilarious. Why isn't that done more often at screenings of this film? I might borrow that idea for future use.

Well, if you'd like to see 'Nosferatu' without making donations of either blood or treasure, check out the non-Pops one, with music by me. It's the only screening of the film I'm doing this year, and it's free, so come on down to Mudflat Studio at 81 Broadway, Somerville on Saturday, Oct. 24 at 7 p.m.

Okay, here's more info about the Jekyll and Hyde program in Wilton, N.H.

For more specifics about the 'The Unknown,' visit www.aeronautbrewing.com. We get a good crowd at screenings there and I'm eager to see the response to this film, one of Chaney's weirdest. 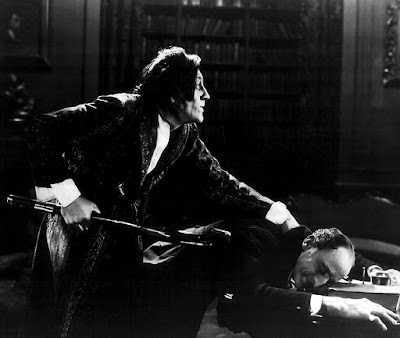 WILTON, N.H.—It was first a best-selling novel, then an immensely popular stage play. So it was just a matter of time before the movies tackled 'Dr. Jekyll & Mr. Hyde,' Robert Louis Stevenson's classic tale of a man tortured by two personalities—one thoroughly good and the other completely evil.

The Halloween-themed program, the latest in the Town Hall Theatre's silent film series, will be accompanied by live music performed by silent film composer Jeff Rapsis.

Admission is free, with a suggested donation of $5 per person to help defray expenses.

Dr. Jekyll, a London physician and philanthropist, becomes fascinated with the dual nature of man after the profligate Sir George Carew exposes him to temptation.

When Jekyll invents a potion that separates the good from the evil in a person, he decides to live both roles and names the evil persona Mr. Hyde.

Jekyll is in love with Millicent, the daughter of Sir George; meanwhile, Hyde prowls the poorer districts of London, debases and discards Theresa, a dance hall performer.

Jekyll's control over Hyde weakens gradually to the point where his alter ego resorts to murder, forcing Hyde into a showdown to save his loved ones and reign in the evil he himself has spawned. 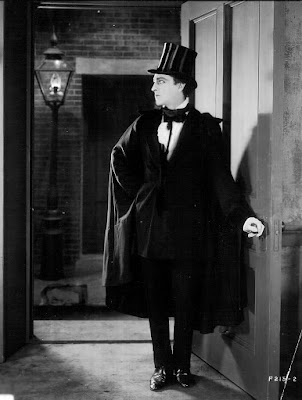 The film put Barrymore, a noted stage actor, on the cinematic map. Following 'Dr. Jekyll & Mr. Hyde,' Barrymore would go on to be one of the biggest stars of early cinema.

His handsome visage, dubbed "the great profile," was instantly recognizable to movie-goers of the time, who flocked to see Barrymore in later films such as 'Sherlock Holmes' (1922), 'Don Juan' (1926), and 'The Beloved Rogue' (1927).

In screening the original 'Dr. Jekyll & Mr. Hyde,' the Manchester Public Library aims to recreate all essential elements of silent film experience: high quality prints shown on a large screen, with live music and an audience.

Silent films with live music are screened regularly at the Wilton Town Hall Theatre, usually on the last Sunday of each month. Upcoming films include:

• Sunday, Nov. 29, 2015, 4:30 p.m.: Charlie Chaplin in 'The Kid' (1921). Chaplin's landmark comedy/drama about a man who raises an infant against all odds. Highlighted by amazing performance of four-year-old Coogan, who matches Chaplin pratfall for pratfall.

• Sunday, Dec. 27, 2015, 4:30 p.m.: Frank Capra's 'The Strong Man' (1926). With World War I over, baby-faced soldier Harry Langdon searches for the girl who sent such moving letters to him in the trenches. Directed by a very young Frank Capra, 'The Strong Man' is today hailed as one of the greatest comedies of the silent film era.

• Sunday, Feb. 14, 2016, 4:30 p.m.: Greta Garbo in 'The Kiss' (1929). Celebrate Valentine's Day with this steamy romantic thriller about a woman in an unhappy marriage who unexpectedly finds true love with another man. Will she risk everything and resort to murder?