The Halloween home stretch: 'Caligari,'
'The Lodger,' and Chaney in 'West of Zanzibar' 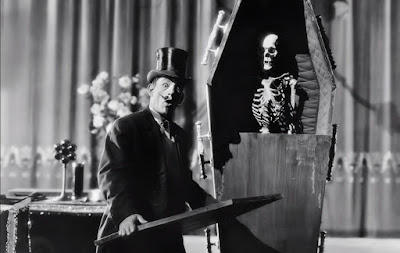 Lon Chaney as 'Phroso the Magician' and companion in 'West of Zanzibar' (1928).

Highlights include accompanying a 35mm print of 'West of Zanzibar' (1928), the lurid Chaney/Browning thriller, on Saturday, Oct. 31, and no less than three screenings of Hitchcock's 'The Lodger' (1927).

But the spooky fun starts tonight with 'The Cabinet of Dr. Caligari' (1920) at Wellesley College, just outside Boston. Screening is at 6:30 p.m. at Collins Cinema in the Davis Museum Complex.

Admission is free; the film is part of retrospective on film-making of Weimar-era Germany. 'Cabinet' is a good choice this close to Halloween—the proto-Tim Burton set design alone is worth seeing this film, which probably seems more creepy today than it did when first released. 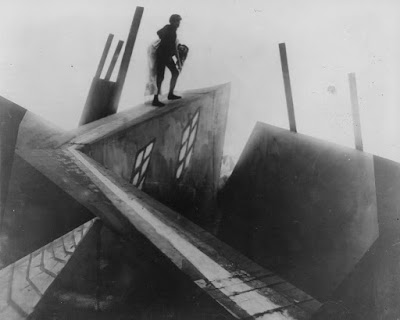 The twisted visual landscape of 'Caligari.'

One of the challenges of 'Caligari' is that the film has several instances of the title character ringing a sizable (and seemingly very loud) hand bell to attract attention from passersby in a carnival midway.

So for an accompanist, the question becomes: "Should I try to match the obvious on-screen action by ringing a real bell right there during the screening?"

In the case of Caligari, I do actually ring a bell. Specifically, it's a large clangy brass bell that once belonged to my grandmother. It makes quite a racket, and the cues in Caligari are easy to match, so I go for it.

Likewise in the case of the Keaton short 'The Haunted House,' where the ghost traffic is so heavy, Buster ends up playing traffic cop to control a busy hallway. To do this, he uses a whistle to signal stop and go, and blowing an actual whistle (while keeping the music going) helps punch up the gag, I think.

But if I'm unsure of where the cues might be, or if a sound effect might distract from the on-screen moment, I hold off on matching what are often literally the "bells and whistles."

Why? Because if you're even just a little bit off, it breaks the spell that a successful silent movie screening creates. Or if it's a key dramatic moment, you don't want to rob it of any significance by doing something unexpected in the accompaniment.

Anyway, it's my only screening of 'Caligari' this Halloween season, so come to Wellesley College tonight if you're hankering for a Halloween helping of German Expressionism. 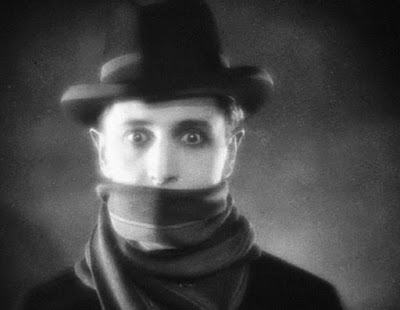 Ivor Novello dressed to kill (really?) in Hitchcock's 'The Lodger.'

Then follows three screenings of Alfred Hitchcock's 'The Lodger' (1927), the title I've focused on for this Halloween cycle, having played for it twice already this month.

• Thursday, Oct. 29, 2015, 7 p.m.: 'The Lodger'; Putnam Arts Lecture Hall, Keene State College, Keene, N.H. There's usually an admission charge for these screenings but I just checked and apparently this one is free and open to the public.

That's a whole lot of Lodgers. But I think I have some good material in the style of Bernard Herrmann that helps bring out the "Hitchcock" qualities of the film, which can be found throughout this early feature from the director.

For more specifics about each screening, check the "Upcoming Silent Film Screenings" link at upper right. 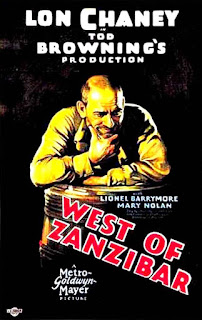 A screening of the Chaney/Browning silent MGM thriller will open a 12-hour Halloween marathon of feature films, all shown in 35mm, at the Somerville Theatre, 55 Davis Square, Somerville, Mass. The marathon is on Halloween Day and runs from noon to midnight.

From what I understand, the 35mm print of 'Zanzibar' is exceptionally well struck and in great shape. Also, it's very difficult to source 35mm prints of any of the MGM/Chaney/Browning pictures, so this is an extremely rare chance to see 'Zanzibar' in its native film format, projected on the enormous screen of the Somerville Theater's vintage 1914 main house.

It's quite a privilege to do live music for a film as bizarre as 'Zanzibar,' with Chaney playing a magician paralyzed from the waist down and bent on revenge against the man who crippled him and stole his beloved—a 20-year quest that leads to a showdown in the remote jungles of Africa. Classic Tod Browning madness, with no less than Lionel Barrymore in a key role.

I urge any classic film buffs in the Boston or New England area to consider making a pilgrimage to the Somerville to experience 'West of Zanzibar' on the big screen in 35mm, as well as the other marathon titles, all under the watchful eye and legendarily exacting standards of head projectionist David Kornfeld. It's an event not to be missed.

And then comes November, which brings silent film gigs in California and Virginia, among other places. More on that after Halloween!

One other thought: I'm always eager for new ways to attract audiences to silent cinema. So the other day, a friend suggested promoting the Chaney film as an inspirational tale for the disabled.

Being differently abled didn't prevent him from realizing his dreams of revenge!

Er—still thinking about that one.