This week: Romance in Manchester,
then double-feature dog adventure up north 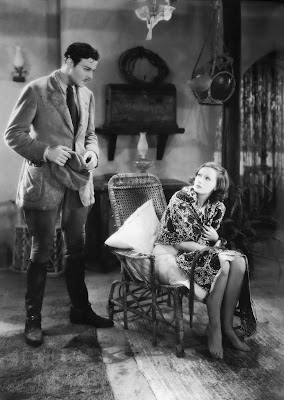 It's February, and the calendar brings with it two ways to warm up: screenings for Valentine's Day, and screenings at a small town historical society's annual pot luck supper and movie night.

Not that the occasions are mutually exclusive...

Showtime is 6 p.m.; admission is free, with donations accepted and oh-so-appreciated.

And then on Saturday, Feb. 6, I haul myself up to the Campton (again N.H.) Historical Society, where we're running a double feature of Rin Tin Tin adventure films.

Showtime is—well, the annual potluck supper is at 5 p.m., and we usually start the movie program sometime after 6 p.m.

Free admission again, although if you're attending the pot luck it's good manners to bring a dish to share.

Of the two programs, the Garbo film is new to me. And after doing two screenings of Griffith's 'Intolerance' in the past week (plus one of 'Metropolis'), I'm really looking forward to taking it slow and letting the romantic tension build.

I don't generally send out press releases for the Manchester City Library series, in part because I'm just lazy, but also because I tend to program obscure or lesser-known titles that are unlikely to draw a big crowd anyway.

We do have our loyal attendees, but anyone is welcome to pop in. Hope to see you there!

I did, however, send out a release for the program up in Campton, which is about an hour north of home base and in the foothills of the White Mountains.

So if you're interested in joining us on Saturday, Feb. 6, lots of detail below.

And one program note: I had also planned a Valentine's Day silent film screening at the Wilton (N.H.) Town Hall Theatre this month, but the schedule has become impossible.

Originally set for Sunday, Feb. 14, we had to move it to Sunday, Feb. 7. And then I had something come up which takes me out of the area that day. And then I'm booked for the rest of the month and into March, so...

So apologies to regular attendees of the monthly series in Wilton. We'll be back on schedule in March with 'Ben Hur' (1925) Sunday, March 27. (Hey, that's Easter!) 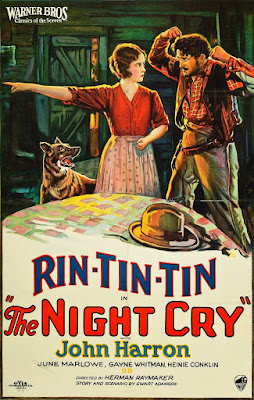 CAMPTON, N.H. — He couldn't speak. But that was no handicap for a star during the silent film era.

See for yourself on Saturday, Feb. 6, when the Campton Historical Society screens a double feature of vintage Rin Tin Tin silent adventure films with live music.

The evening begins with a pot luck supper at 5 p.m. The film program, which is free and open to the public, will start at about 6:15 p.m.

In 'The Night Cry' (1926), Rin Tin Tin is unjustly accused of killing sheep in ranching country; this forces him to flee for his life and hunt down the true killer on his own.

Both melodramas were produced by then-struggling Warner Bros. Studio. Rin Tin Tin films proved immensely popular around the world, with audiences marvelling at the then-new German Shepherd breed's feats of derring-do as he often out-smarted his human co-stars.

At the time, studio executives referred to Rin Tin Tin as "the mortgage lifter" because the dog's pictures helped rescue the ailing studio from bankruptcy. 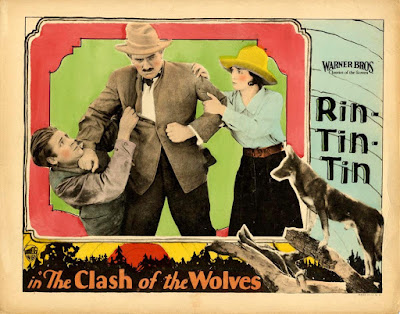 Both films at the Campton Historical Society will be accompanied live by silent film musician Jeff Rapsis, who uses a digital synthesizer to recreate the texture of a full orchestra.

"The Rin Tin Tin films are great pictures for audience reaction, even today," Rapsis said. "They're full of fast-paced action, great stunts—and above all, they really move!"

"If you're new to the silent film art form, seeing the Rin Tin Tin pictures in a theater with live music is a terrific way to get acquainted with the enduring power of this kind of movie-making," Rapsis said.

Rin Tin Tin remained popular until his death in 1932, which made headlines around the globe. But his progeny went on to star in later films and TV shows, keeping the name before the public for generations.

The Rin Tin Tin double feature at the Campton Historical Society aims to recreate the silent film experience as early movie audiences knew it: on the big screen, with live music, and with an audience.

"When you put the silent film experience back together, it's amazing how the movies jump to life," Rapsis said. "You can really get a sense of why people got so excited about movies when they were new."

A double feature of silent-era Rin Tin Tin adventures will be shown with live music on Saturday, Feb. 6 at 6:15 p.m. at the Campton Historical Society, Campton Town Hall, Route 175, Campton, N.H. The program is free and open to the public, and will be preceded by a pot luck supper starting at 5 p.m. For more details, visit www.camptonhistorical.org. For more info on the music, visit www.jeffrapsis.com.