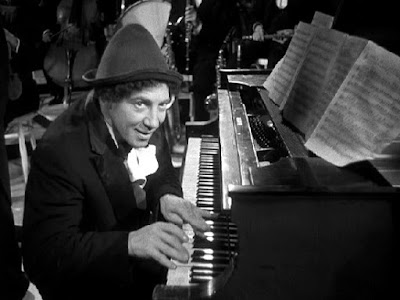 To paraphrase the Talking Heads song 'Once in a Lifetime':

And you may find yourself being asked to be Chico Marx.

And you may ask yourself: How did I get here?

The answer: not by letting the days go by, but doing silent film accompaniment at a Centennial Gala this Sunday at the Regent Theatre in Arlington, Mass.

I didn't expect to play Chico Marx as part of this—in fact, I found out only last night I'd be doing so.

Of course I said yes. A silent film accompanist has to be ready for anything, after all.

Plus, a chance to channel Chico is a great honor, as the piano-playing Marx was one of my big early influences.

Seriously! Watching the brothers on TV as a child, and seeing Chico cavort at the keyboard, made me first want to pound the horseteeth, as they say.

Plus, I liked how he alone seemed to be able to confound Groucho with a mixture of deliberate misunderstanding, illogic, and ethnic stereotype. 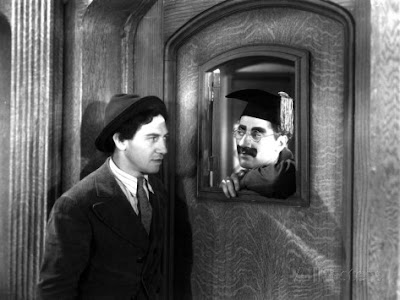 Hey, role models weren't exactly easy to come by for me!

So playing Chico Marx is an unexpected bonus to this event, which is part vaudeville and part silent film screening.

As part of the live show, I'm accompanying performer (and Groucho impersonator) Jerry Bisantz in 'Samovar the Lawyer,' a patter song from the 'Day in Hollywood, Night in the Ukraine' stage musical.

By the way: we ran through the music last night (which was when I found out I was playing Chico) and Jerry really does a great job with it!

But the main reason I'm on hand for the Centennial Gala is to accompany a screening of Mary Pickford in 'Rags,' a 1916 melodrama. 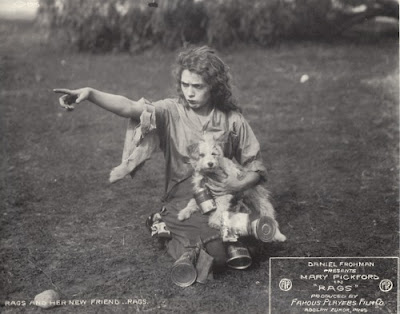 'Rags' was the very first film shown at the Regent—the main attraction on opening night, actually.

So in planning the Centennial Gala, Leland Stein and his colleagues at the Regent decided to include 'Rags' as a way of celebrating a century of showbiz and entertainment.

Fortunately, the film exists—not the case with most silent films. What's more, it was recently restored by the Mary Pickford Foundation, which supplied the film to the Regent.

So attendees of Sunday's event will get to see a pretty nice-looking edition of this rarelyscreened film, which I've never played for before.

The Gala, which is on Sunday, April 24 at 7 p.m. is packed with a lot of other entertainment, including jugglers, comedians, and more.

But don't take my word for it. Just check out the poster: 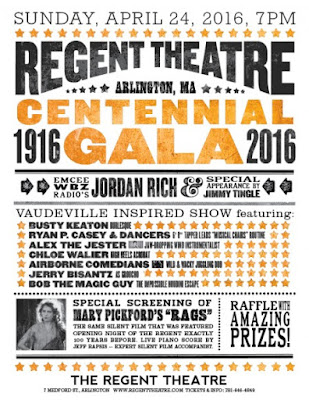 I understand seats are still available. So if you want to see 'Rags' in a theater with live music and an audience, please come join us!

You'll also get to see me as Chico Marx, and other performance including burlesque artist "Busty" Keaton.

The Regent is location on 7 Medford St. in Arlington, Mass. For more information, check them out online at www.regenttheatre.com.