Epic adventure on Thursday, April 14:
'The Thief of Bagdad' in Plymouth, N.H. 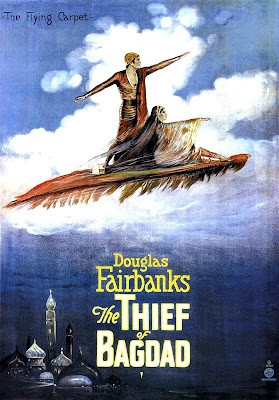 An original poster for 'The Thief of Bagdad.

That's the thought I have about 'The Thief of Bagdad,' the great adventure film that probably marked the high point in the career of Douglas Fairbanks Sr.

It was an age when filmmakers were exploring the limits of what this new medium, the motion picture, could do. And Fairbanks wanted to keep up.

So he created this adaptation of the 'One Thousand and One Nights' legends of Arabia. And he really hit it out of the park, if you ask me.

More than most silent films, this one puts me in the mind of a child going to see this film when it was first released. What a wonder it must have been!

And today, if you allow your inner child to come forth, 'The Thief of Bagdad' still is.

So what about those two films in one?

Well, the film's first half plays like a fantastical romance. Set in a mythical Bagdad of yore (created in Art Deco style by William Cameron Menzies), the first half contains more than enough story and visual splendor to satisfy a movie-goer of the time, or of any time, really.

In the second half, Fairbanks busts out of the boundaries of Bagdad and takes the film into flights of pure visual fantasy.

We get underwater sequences, battles with monsters, animated trees—not to mention the famous flying carpet.

There had been nothing like it in cinema, and really hasn't been anything quite like it since, I think.

See it for yourself on the big screen on Thursday, April 14, when we screen 'The Thief of Bagdad' at the Flying Monkey Moviehouse and Performance Center in Plymouth, N.H.

More details in the press release below. Hope you can join us! 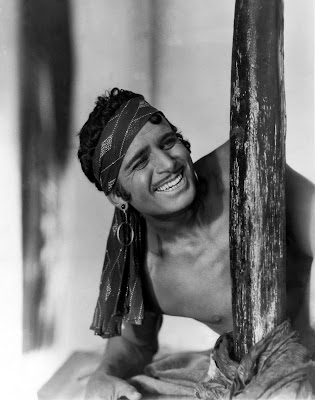 Douglas Fairbanks Sr. playing the title role in 'The Thief of Bagdad.'

Flying Monkey to screen 'The Thief of Bagdad' (1924) with live music on Thursday, April 14

PLYMOUTH, N.H. — Silent film with live music returns to the Flying Monkey Moviehouse and Performance Center with a screening of one of early Hollywood's most exciting fantasy adventure movies.

The screening continues the Flying Monkey's monthly series of silent film screenings, which aims to revive big-screen showings of great silent features—the films that first caused audiences to fall in love with the movies.

"If you've never seen a silent film in a theater with live music and an audience, the Fairbanks pictures are a great way to experience the medium at its best," Rapsis said. "When you put all the elements together, silent film has an ability to stir up emotions in a way that no other medium can."

The athletic Fairbanks was the Harrison Ford of his time—a pioneering action hero among the first to entertain movie audiences with thrilling on-screen adventures. Among his best work is 'The Thief of Bagdad' (1924), a timeless adventure boasting a great story, spectacular sets, and magical special effects.

In 'The Thief of Bagdad,' a bare-chested Fairbanks plays a crafty rogue who easily steals everything his heart desires—everything, that is, except the love of a beautiful princess, daughter of the powerful Caliph of Bagdad.

To win her hand, he must not only change his ways, but also convince her of his worthiness over many other highly placed suitors.

In making the film, Fairbanks spared no expense for what some critics still regard as the most lavish fantasy movie ever made, a show-stopping adaptation of the traditional "A Thousand and One Nights" story in which a flying carpet is just one of many eye-popping sights that astounded movies audiences at the time.

The jaunty opening is a preamble to the film's spectacular second half, in which the repentant thief embarks on an odyssey through caverns of fire, underwater palaces, and even outer space. Special effects range from a smoke-belching dragon to a magical flying horse, and still glow with a timeless sense of wonder from the early days of movies. 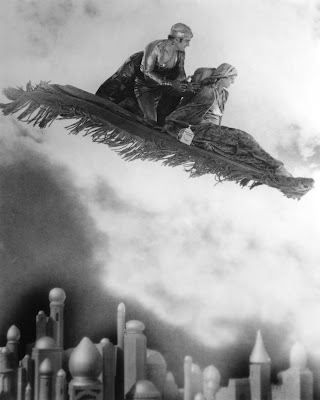 Soaring over a stylized Bagdad skyline.

William Cameron Menzies's sets were among the largest ever created for a motion picture. Especially noteworthy is his design for a mythical Bagdad, a unique combination of Art Deco and Islamic elements—a dream city inspired by illustrations from story books.

Fairbanks, one of the most popular stars of the 1920s, was the inspiration for the character of George Valentin in the recent Oscar-winning Best Picture 'The Artist' (2011). Fairbanks was known for films that used the then-new medium of motion pictures to transport audiences to historical time periods for grand adventures and athletic stunts. He's often referred to as "Douglas Fairbanks Sr." to avoid confusion with his son, the actor Douglas Fairbanks Jr.

Live music for 'The Thief of Bagdad' will be provided by silent film accompanist Jeff Rapsis, who uses a digital synthesizer to create a traditional full orchestra "movie score" sound.

More than 90 nears after its premiere, 'The Thief of Bagdad' continues to be held in high regard. In 1996, the film was selected for preservation in the U.S. National Film Registry by the Library of Congress as being "culturally, historically, or aesthetically significant."

Fairbanks himself considered 'The Thief of Bagdad' to be his personal favorite of all of his films.

'The Thief of Bagdad' is appropriate for family audiences, although very small children may find some sequences frightening. The film runs 2 hours and 34 minutes.

• Thursday, June 9, 2016, 6:30 p.m.: "The Winning of Barbara Worth" (1926). Epic Western drama starring Ronald Colman and Gary Cooper about the settling and irrigation of California's Imperial Valley, once a wasteland but now an agricultural paradise.

All movies in Flying Monkey's silent film series are rarely screened in a way that allows them to be seen at their best. To revive them, organizers aim to show the films as they were intended—in top quality restored prints, on a large screen, with live music, and with an audience.

'The Thief of Bagdad' (1924) starring Douglas Fairbanks will be screened with live music on Thursday, April 14 at 6:30 p.m. at the Flying Monkey Moviehouse and Performance Center, 39 South Main St. in Plymouth, N.H. Admission is $10 per person. For more information, call the theater at (603) 536-2551 or visit www.flyingmonkeynh.com; for more information on the music, visit www.jeffrapsis.com.