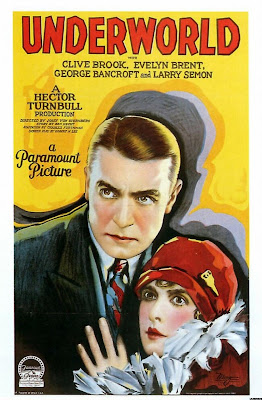 Clive Brook and Evelyn Brent on a poster for 'Underworld.'

When programming a silent film series, I sometimes look for occasions to celebrate.

If a screening is around July 14 (Bastille Day), then that's a good reason to run 'Orphans of the Storm' (1922), D.W. Griffith's French Revolution epic.

So in putting together this year's schedule for Red River Theatres in Concord, N.H., I saw one of the dates was April 15.

April 15? Well, there's a day that's well-known to all U.S. residents, as it's the deadline for federal income tax filings.

What silent film would be appropriate for that? There's none about IRS agents that I can think of.

So I settled for a picture that would be something of a catharsis: a movie in which people battle government agents.

They're always one step ahead of the law, of course. What's more, the movie has extended shoot-outs with federal agents.

So what better way to blow off some steam after ponying up to the federal government to pay your share for all it does? 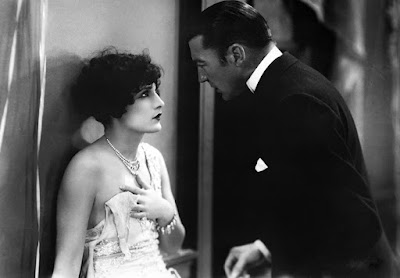 Plus, it's one of those pictures I put in the category of "mature" silent film: the really polished productions that were hitting theaters in the last three or four years before talkies took over.

Well worth a look see. So pull the trigger and come join us this evening at Red River Theatres for 'Underworld.' You're sure to get a bang out of it.

More details? Check out the press release I've included below. 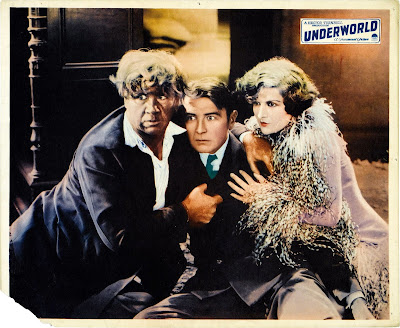 A color-enhanced still for 'Underworld.'

The film will be accompanied live by silent film musician Jeff Rapsis. Admission is $10 per person.

'Underworld,' directed by Josef von Sternberg and starring George Bancroft, is notable for being the first major motion picture to portray a criminal in a sympathetic light instead of as a villain. Its popularity touched off a Prohibition-era boom in Hollywood gangster pictures that reached its peak following the stock market crash of 1929.

"We figured a fitting way to mark the date our taxes are due was to screen a picture full of people battling federal agents," Rapsis said.

Bancroft's performance in 'Underworld' set the stage for memorable characterizations of gangster protagonists by Jimmy Cagney ('Public Enemy,' 1931), Paul Muni ('Scarface,' 1932), and Edward G. Robinson ('Little Caesar,' 1930), which all follow directly on from the model created by 'Underworld.'

The film's script, by Chicago newspaperman Ben Hecht, earned an Oscar for Best Screenwriting at the first-ever Academy Awards. The film is also noted for director von Sternberg's innovative use of black-and-white photography, which presaged many film noir techniques in following decades.

Director Von Sternberg was obsessed by light, and developed methods of “painting” his compositions with the arrangements of lamps, scrims, and reflectors on the set. Today he is remembered most for having used that skill in a series of films he made with Marlene Dietrich, starting with 'The Blue Angel' (1930) and continuing in six more star vehicles made in Hollywood, including 'Morocco' (1930) and 'Shanghai Express' (1932).

'Underworld' will be accompanied by live music by Jeff Rapsis, a New Hampshire-based silent film accompanist who performs at venues across the region and beyond.

"Films such as 'Underworld' were created to be shown on the big screen and in a theater as a shared experience," Rapsis said. "With an audience and live music, they still come to life in the way their makers intended them to.

'Underworld' is the latest in an monthly series of great silent films with live music at Red River. Upcoming programs include:

• Friday, May 13: 'The Golem' (1920), a pioneering German fantasy in which a rabbi brings a statue to life protect the Jews of 16th century Prague from persecution.

• Friday, June 10: 'The General' (1927), Buster Keaton's classic comic adventure epic of an Southern engineer and his locomotive during the U.S. Civil War.