This weekend: pot luck and Raymond Griffith
in Campton NH, then '7th Heaven' in Wilton NH 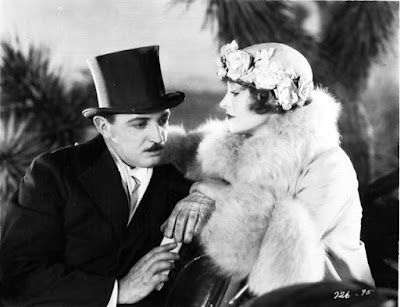 Raymond Griffith and Betty Compson in 'Paths to Paradise' (1925), screening this Saturday in Campton, N.H.

Just another weekend here in wintery New Hampshire. The New England Patriots are in the Super Bowl (no news there) and I'm doing music for silent film screenings in the hamlets of Campton, N.H. and Wilton, N.H.

First up; an annual pot-luck-supper-and-silent-movie combo at the Historical Society of Campton, N.H., a picturesque small town in the foothills of New Hampshire's White Mountains.

I'll haul myself up there late Saturday afternoon and set up everything in the small hall. Then it's supper at 5 p.m. followed by movies at whatever time everyone finishes cleaning their plates.

This has become one of my favorite annual gigs mostly because the people are great, but also because the hall really is small, which means everyone has to pack in.

And this creates an energy that leads to explosive audience reactions and a remarkable shared experience, which is one of the great and enduring glories of silent film.

This year's program is a little daring in that it features Raymond Griffith, a star that most people today have never heard of.

But I think the good folks of Campton, after several years of silent film programs, are ready for something out of the ordinary.

We'll see! The screening is open to the public and more info is available in the press release pasted in below.

Then Sunday, Feb. 5 brings the SUPER BOWL, but also a screening of the Frank Borzage-directed drama '7th Heaven' (1927) at the Town Hall Theatre in Wilton, N.H. 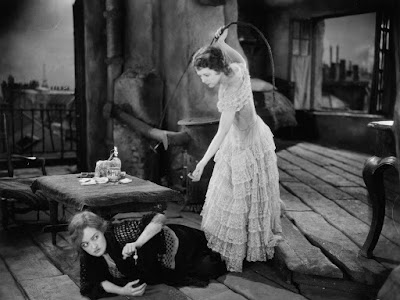 In Wilton, we usually run silent film with live music at the end of each month.

So we rescheduled Wilton for the first weekend in February, and programmed the romantic drama '7th Heaven,' thus turning it into a "Super Bowl Widows" event as well as a pre-Valentine's Day screening.

Well, whatever your reason for attending, '7th Heaven' is worth a look. Not only is it one of the late silent era's big romantic dramas, but it helped Janet Gaynor win Best Actress in the very first Academy Awards. (I say "helped" because at the time the awards was given in recognition of all films a performer made in a given year.)

Showtime in Wilton is Sunday, Feb. 5 at 4:30 p.m. Admission is free, with donations accepted. One tip: bring lots of tissues and hankies!

And here's a secret: whatever your reason for attending, we'll be done in time for you to see the kick-off of the Super Bowl LI!

Okay, here's the press release for the Raymond Griffith screening: 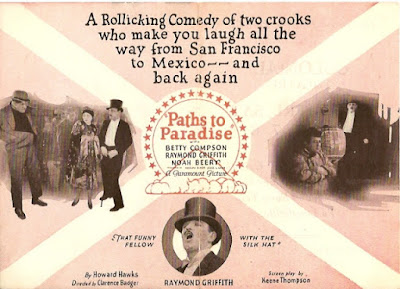 CAMPTON, N.H.—He was a silent film actor who really couldn't talk, thanks to a childhood vocal injury.

He was Raymond Griffith, the 'Silk Hat' comedian, whose popularity in the 1920s rivaled that of Charlie Chaplin and Buster Keaton.

See for yourself on Saturday, Feb. 4, when the Campton Historical Society screens 'Paths to Paradise' (1925), one of Griffith's best surviving titles.

The evening begins with a pot luck supper at 5 p.m. The film program, which is free and open to the public, will start at about 6:15 p.m.

In screening 'Paths to Paradise,' the Campton Historical Society hopes to provide a window into a lost era of entertainment.

Most of his starring feature films have since disappeared, causing Griffith to be virtually unknown today.

But the elegantly dressed comic, who as a youngster attended St. Anselm Prep School in Goffstown, N.H., was among the most popular movie actors of the 1920s.

"Griffith's character was that of a quick-thinking gentleman, usually dressed in a top hat and a cape, who enjoyed outwitting con artists and crooks at their own game," said Jeff Rapsis, a New Hampshire-based silent film accompanist who will improvise music for the program.

"It turns out he was very different from Chaplin or Keaton, and so were his films—they seem a bit more cynical and so perhaps more modern. But we've shown them before and they hold up well with a live audience today."

'Paths to Paradise' (1925) stars Griffith as a con man who competes with a feisty female jewel thief to steal a heavily guarded diamond necklace. The film is highlighted by a wild car chase filmed on location in the California desert.

Unfortunately, all existing prints of 'Paths to Paradise' are missing the final 10 minutes. But the film ends at a point that completes the plot and provides a satisfying finish.

"The majority of silent films have disappeared completely, and those that do survive are often missing pieces," Rapsis said. "Many, including 'Paths to Paradise,' have come down to us like the Venus de Milo—the arms are missing, but it's still a work of art worth appreciating."

'Paths to Paradise' was prodcued by Paramount Pictures, where Griffith was under contract in the 1920s as one of the studio's leading stars.

Born in Boston in 1895, Griffith injured his vocal cords at an early age, rendering him unable to speak above the level of a hoarse whisper.

After appearing in circuses and attending at least one year (1905-06) at St. Anselm Preparatory School in Goffstown, N.H., he went on to serve in the U.S. Navy prior to World War I and in 1915 wound up in Hollywood, where the movie business was already booming.

Early on, Griffith worked at Mack Sennett's Keystone studio, where he developed a reputation as an excellent actor and a superb comedy writer and director. He eventually gravitated to behind-the-camera duties, serving as Sennett's right-hand man for a time.

He eventually moved to the then-new Paramount studios in the early 1920s, where he began to appear again in on-camera roles.

Griffith's mastery of character parts made him immediately popular, prompting Paramount to star him in his own movies starting in 1924. Ironically, his ability to speak caused him to develop pantomime abilities just to get through life—excellent training for sielnt film.

In the next few years, Griffith completed a dozen feature films, most of which today are lost due to neglect or improper storage.

"Though he's not as well known today as Charlie Chaplin or Douglas Fairbanks Sr., Raymond Griffith was doing some really good work during the peak of his career," Rapsis said. "It's great that the public will get a chance to appreciate Griffith films at the Campton Historical Society."

The program at the Campton Historical Society aims to recreate the silent film experience as early movie audiences knew it: on the big screen, with live music, and with an audience.

"When you put the silent film experience back together, it's amazing how the movies jump to life," Rapsis said. "You can really get a sense of why people got so excited about movies when they were new."

Raymond Griffith's 'Paths to Paradise' (1925) will be shown with live music on Saturday, Feb. 4 at 6:15 p.m. at the Campton Historical Society, Campton Town Hall, Route 175, Campton, N.H. The progrm is free and open to the public, and will be preceded by a pot luck supper starting at 5 p.m. For more details, visit www.camptonhistorical.org.