Back for another season in Brandon, starting tonight with early 'Our Gang' comedies 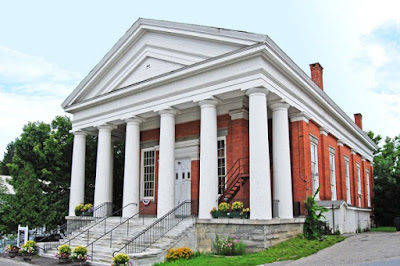 One of the nice things about doing silent film screenings is that I've been to many places I otherwise wouldn't have visited.

One place I keep returning to is Brandon, Vt., a town due north from Rutland and birthplace of noted 19th century statesman Stephen Douglas.

It's also home to Brandon Town Hall, where silent films are presented with live music once a month from May to October.

We've been doing this for something like eight years now.

One reason I like going there is the acoustics. Although built in 1860, long before movies existed, the Town Hall nevertheless is a great space for silent films and live music.

But the main reason is the audience. Brandon reliably produces large and enthusiastic crowds, and the engagement they have with silent films is really inspiring.

Also, it seems like a good cross-section of the whole town turns out—everyone from tiny tots to octogenarians, to borrow Walter Kerr's phrase.

So they keep asking me back, and I keep coming. And the calendar says May, so once again it's time to make monthly trips to northern Vermont.

Our first screening of the season is tonight: Saturday, May 13. And we're starting off with a festival of early silent 'Our Gang' comedies.

We've always been fortunate at getting press for the Brandon silent film screenings. This time, we were blessed with a nice feature in the Rutland Herald!

For more information about tonight's screening, and about all the programs in this year's Brandon Town Hall silent film series, check out the press release below. 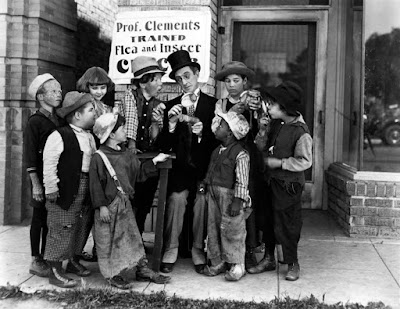 A scene from 'Thundering Fleas' (1926), one of the early silent 'Our Gang' comedies we'll screen on Saturday, May 13 at Brandon (Vt.) Town Hall.

Schedule leads off on Saturday, May 13 with early films of the 'Little Rascals'; featured stars include Buster Keaton, W.C. Fields, and Harry Houdini

BRANDON, Vt.—Classics of the silent film era return to the big screen starting next month in Brandon Town Hall, which will host another season of vintage cinema with live music in the historic facility.

It's the 7th year of the town hall's popular silent film series, which gives residents and visitors a chance to see great movies from the pioneering days of cinema as they were intended to be shown—on the big screen, with an audience, and accompanied by live music.

Screenings are held once a month on Saturday nights starting in May and running through October. Admission is free; donations are encouraged, with proceeds to benefit the Town Hall's ongoing restoration.

Live music for each silent film program will be provided by Jeff Rapsis, a New Hampshire-based performer and composer who specializes in scoring silent films.

"It's great to be bringing silent film back to the big screen in Brandon for another series," Rapsis said. "Brandon Town Hall is a wonderful place for these movies to be seen at their best."

First up in this season's line-up is a festival celebrating the "Little Rascals," the long-running film series that featured child actors and which began in the silent era as "Our Gang" comedies.

First appearing in 1922, the "Our Gang" comedies followed a tribe of neighborhood children and their misadventures. The series proved immediately popular, making the transition to sound in 1929 and continuing through 1944.

The silent "Our Gang" comedies were produced long before the debut of enduringly popular cast members such as Alfalfa, Spanky, and Darlene, who came along much later.

Rather, the earlier films feature a completely different cast, but sporting the same diverse make-up of personalities that was a hallmark of the series.

As the young cast members grew older, they would be rotated out of the line-up and replaced by younger members.

The "Little Rascals" festival in Brandon includes four short comedies released during the silent era. In them, the gang tries its hand at railroading, stages its own version of 'Uncle Tom's Cabin,' gets in trouble with a flea circus, and forms its own fire department.

"Many of us grew up watching the 'Little Rascals' on television, and so it's fascinating to discover the earlier silent film episodes of the series," Rapsis said.

The silent "Little Rascals" festival is on Saturday, May 13 at 7 p.m. at Brandon Town Hall. Admission is free, with donations welcome.

The program is sponsored by Nancy and Gary Meffe.

• Saturday, June 17: 'Running Wild' (1927) starring W.C. Fields. In one of his best silent roles, Fields plays a hen-pecked husband who lacks the courage to stand up to his domineering wife—until an inadvertent encounter with a hypnotist completely upends the family's domestic status quo. Sponsored by Vermont Country Store.

• Saturday, July 15: A Dare-Devil Aviation Double Feature! In 'The Phantom Flyer' (1928) famous stunt pilot Al Wilson portrays a border patrol aviator who uses his flying skills to save girlfriend Mary (Lillian Gilmore) from cattle rustlers. And in 'The Sky Rider' (1928), join Champion the Wonder Dog as he flies along with his master Dick to foil the plot of a disinherited nephew to get even with—well, it's complicated! Sponsored by Pam and Steve Douglass.

• Saturday, Aug. 12: 'Go West' (1925) starring Buster Keaton. Buster heads out to ranch country, where the stone-faced comedian encounters romance with—a cow! Can he save his love from a trip to the livestock yards? Rustle up some belly laughs as Buster must once again prove himself worthy to all those who doubt him. Sponsored by Brandon/Forestdale Lions Club.

• Saturday, Sept. 16: Harry Houdini Silent Film Double Feature. Rare surviving films from the great illusionist's brief movie career. In 'Terror Island' (1920) Houdini stars as a swashbuckling inventor who steers his high-tech submarine to a forbidden tropical isle to rescue the woman he loves; in 'The Man From Beyond' (1922), Houdini plays a man frozen 100 years in the Arctic who returns to civilization to reclaim his reincarnated love. Sponsored by an Anonymous Donor.

However, the Brandon series enables film fans to really understand the power of early cinema, which was intended to be shown on a big screen, with live music, and with an audience.

"Put those elements together like we do in Brandon, and films from the silent era spring right back to life in a way that helps you understand why people first fell in love with the movies," Rapsis said.

A program featuring early episodes of the "Our Gang" Little Rascals series will lead off this season's silent film series on Saturday, May 13 at 7 p.m. at Brandon Town Hall and Community Center, Route 7, in Brandon, Vt.

Admission is free; free will donations are encouraged, with proceeds to support ongoing renovation of the town hall. For more information, visit www.brandontownhall.org. For more info on the music, visit www.jeffrapsis.com.