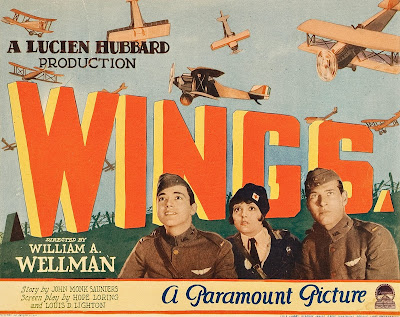 The screening is at yet another small town New Hampshire venue—in Webster, a town due north of Concord, at the local Public Library/Town Hall.

We're starting at 6 p.m. so if you're planning to join us and experience this great film, be sure to have an early dinner and get down to join us.

Many thanks to everyone at the Webster Public Library and Webster Historical Society for including 'Wings' as part of a series of local events marking the centennial of the U.S. entry into World War I.

And thanks also to the N.H. Humanities Council for helping underwrite this program. First time that's ever happened for me!

For more details, check out the press release below. See you there! 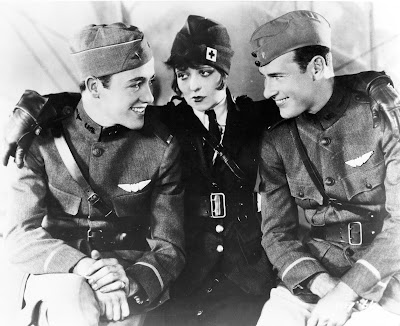 The program, sponsored by the library and historical society with a grant from the N.H. Humanities Council, is part of a series of local events to commemorate the centennial of the U.S. involvement in World War I.

Admission to the show is free, although donations are accepted. The public is welcome to attend.

" 'Wings' is not only a terrific movie, but seeing it on the big screen is also a great chance to appreciate what earlier generations of servicemen and women endured," accompanist Jeff Rapsis said.

"It's a war that has faded somewhat from our collective consciousness, but it defined life in the United States for a big chunk of the 20th century. This film captures how World War I affected the nation, and also shows in detail what it was like to serve one's country a century ago."

'Wings' is about 2½ hours long. The film is a family-friendly drama but not suitable for very young children due to its length and intense wartime battle scenes. Also, attendees are encouraged to bring cushions to use on the venue's chairs.

The program is part of the "Museums Sharing Experiences" group, which is coordinating activities in many locations around the theme of "Over There, Over Here: World War I and Life in N.H. Communities." For more information, visit www.overthereoverhere.com.

‘Wings’ will be shown with live music on Friday, May 12 at 6 p.m. at Webster Public Library/Town Hall, 947 Battle St. (Route 127) in Webster, N.H. The program, organized by the Webster Public Library and Webster Historical Society, is free and open to the public. For more info, visit www.websterhistoricalsociety.org. For more info about the music, visit www.jeffrapsis.com.