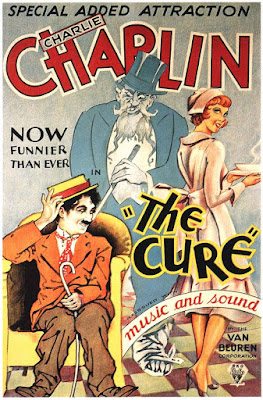 On this weekend's California-style menu: short comedies, including Chaplin's 'The Cure' (1917).

Before we talk film, let's hear it for frequent flier miles!

And also for cutthroat competition in the Boston-to-San Francisco market, where no less than four airlines are duking it out. Delta, United, JetBlue, Alaska. And I might be leaving one out.

That means something like 15 daily non-stops each way (I'm not kidding) between the two cities. And that in turn means low fares.

But who actually pays cash? Instead, I cross the continent with a paltry outlay of frequent flier miles. Take that, Lewis & Clark!

And this confluence of competition and machines that travel at 550 mph enables me to occupy a semi-regular schedule at the Niles Essanay Silent Film Museum, across the bay from San Francisco. 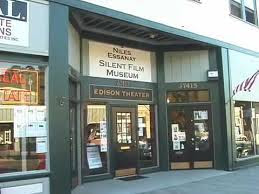 Why Niles? Well, it's the only theater I can think of that runs a different full-evening program of silent films (shorts and features) each and every week all year round. And they've kept that pace going for more than a decade!

So just as religious pilgrims follow Spain's Camino de Santiago, as a silent film accompanist eager to practice the craft, I make my own pilgrimage to silent film holy ground. Plus, they often run William S. Hart features than never get shown anywhere else.

I love sitting in the dark and getting absorbed by an obscure drama that might have thrilled my great-grandparents.

By semi-regular, my visits work out to twice a year: usually May and then November. But this year, a scheduling quirk has enabled me to also be at Niles for their annual "Chaplin Days" festival in June. 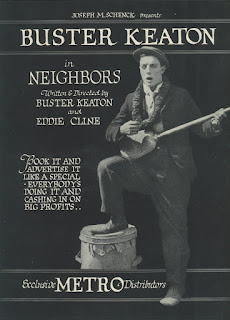 But first up: Saturday, May 18, where I'll sit in for a program of comedy shorts starring many of the big names: Chaplin's 'The Cure'; Keaton's 'Neighbors'; Laurel & Hardy's 'Second Hundred Years,' and Charley Chase in 'Dog Shy.'

It's an honor to do music for these pictures, which for me and so many others were the gateway drug that got us into silent film. I love to think that the audience for Saturday night's show might be a few folks who will make their own discovery of this unusual art form.

That's important to remember. The films may be familiar, or even old hat, to long-time silent film fans (although I don't think I've ever accompanied the Chase comedy), but not to most other people. So a key part of accompanying them, I think, is to remember the spirit of surprise and delight that often also accompanies seeing them for the first time.

Well, if you're in the Bay Area, please stop in for a visit. And if you miss this weekend, I'll be back on Friday, June 28 to accompany Chaplin's 'Shoulder Arms' (1918) as part of the Museum's annual "Chaplin Days" celebration.

See, while under contract with the Essanay Film Co., everyone's favorite tramp filmed several comedies (including 'The Tramp') at the firm's studio in Niles, in and around the neighborhood. (Hence the "Holy Ground" reference above.

It's really quite a connection to Chaplin's early years, and the museum makes the most of it. And I'm delighted to be helping out with this year's edition.

For more info on the Niles Essanay museum, visit http://nilesfilmmuseum.org/. And for an idea of what "Chaplin Days" is like in Niles, check out the photo below: 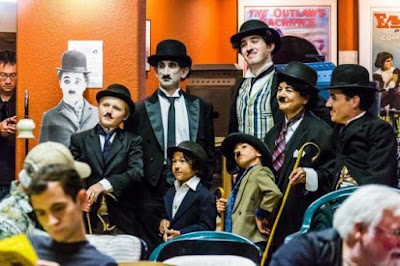