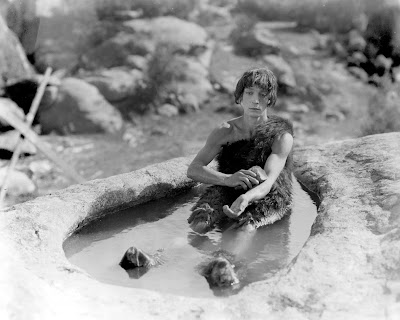 Buster practices pre-historic self-sanitization in 'Three Ages' (1923), to be screened on Wednesday, Aug. 5 at the Flying Monkey.

In these times of trouble, how about some timeless comedy?

Think of it as a public service: an attempt to alleviate the Great Levity Shortage of 2020.

The Keaton screening ends an intermission of more than four months at the Flying Monkey, where the last film I accompanied was a Western, 'Wild Horse Mesa' (1925), in mid-March.

But we're back in business, with a varied program of silents all with live music, and all scheduled to run (well, mostly) on the last Wednesday of each month.

One necessary nod to today's reality: the Flying Monkey is following all local public health and CDC guidelines to keep patrons safe. Masks, limited capacity, social distancing, hand sanitizing: they're all part of the show.

With Buster, only the laughter should be contagious. And boy, could we ever use a big dose of that.

Hope to see you there! For more about 'Three Ages,' and a preview of other films scheduled for later months, check out the press release below.

And let me note here that if 'Three Ages' isn't enough to cure your Keaton withdrawal, we have 'The General' (1926) and 'Steamboat Bill Jr. (1928) running next month as part of Silent Film Comedy Week at the Town Hall Theatre in Wilton, N.H.

More on that later, but check out this story posted on the web site of Box Office Pro. 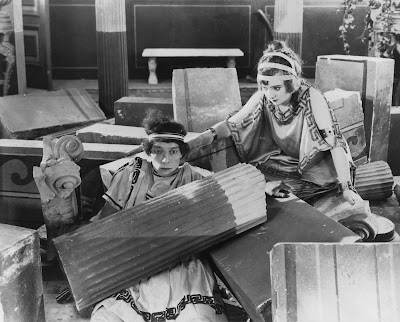 PLYMOUTH, N.H.—It's a comeback worth making some noise about.

After a four-month hiatus due to Covid-19, the long-running silent film series at the Flying Monkey will resume in August.

"In these times, we need laughter more than ever," Rapsis said. "So it was only natural to restart our silent film series with one of the era's legendary comedians, Buster Keaton."

Keaton himself never smiled on camera, earning him the nickname of "the Great Stone Face." But his comedies rocked Hollywood's silent era with laughter throughout the 1920s. 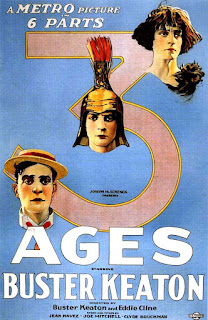 The three-stories-in-one approach was Keaton's first attempt at a feature-length comedy. If 'Three Ages' ran into box office trouble, Keaton planned to split it up into three shorter films to be released separately.

But the picture was a hit, due to inspired comic touches that still shine through today. 'Three Ages' launched Keaton's spectacular run of classic comic features that lasted until the industry's transition to sound pictures in 1929.

Although 'Three Ages' spans three historical eras, Keaton performs jaw-dropping physical comedy in each of them.

The "caveman" sequences feature knockabout comedy with Buster in a bearskin outfit; the Roman scenes include a wild chariot race held during a snowstorm; and the modern era scenes include one of the great silent film chases. 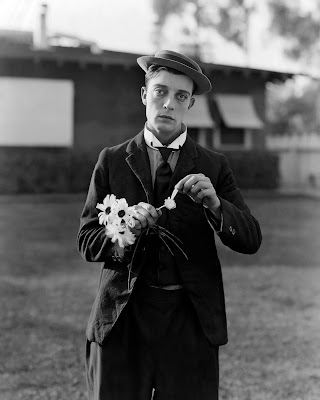 "If you've never seen a silent comedy in a theater with an audience and live music, you're missing one of the cinema's great experiences," said Rapsis, who accompanies more than 100 silent film programs each year.

Rapsis emphasized the unique experience of seeing early cinema as it was originally presented.

'Three Ages' opens a monthly series of silent film programs at the Flying Monkey that include more comedy, plus drama, horror, and an unusual Russian documentary. On the schedule:

• Wednesday, Aug. 26 at 6:30 p.m.: 'Why Worry?' (1923) starring Harold Lloyd. Wealthy hypochondriac Harold gets caught up in a south-of-the-border uprising, finding romance along the way. One of Lloyd's wackiest outings; he co-stars with an actual giant. Perfect escapist fun for these worrisome times!