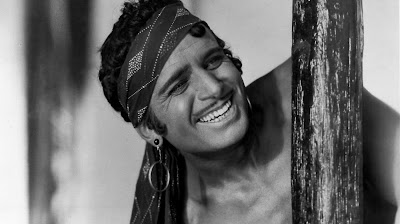 Douglas Fairbanks Sr. to the rescue!

Yesterday's screening of 'The Thief of Bagdad' (1924) was the first for me in nearly four months. How did it go?

The big news was the audience. From what I hear, attendance at reopened theaters has been pretty light: people are wary of Covid-19, and also Hollywood isn't releasing much.

Well, except through streaming. 'Hamilton' should have been a big title for theaters this summer, but Disney went with streaming instead. It's another factor making it more difficult for small theaters to stay in business, even factoring out coronavirus.

So how does Douglas Fairbanks Sr. fare in this environment? Well, pretty darned good, I'd have to say.

About 30 people turned up for yesterday's screening at the Town Hall Theatre in Wilton, N.H. Ordinarily, that would be somewhat disappointing, even for a sunny summer Sunday.

But theater owner/operator Dennis Markaverich told me it was the biggest turnout for anything since the house reopened this month.

Well, that says something about today's cinema: the most popular title so far is a 1924 blockbuster. Hey, I'll take it!

The screening was a success, as really any big Fairbanks picture is really bound to be. Even I have a hard time messing up his great films of the 1920s: almost a century later, they still hold an audience, and they still hold up. 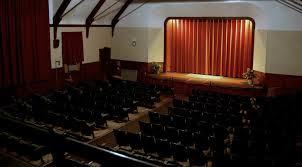 That's one reason the Town Hall Theatre is running a 'Five by Fairbanks' summer series of swashbucklers. If today's Hollywood won't do much to bring people to theaters, then we can at least look to yesterday's hits to get people back into the habit.

Let me say to those concerned about coronavirus: the Town Hall Theater has room for a lot more people, even while limited to half-capacity due to the pandemic per New Hampshire public health guidelines. Thankfully, our state is one of the very few where coronavirus cases continue to decline right now, although that could change if we stop being careful.

So it was a relief to see everyone gladly wearing masks and sitting far enough apart to observe social distancing. Dennis isn't blocking off seats, but it relying on a "laissez faire" approach to social distancing, which for better or worse is kinda the New Hampshire way. (See how we handle seat belts.)

I wore a mask except for when I made opening remarks to the audience, which was seated far enough away, and also when accompanying the film, when I felt the mask got in the way of seeing the keyboard. I really don't think I could accompany in the same way while wearing a mask, as I seem to go stretches without taking a breath, and then take a big one. I don't know, but it would take some getting used to. 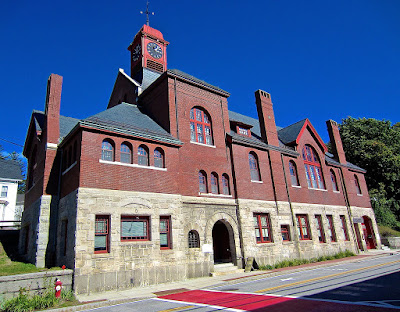 Well, on that topic: Another way yesterday's screening scored a success, I have to say, was with the music.

After a layoff of nearly four months, I wasn't sure how I'd do. All along, I've believed a regular performance schedule was crucial to keeping up fluency in live film accompaniment, at least given my specialized (and limited) musical skills. By "regular" I mean an average of twice a week, and by "performance" I mean in front of actual people while a film is playing, forcing one into a mental state that for me is part of the process.

Well, notwithstanding a little rust here and there, I found film accompaniment to be rather like riding a bicycle. It felt like my last show (Sunday, March 15 at the Somerville Theatre in Boston) was just a few days ago. The only issues were mechanical ones: I just had a few "ciphers" (notes that kept sounding) to deal with, probably due to dust in the keyboard or just lack of use, and also my sustain pedal was squeaky and needs oiling.

Musically, I thought working on pieces such as some Chopin polonaises during the break might give my keyboard playing new depth and insight. Ha! Other than a slightly improved facility with chromatic passages, it was the same old slow-developing me, right back where I left off four months ago.

So for 'Bagdad,' that meant a pseudo-Scheherazadic world of modal scales and melodies with flattened seconds, but everything seemed to hold together as I channeled my inner Rimsky-Korsakov. Afterwards, a concert violinist friend who attended paid me the ultimate compliment: he was so engrossed by the movie that he forgot the music was being made live.

Wow! And this is a guy who studied with Jascha Heifetz!

Speaking of people at screenings: we also had an older gentleman who I'd never seen before. Afterwards, he raised his hand. Working as a delivery boy in New York in the 1950s, he once made a delivery in person to none other than Douglas Fairbanks Jr. He found Doug a nice guy, but didn't respond to my wiseguy question about what kind of a tipper he was.

But that's not all. After the lights came up, I found out that author/screenwriter Alison McMahan was in the audience. She introduced herself, and at first the name didn't click. But she's the author of Alice Guy Blaché: Lost Visionary of the Cinema, among many other projects. 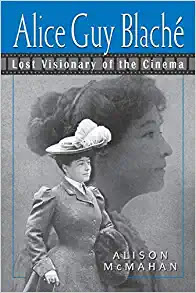 We exchanged a few pleasantries about the recent rediscovery of a lost Blaché's title in a New Hampshire barn, of all places. Turns out she recently moved to Manchester, N.H., again of all places. So another nice surprise to make the acquaintance of her and her husband, whose name escapes me, although after a screening I sometimes can't remember my own name.

But make no mistake: it was Doug Sr. who carried the day at yesterday's screening. Thanks to everyone who ventured out to the Town Hall for yesterday's screening. Reaction was strong and supportive, and our new earlier start time of 2 p.m. provided ample opportunity afterwards to talk and answer questions, even following Doug's 2½-hour epic.

Many other silent film screenings remain cancelled for me, and probably will remain so into 2021. But if you're in the area and need your silent film/live music fix, the Town Hall Theatre is open and has a strong dose waiting for you.

And if nothing else, next month's 'Zorro' should remind everyone to wear a mask!
Posted by Jeff Rapsis at 7:49 AM