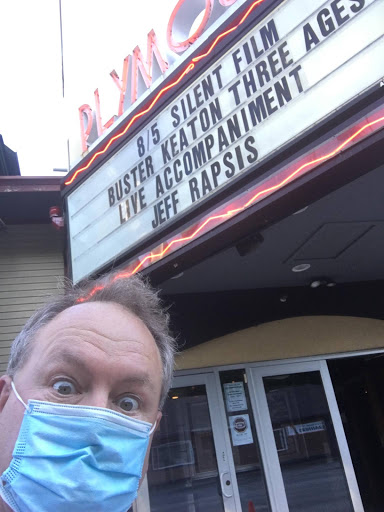 Who is that masked man? He's the accompanist, enjoying the rare sight of his name in lights.
Let me put it this way: last night's screening of Buster Keaton's 'Three Ages' did not run into problems with social distancing.
The screening, which restarted the long-running silent film/live music series at the Flying Monkey Moviehouse in Plymouth, N.H., did not exactly break attendance records.
How many people were on hand? Well, if someone had brought a dozen donuts, there'd more than enough for everyone.
But off we went, working to reestablish the audience for old Hollywood, since new Hollywood doesn't seem to give a damn about small independent theaters these days.
Really! Looks like everything is going direct to streaming from now on. At least that's how the local owner/operators see it. Movie theaters are morphing into a sort of antiquated cultural experience.
In Plymouth, we'll try to build attendance by sticking with comedy (the silent film gateway drug) for our next screening: on Wednesday, Aug. 26, it's Harold Lloyd in 'Why Worry?' (1923). Talk about timely marketing. Can you name a title that's more appropriate for the age we live in today?
And that's just the beginning. At another local venue, we're "leaving the 21st century entirely," as one news report put it.
At the Town Hall Theatre in Wilton, N.H., this coming Sunday marks the beginning of an entire week of silent films with live music, all in the big house and in primetime matinee or evening slots. No first-run films at all.
Instead, we have...well, let give the floor over to the Hippo, our region's arts & entertainment weekly newspaper, which summarized it like this:

At Wilton Town Hall Theatre, first run movies are being put on hold and silent films from the 1920s are taking over the screens. This Sunday, Aug. 9, at 2 p.m., you can catch 1921's Robin Hood and then next week, starting with Buster Keaton in The General from 1926 on Monday, Aug. 10, at 7:30 p.m., catch a series of silent film era comedies (a different one each night through Friday, Aug. 14, at 7:30 p.m.). The movies will all feature live musical accompaniment by Jeff Rapsis (who is also a Hippo associate publisher). Angie Sykeny talks to Jeff on page 6 in this week's issue.

Why, yes, that's me, appearing in a newspaper of which I'm co-owner. And like all good newspapers, we maintain a strict wall between news content and the business/advertising operations. So it's very unusual for me to get featured like this, and I'm grateful for the attention.
You can check out the interview online. Angie S. did a great job making sense of my inchoate ramblings.
But it's funny: the Town Hall Theatre's wholesale abdication of contemporary movies in favor of century-old classics has received a good amount of attention. How about this from BoxOfficePro? Or this from the Monadnock Ledger-Transcript, a local paper?
Well, first up is Douglas Fairbanks Sr. in 'Robin Hood' (1922), which is Sunday, Aug. 9 at 2 p.m. Hope you'll be able to join us in using past greatest to bring current life to an independent theater. Press release with more detail is below. (And more about our week of silent comedy in a later post.)
*  *  * 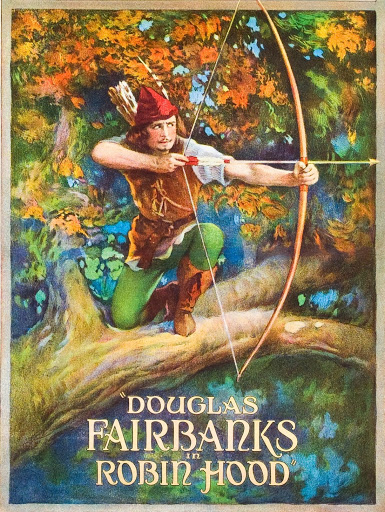 It's off to Sherwood Forest as Douglas Fairbanks summer swashbuckler series continues, with live music

WILTON, N.H.—He robbed from the rich, gave to the poor, which helped make him the top box office attraction of 1922.

He was Douglas Fairbanks Sr. starring in 'Robin Hood,' the original blockbuster movie adaptation of the legendary tale.

It's part of a summer season of silent swashbucklers starring the charismatic Fairbanks, one of early cinema's most popular stars. 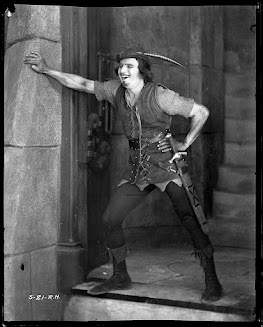 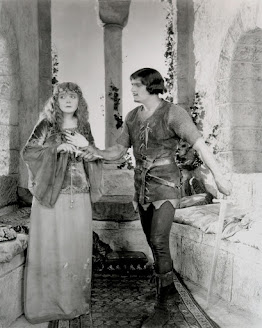 'Robin Hood' continues a summer season of silent swashbucklers at the Town Hall Theatre, all starring Douglas Fairbanks. The series will conclude with a special Saturday/Sunday screening of 'The Mark of Zorro' (1920) and its sequel, 'Don Q, Son of Zorro' (1925) on the last weekend of August:

• Saturday, Aug. 29 at 2 p.m. 'The Mark of Zorro' (1920) starring Douglas Fairbanks, Sr. 100th anniversary of the break-through adventure film where Fairbanks discovered his talent for playing swashbuckling heroes of yore. Still pleasing crowds a century after it first hit theaters!

• Sunday, Aug. 30 at 2 p.m.: 'Don Q, Son of Zorro' (1925) starring Douglas Fairbanks, Sr. Action/adventure sequel to mega-hit 'Zorro' with Fairbanks playing both son and father, and having a ball in both roles. Builds on the original film to create a hugely entertaining swashbuckler that shows how far Hollywood had come in just five years.

For all screenings, accommodations will be made to keep Town Hall Theatre patrons safe in the Covid-19 era. Also, seating will be arranged to observe social distancing and masks will be required inside the theater until patrons are seated.

'Robin Hood' (1922) starring Douglas Fairbanks Sr., will be screened with live music on Sunday, Aug. 9 at 2 p.m. at the Town Hall Theatre, 40 Main St., Wilton, N.H. Admission is free; a donation of $10 per person is suggested to defray expenses.