Out of the concession stand, onto the screen: 'The Three Musketeers' on Sunday, July 26 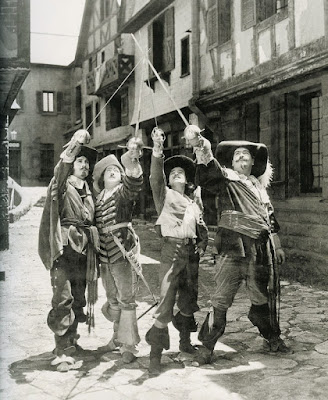 You know how one thing leads to another?

That's how it is with silent film. Creating music for films such as 'The Three Musketeers' has reacquainted me with great books, some of which I read (or pretended to) and some that I completely missed.

I hope you won't miss the silent film version of 'The Three Musketeers' (1921) starring Douglas Fairbanks Sr., which I'm accompanying on Sunday, July 26 at 2 p.m. at the Town Hall Theatre in Wilton, N.H. Complete details are in the press release below.

But really: so many great tales that helped get the movies started were originally in the form of novels from the 19th century or earlier. Just the French authors alone—Alexandre Dumas, Victor Hugo, Gaston Leroux and so many others—formed a deep reservoir of material for the then-brand-new medium of motion pictures.

And now, all these years later, I find it works the other way, too. I've become more interested in some of the big novels of bygone days after creating music for their silent film versions. And sticking again just with French authors, it's quite a roster of titles. 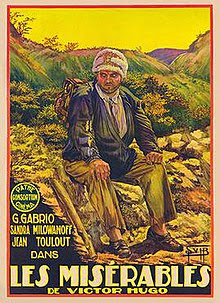 Yes, there is a silent film of Hugo's 'Les Misérables': it's a 1925 French movie that runs six hours. The whole thing survives but recently it's only been screened a few times in Europe. I'd love to get a chance to do music for that: talk about giving yourself up to a different world!

Victor Hugo is a personal favorite, by the way, in part because an obscure religion in Southeast Asia has canonized the French author as one of its prophets. Really! The Vietnam-based faith, called "Cao Dai," emerged in the 1920s and worships Hugo, whose image decorates temples and churches. Seems strange, but it's true.

I know because I've seen it. It's one thing to read about Victor Hugo being the saint of an obscure religious sect. But it's quite another to visit a temple in Vietnam and see it adorned inside and out with painted likenesses of the French author's visage. 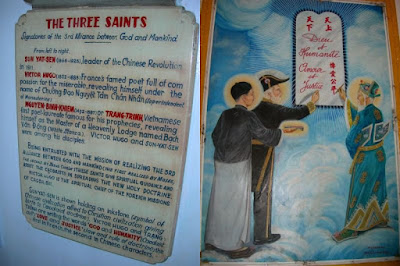 From a Cao Dai temple: Victor Hugo is the one in the admiral's hat.

All of this has inspired me to revisit the books: to go to the source and understand the full extent of the author's vision. And I plan to do that just as soon as cloning technology makes it possible to create multiple versions of myself so I can experience all the literature that's out there.

For those of you rightfully concerned about the coronavirus: at least there's no silent film version of Camus' 'The Plague,' mostly because it wasn't published until 1947.

Still, I hope you'll consider escaping from the 21st century and traveling back with us this Sunday to the 17th with 'The Three Musketeers.' Press release with all the details below, including what I think is one of the best opening lines for a silent movie press release that I've ever come up with. 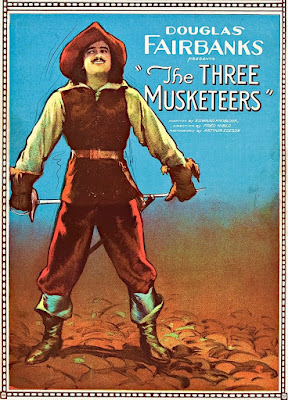 WILTON, N.H.—Long before it became a candy bar in the concession stand, 'The Three Musketeers' was on the big screen as a swashbuckling silent film, a major hit of 1921.

The screening will be accompanied with live music by Jeff Rapsis. It's part of a summer season of silent swashbucklers starring the charismatic Fairbanks, one of early cinema's most popular stars.

'The Three Musketeers,' adapted from the classic Alexandre Dumas novel and directed by Fred Niblo, is a costume drama set amid palace intrigue in 17th century France.

Fairbanks plays the leading role of D'Artagnan, who after challenging musketeers Athos (Leon Barry), Porthos (George Siegmann) and Aramis (Eugene Pallette) to a duel, joins forces with them in opposition of the scheming Cardinal Richelieu (Nigel De Brulier).

With the help of the lovely Constance (Marguerite de la Motte), D'Artagnan and the Musketeers race against time to retrieve the brooch and save their Queen. 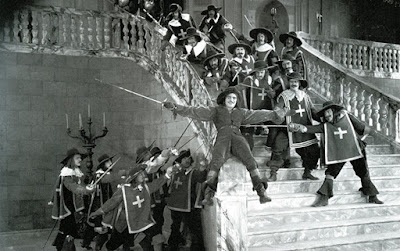 The athletic Fairbanks is at the center of the action in 'The Three Musketeers' (1921).

The athletic Douglas Fairbanks's one-handed handspring to grab a sword during a fight scene in 'The Three Musketeers' is considered as one of the great stunts of early cinema.

Critics point to 'The Three Musketeers' as a turning point in Fairbanks' career.

" 'The Three Musketeers' was the first of the grand Fairbanks costume films, filled with exemplary production values and ornamentation," wrote author Jeffrey Vance in 2008. "With 'The Three Musketeers,' he at last found his metier and crystallized his celebrity and his cinema."

As early as it is, the Fairbanks version of 'Three Musketeers' was not the first big-screen adaptation of the classic Dumas tale. At least a half-dozen earlier versions were filmed in the U.S. and Europe. Over the years, at least 24 different adaptation of the 'Musketeer' saga have been released, attesting to the timeless popularity of Dumas' tale.

Live music for 'The Three Musketeers' will be provided by silent film accompanist Jeff Rapsis, who uses a digital synthesizer to create a traditional full orchestra "movie score" sound.

"These films were designed for the big screen, live music, and large audiences. If you put it all together again, you get a sense of why people first fell in love with the movies," Rapsis said.

'The Three Musketeers' continues a summer season of silent swashbucklers at the Town Hall Theatre, all starring Douglas Fairbanks. The series will be highlighted by a special Saturday/Sunday screening of 'The Mark of Zorro' (1920) and its sequel, 'Don Q, Son of Zorro' (1925) on the last weekend of August:

● Sunday, Aug. 9 at 2 p.m.: 'Robin Hood' (1922) starring Douglas Fairbanks, Sr. Sword-fighting and archery abound as Fairbanks forsakes his noble identity as the Earl of Huntingdon to become Robin Hood, robbing the rich to give to the poor, all the while pursuing the hand of his beloved Lady Marian.

● Saturday, Aug. 29 at 2 p.m. 'The Mark of Zorro' (1920) starring Douglas Fairbanks, Sr. 100th anniversary of the break-through adventure film where Fairbanks discovered his talent for playing swashbuckling heroes of yore. Still pleasing crowds a century after it first hit theaters!

● Sunday, Aug. 30 at 2 p.m.: 'Don Q, Son of Zorro' (1925) starring Douglas Fairbanks, Sr. Action/adventure sequel to mega-hit 'Zorro' with Fairbanks playing both son and father, and having a ball in both roles. Builds on the original film to create a hugely entertaining swashbuckler that shows how far Hollywood had come in just five years.

For all screenings, accommodations will be made to keep Town Hall Theatre patrons safe in the Covid-19 era. Silent film programs will now start at 2 p.m. so the theater can comply with public health guidelines for movie theaters, which recommend ample time between screenings for cleaning and sanitizing.

Also, seating will be arranged to observe social distancing and masks will be required inside the theater until patrons are seated.

'The Three Musketeers' (1921) starring Douglas Fairbanks Sr., will be screened with live music on Sunday, July 26 at 2 p.m. at the Town Hall Theatre, 40 Main St., Wilton, N.H. Admission is free; a donation of $10 per person is suggested to defray expenses.