Yesterday, the Moon and UFO Festival; today, 'Caligari' in Natick, Mass., then 'Wings' in Wilton, N.H. later this week 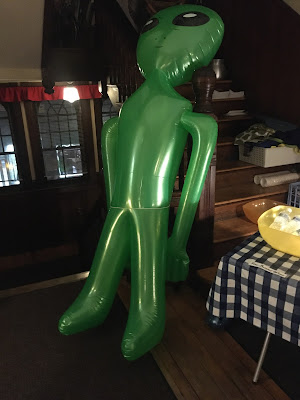 It's not easy being green. For some reason, you just don't fit in.

It's a beautiful Columbus Day weekend here in northern New England. The foliage is at its peak, but there's also spectacular color inside, such as this alien glimpsed as part of the Greater New England UFO Conference in Wilton, N.H. (More on that below.)

I haven't promoted this one heavily because the Center, like all venues in Massachusetts, is limited to just 25 people due to Covid-19 restrictions. But if you'd like to go, check www.natickarts.org, as tickets are available only online and in advance.

But then we swing back to New Hampshire later this week with a screening of the epic World War I picture 'Wings' (1927) on Thursday, Oct. 15. Showtime is 7:30 p.m. at the Town Hall Theatre in Wilton, N.H., and it's the opening title in a three-day festival of classics brought to you by the Aviation Museum of N.H.

More on 'Wings' and the festival below. Before that, let's tackle the alien. (Not literally, as he may have a raygun, or be sticky.) He/she/it was spotted in the Town Hall Theatre lobby as part of, yes, the Greater New England UFO Conference, which is taking place this weekend.

In fact, it's still going on today: Sunday, Oct. 11. So there's still time to check it out if you're within driving or bicycling distance to Wilton, N.H. Among other attractions, the theater is enforcing social distancing by placing blow-up aliens (similar to the one above) in selected seats.

As an incentive, it's also a confab of "Big Foot" fans, one of whom can make plaster casts for you to take home: 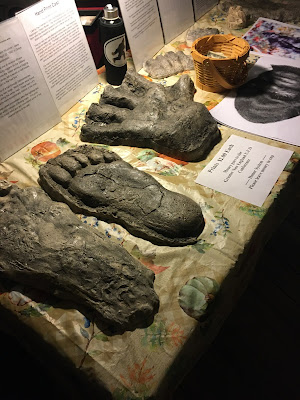 I wish to apologize to all Bigfoot fans, plus the Native American community in general, for mistakenly referring to Big Foot in my opening remarks as "Sacajawea" instead of "Sasquatch." Wow, I'm turning into my malaprop-prone mother. God rest her soul. (Apologies to her, too, by the way. Just because.)

Anyway: I love doing music for Lang's 'Frau im Mond' (the original German title) because it's such a surprise for audiences, and also because the whole story and treatment are a good fit for the kind of music I make: that of the big gesture.

Things always start off with a bang due to a flashback near the beginning: Prof. Manfeldt is seen more than three decades earlier, lecturing on his "gold on the moon" theory to fellow academics, who promptly riot. Lang then shows close-ups of a bell being rung and a whistle being blown to quell the fracas: literally, bells and whistles!

And that's what I use: my grandmother's old brass school bell, and a referee's whistle, to kick up a nice sonic riot to go with Lang's visuals. And it's really effective, I think, especially when the flashback ends and Lang dissolves back to Prof. Manfeldt, now impoverished and living in a garret: all the noise dies down and I just leave soft high note sustained, hanging there.

When I accompany 'Woman in the Moon,' the entire score is built out of original motifs for characters and situations. You need material to hold together a nearly three-hour film. But also, in just one instance, I use an identifiable tune that I think helps the film's emotional line.

The tune: 'Gaudeamus igitur,' the classic student anthem. I work it in during Manfeldt's flashback lecture to establish atmosphere, and then we don't hear it again until much later, when he reaches the moon and actually finds, yes, GOLD!

Lang illustrates the moment visually by showing the Professor's shouts echoing among the lunar caverns, and I add a note of musical triumph by folding in the chords to 'Gaudeamus' on top of the by-then-rhythmic accompaniment in the bass.

Lot of interesting comments from the 30 or so people who attended the screening. One I'd never heard before: "NASA could use you to add drama to their launches."

By the way, I mentioned bicycling because after yesterday's trip to the moon, I got on my trusty road bike and pedaled a late afternoon loop from the theater into the hills of bucolic Lyndeborough, N.H. (Pronounced "line-boro" for all you flatlanders.)

And I mean hills. It was all up, up, up to what's called "Lyndeborough Center," with its meetinghouse and parsonage and open fields and views for miles. And then, as dusk gathered, I enjoyed my own rocket ship ride down the road to a place called "Fitch's Corner" in Milford, then back to the theater.

Distance was only about 15 miles, but the uphills made for slow going, while the downhills couldn't be taken advantage of entirely because it was getting dark and you have to be careful on these back roads.

But the air was still warm, even in the growing twilight, so it made for a spectacular communion with this year's foliage, which will be gone soon enough.

Okay, here's more info about 'Wings' on Thursday and the other classic aviation films we're showing later this week. See you at the theater! 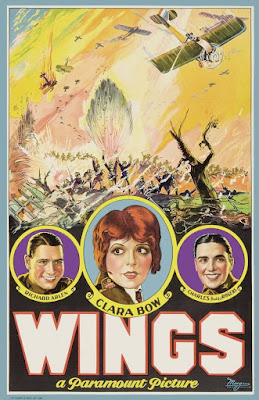 'Wings' to be screened with live music on Thursday, Oct. 15 at the Town Hall Theatre.

WILTON, N.H.—Fly off to high-altitude adventure with a festival of classic aviation films at the Town Hall Theatre, 40 Main St., Wilton, N.H.

The three-day event, which runs from Thursday, Oct. 15 through Saturday, Oct. 17, gives local audiences a chance to see timeless aviation movies as they were intended—on the big screen and in a theater.

The festival will include four large-scale features from Hollywood's Golden Age, ranging from the classic World War I aviation drama 'Wings' (1927) to the all-star wide-screen desert survival blockbuster 'The Flight of the Phoenix' (1965).

Other titles include '12 O'Clock High' (1949), an intense thriller about U.S. pilots in World War II, and 'The High and the Mighty' (1954), a ground-breaking airborne drama about a stricken commercial airliner starring John Wayne.

All films in the festival were nominated for multiple Academy Awards. Each captures the public's fascination with flight in a different setting, as pilots and passengers alike face danger in the sky and also on the ground. Aviation buffs will enjoy the vintage aircraft featured in each production.

All screenings are free and open to the public. Donations will be accepted, with all proceeds used to support the education outreach program of the Aviation Museum of N.H.

• On Thursday, Oct. 15 at 7:30 p.m., the festival opens with the silent classic 'Wings' (1927), a drama about World War I aviation that won 'Best Picture' at the very first Academy Awards ceremony. The film stars Clara Bow, Charles 'Buddy' Rogers, and Richard Arlen. Live music for 'Wings' will be provided by Jeff Rapsis, a silent film accompanist and also executive director of the Aviation Museum of New Hampshire. 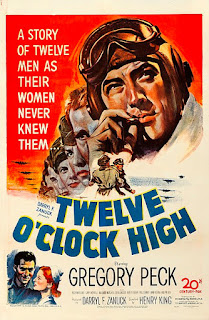 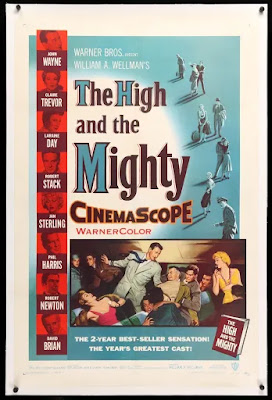 • Saturday, Oct. 17 at 2 p.m., it's 'The High and the Mighty' (1954), a drama about a troubled commercial flight starring John Wayne and Robert Stack. With its intertwined stories of passengers on a doomed commercial flight, 'The High and the Mighty' served as a template for the Hollywood 'disaster' genre. The film earned six Academy Award nominations, winning for composer Dmitri Tiomkin's dramatic musical score. 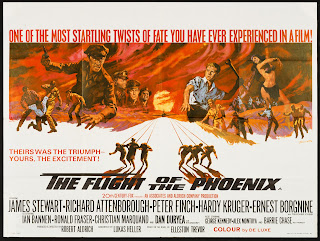 "These are all terrific pictures with great stories set in the earlier days of aviation, before air travel became commonplace for so many people," said Jeff Rapsis, the Aviation Museum's executive director.

"They're a great way to recapture the romance and excitement of flight, and the Aviation Museum's festival is a rare chance to see them as intended: on a big screen and in a movie theater," Rapsis said.

The Aviation Museum of N.H., located at 27 Navigator Road, Londonderry, N.H., is a non-profit 501(c)3 tax-exempt organization. Housed in the vintage 1937 passenger terminal at Manchester-Boston Regional Airport, the Aviation Museum is dedicated to preserving the Granite State's rich aviation past, and also inspiring today's students to become the aviation pioneers of tomorrow.

For more about the Town Hall Theatre, visit www.wiltontownhalltheatre.com or call (603) 654-3456.