Tonight! Final round of 'The Storytellers' with Buster Keaton starring in 'The Saphead' (1920) 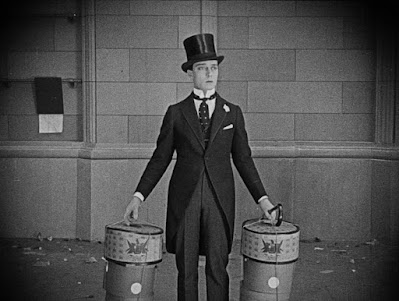 Buster returns from the millinery in 'The Saphead' (1920).

Hi everyone! I feel like I'm reporting from between rounds in a title fight going the distance.

We're nearly through our week-long 'Story Tellers' series at the Town Hall Theatre in Wilton, N.H.

And it's been an endurance test because three of the pictures are each about three hours: on Tuesday, it was Griffith's 'Intolerance' (1916); an Wednesday, it was Lang's 'The Spiders' (1919), and last night it was another three-hour Griffith, 'Way Down East' (1920).

So today I feel like I'm entering the later stages of a 12-round bout with Rocky Graziano. But like Jake LaMotta, I'll take the hits and intend to keep on coming.

Fortunately, tonight we finish with 'The Saphead' (1920), a much lighter (and shorter!) movie from 1920 that has the distinction of being the first starring feature role of a very young Buster Keaton.

I included 'The Saphead' as a kind of dessert to the series, and also because it's a good example of how many early full-length pictures were stories adapted from the stage.

In this case, it was a Wall Street comedy called 'The New Henrietta' that originally starred Douglas Fairbanks Sr. when produced on stage in 1913. Fairbanks also starred in an earlier film version, 'The Lamb' (1915). 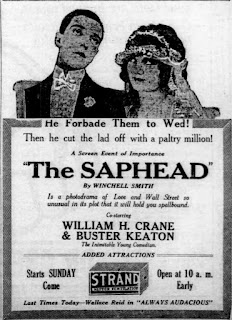 But when it was time for a remake retitled 'The Saphead,' Fairbanks wasn't available. To take his role, he suggested Buster Keaton, who until that time had been Fatty Arbuckle's understudy in slapstick mayhem.

Buster turned in a superbly understated performance, quite different from his over-the-top physical comedy antics with Arbuckle. It marked the real start of his career as an independent performer, which would lead to his series of starring features in the 1920s.

Because it's not an official "Keaton" film, however, it's not screened as often as the others. So here's your chance to see it as intended—on the big screen, with live music, and with an audience.