We all could use a laugh about now. Soooo... Buster Keaton to the rescue on Sunday, 1/10 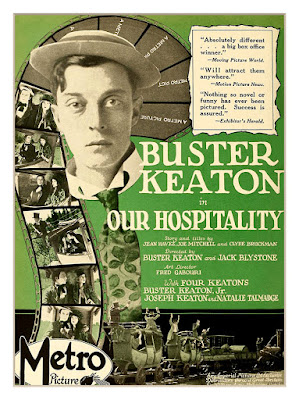 Original poster art for 'Our Hospitality' (1923).
Considering the news this week, I'm glad this weekend's silent film program is a comedy. At this point, we could all use a laugh.

And what a comedy! It's Buster Keaton's great family feud feature 'Our Hospitality' (1923), which I'm accompanying on Sunday, Jan. 10 at 2 p.m. at the Town Hall Theater in Wilton, N.H.

An incredible film by any measure, 'Our Hospitality' is even more astonishing when you consider it was Keaton's first attempt to create a full-length motion picture spotlighting his character and his style of comedy.

Prior to this, Keaton was turning out short comedies with one emphasis: gags, gag, and more gags. Anything for a laugh! Story and character were often incidental, if present at all.

But all that changed with 'Our Hospitality.' Keaton, who never went to film school (because there weren't any then), instinctively knew he had to take a completely different approach to create a longer movie that would hold an audience for more than an hour.

More story, characters with real relationships, and a compelling setting. 'Our Hospitality' has all of this.

Keaton further pushed the envelope by making it a period piece: the story takes place in the 1830s, with appropriate costumes and settings and props.

And yet he still got laughs—perhaps deeper, most satisfying laughs because the humor was often driven by the characters and their relationships, as well as the authentic period ambiance.

Perhaps most surprising: the picture opens with a prologue that's deadly serious. Pretty daring for a comedian making his first feature film! But Keaton and his team understood that by setting the table this way, the comedy feast to come would prove all the more tastier.

Wow—can you tell I skipped dinner this evening? 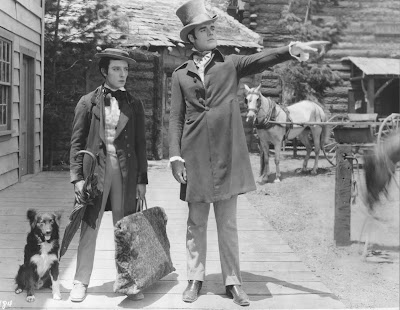 Buster Keaton is shown the way in 'Our Hospitality.'

A lot more about Sunday's screening is in the press release pasted in below. But I hope you'll join us as we kick off another year of silent film with live music at the Town Hall Theatre.

As an added attraction, we're also running Chapter 1 of 'Officer 444,' a serialized police drama released in 1926 in 10 thrilling installments.

The serial was produced by "Goodwill Pictures," and apparently the name "Goodwill" had the same connotations then as new,  meaning bargain basement.

Thenceforth, each silent film program at the Town Hall Theatre will open with another exciting episode of "Officer 444." At the rate of two shows per month, we'll get to the grand finale around Memorial Day, provided the theater stays open.

And before sending you to press release land, let me plug 'The Storytellers.' It's a week-long series of silent features with live music (because I'm a masochist) starting Monday, Jan. 11.

Each night that week, we'll explore a different silent feature chosen for its ability to keep an audience on the edge of its seat, with live music from me.

For now, hope to see you at Sunday's screening of 'Our Hospitality.' Buster may never smile on screen, but his timeless routines sure prompt a lot of laughter in the theater. 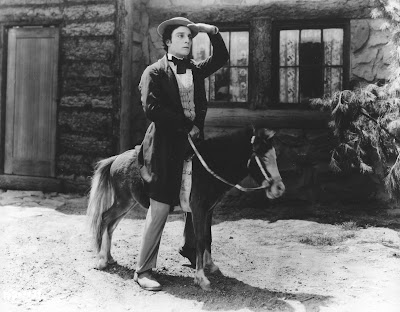 Buster Keaton stars in 'Our Hospitality' on Sunday, Jan. 10 at Town Hall Theatre

WILTON, N.H.—He never smiled on camera, earning him the nickname of "the Great Stone Face."

See for yourself with a screening of 'Our Hospitality' (1923), one of Keaton's landmark features, at the Town Hall Theatre on Sunday, Jan. 10 at 2 p.m.

The screening will be accompanied by live music by Jeff Rapsis, a New Hampshire-based silent film musician.

Admission is free; a donation of $10 per person is suggested to support the Town Hall Theatre's silent film series.

Highlights of the picture include Keaton's extended journey on a vintage train of the era, as well as a climatic river rescue scene. 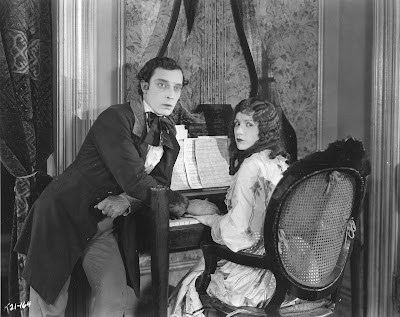 Keaton in 'Our Hospitality' with his wife, Natalie Talmadge.

'Our Hospitality' is part of the Town Hall Theatre's silent film series, which aims to show early movies as they were meant to be seen—in high quality prints, on a large screen, with live music, and with an audience.

"All those elements are important parts of the silent film experience," said Rapsis, who will improvise a musical score for 'Our Hospitality.'

"Recreate those conditions, and the classics of early Hollywood leap back to life," he said.

The show also includes Chapter 1 of "Officer 444" (1926), a weekly serial in which Officer 444 pursues "The Frog," a criminal mastermind with plans to take over the world. Subsequent chapters will be shown at future Town Hall Theatre silent film screenings.

Keaton, along with Charlie Chaplin and Harold Lloyd, stands today as one of the silent screen's three great clowns. Some critics regard him as the best of all; Roger Ebert wrote in 2002 that "in an extraordinary period from 1920 to 1929, (Keaton) worked without interruption on a series of films that make him, arguably, the greatest actor-director in the history of the movies."

Keaton entered films in 1917 and was quickly fascinated with them. After apprenticing with popular comedian Roscoe "Fatty" Arbuckle, Keaton went on to set up his own studio in 1920, making short comedies that established him as one of the era's leading talents.

A remarkable pantomime artist, Keaton naturally used his whole body to communicate emotions from sadness to surprise. And in an era with no special effects, Keaton's acrobatic talents enabled him to perform all his own stunts.

In 1923, Keaton made the leap into full-length films with 'Our Hospitality,' which proved popular enough for him to continue making features for the rest of the silent era.

Although not all of Keaton's films were box office successes, critics later expressed astonishment at the sudden leap Keaton made from short comedies to the complex story and technical demands required for full-length features.