Next week: 'The Storytellers,' five days of film that pioneered the full-length motion picture 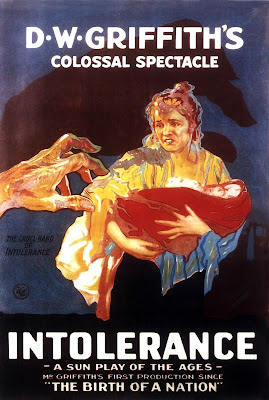 I've known of D.W. Griffith as 'The Father of Film' since at least the 1970s, when I'd eagerly await my monthly Blackhawk Films catalog in the mail.

But for many years, I just didn't understand his work. The films—either the short dramas for Biograph, or the longer features—either weren't interesting, or left me cold.

Okay, I thought: Griffith is the father of film. But as a teenager, I'd rather run my Super-8 print of Keaton's 'Cops' (1922) for the 80th time rather than sit through 'Way Down East' (1920), the legendary Griffith melodrama. (That's Lillian Gish on the ice floes below, at the climax of 'Way Down East.') 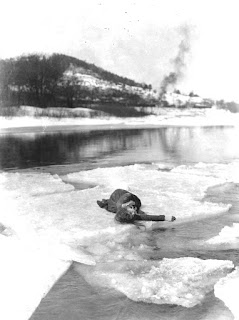 My first sense of what I was missing, however, came thanks to the Kansas Silent Film Festival, which I began attending back in 2000. Every year, they'd run at least one Griffith title (usually one of the Biograph shorts) in honor of his role as an industry pioneer.

So I got to see some of Griffith's work on the big screen, with an audience, and with live music—in other words, the way it was intended to be shown. And I found that under those circumstances, the Griffith films had a certain elemental quality that I hadn't picked up on until then.

By elemental, I mean they could hold a crowd. Through simple, basic stories, they got your attention quickly, and then held it.

Later, when I began accompanying silent film programs, I found a curious thing: the Griffith films—even the famous ones regarding as classics—seemed really lame when viewed in isolation to prepare for a screening.

But in front of an audience in a theater, they leaped to life. People would hoot and holler at what they saw. They'd stamp their feet, totally engaged in what they were seeing unfold in front of them.

As I learned more about Griffith's background and career, I realized what as going on. Griffith was the father of film, yes, but not for technical innovations such as close-ups and such. It was because of his ability to lay out a story to get an audience's attention right away, and then keep them on the edge of their seats.

That, as demonstrated more or less throughout his work, I feel was Griffith's most valuable contribution to cinema. He showed how full-length feature films could hold an audience's attention throughout an entire evening-long narrative journey.

And he did it so well that the films still work today, if you can show them as intended. 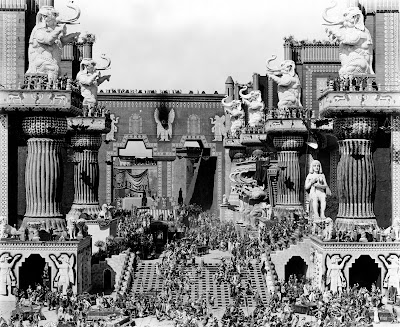 I remember once when we ran 'Birth of a Nation' (1915), Griffith's incredibly racist blockbuster set in post-Civil War America. The film climaxes with the Ku Klux Klan riding to the rescue,  and I remember of friend of mine saying afterwards, "You're like, 'Yes, ride to the rescue,' and then 'But no, it's the Klan!' " Such was (and is) the elemental narrative power of Griffith's tales.

Of course this is evident only if one experiences the films as intended, of which there are precious few opportunities these days. But not next week, when the Town Hall Theatre in Wilton, N.H. presents 'The Storytellers,' a five-day festival of early films that still keep audiences on the edge of their seats.

For details, check out this info sheet for the series.

Or you can peruse the press release below. Either way, I hope you'll join us for some or all of the series. It's a rare chance to see some terrific cinema that still holds up well if you experience it as intended—in a theater, with live music, and with an audience. 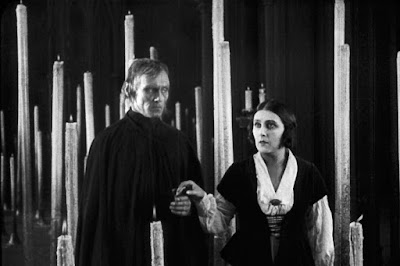 In early cinema, a talent for story-telling was a key factor in popularizing feature-length movies.

Pioneering directors such as D.W. Griffith in the U.S. and Fritz Lang in Germany helped transform the motion picture from a sideshow novelty into a major art form—and a big business.

See for yourself when the Town Hall Theatre presents a week-long series, 'The Storytellers,' designed to highlight filmmakers who told tales that kept early movie-goers coming back for more.

With programs every evening from Monday, Jan. 11 to Friday, Jan. 15, 'The Storytellers' will showcase five spectacular full-length movies that helped build the audience for feature films.

Although produced in Germany, the Lang films will be shown with titles translated into English. 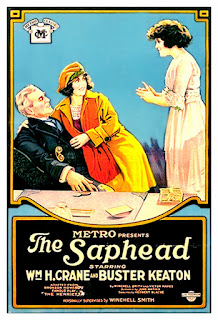 The series finishes with Wall Street comedy 'The Saphead' (1920), the first feature-length film starring Buster Keaton. (There's a poster at right, although without Buster in it.)

All shows in 'The Storytellers' begin each night at 7:30 p.m. Each screening will be accompanied by live music by Jeff Rapsis, a New Hampshire-based silent film musician.

Admission is free; a donation of $10 per person is suggested to support the Town Hall Theatre's silent film series.

The Town Hall Theatre ordinarily programs the latest first-run feature films. But the ongoing pandemic, plus Hollywood's resistance to releasing new material to theaters, has prompted the highly regarded venue to focus on alternative programming.

The aim of 'The Storytellers' is to highlight a factor in the rapid growth of the movie business that's often overlooked: the power of the narrative.

Early directors such as D.W. Griffith and Fritz Lang are often noted for their technical innovations or sense of visual design, which helped establish the basic grammar of cinema.

But another major factor in audiences returning for more was the story itself.

"In early cinema, the best directors had a knack for laying out a story that could keep people on their edges of their seats for an entire evening," Rapsis said.
"Up until the mid 1910s, most movies were 10 or 20 minutes long," Rapsis said. "Griffith and Lang were among the directors who led the way to feature-length films, and their stories were the foundation of their success."

'The Storytellers' aims to highlight this enduring quality of the tales that brought cinema from a carnival sideshow attraction to an art form that would dominate the 20th century. 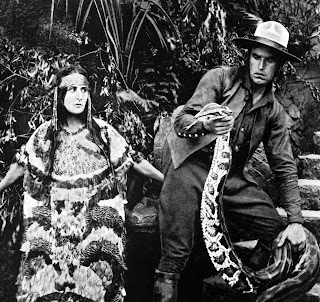 A scene from Fritz Lang's action-adventure 'The Spiders' (1919).

"The films were so well built with audience reaction in mind that they still work when shown as intended: on the big screen, with live music, and in a darkened theatre with other people joining in a shared experience," Rapsis said.

Among early directors, Griffith was uniquely positioned to understand how to engage an audience for an evening of story-telling.

Prior to his motion picture work, Griffith spent two decades directing stage melodramas in small towns across the U.S., where keeping an audience occupied was an essential skill.

"In Griffith's stage experience, if you didn't hook the crowd right away, and keep them hooked, they'd throw things at you—or worse," Rapsis said.

This experience honed his story-telling skills, which became essential when creating movies in studios where no audience was present during the filming and editing.

"Griffith knew in his bones how large crowds would react to a story, and built that into his most popular films," Rapsis said.

"His ability to hold an audience was based on a profound understanding of human nature, and how people react, especially when part of a crowd," Rapsis said. "Because of this, his films still work today when presented as intended, which we'll do at the Town Hall Theatre."

Lang exploited a similar knack for story-telling to expand the scope of full-length movies in his native Germany.

Lang was among the first to exploit the ability of cinema to take viewers to exotic places or to travel in time. This helped him craft stories that showed early audiences the power of cinema. 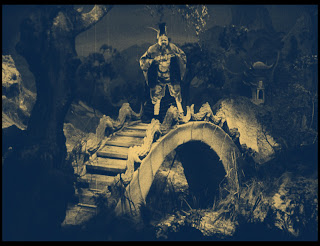 'The Storytellers' will focus on five early feature films. It's a rare chance to experience them as intended: on the big screen, with live music, and in a darkened theater with an audience present:

• Monday, Jan. 11 at 7:30 p.m.: Fritz Lang's 'Destiny' (1921). Years before his classic 'Metropolis,' German director Fritz Lang brought this ground-breaking expressionist fantasy to the big screen. It's a powerful tale in which human lives are each represented by a candle, and a figure representing 'Death' grants a woman three chances to rescue her lover from a premature demise.

• Wednesday, Jan. 13 at 7:30 p.m.: Fritz Lang's 'Spiders' (1919). Early Lang opus that anticipates Indiana Jones by three generations. An intrepid explorer looking for an Incan diamond must stay ahead of a criminal syndicate known as 'The Spiders,' which seeks it for nefarious purposes. 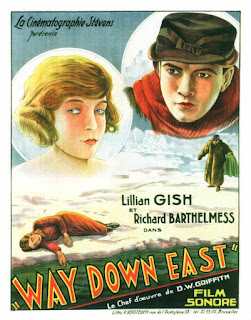 • Thursday, Jan. 14 at 7:30 p.m.: Griffith's 'Way Down East' (1920). One of the most popular films of the silent era features Lillian Gish as a wronged woman in old-time New England who can't escape her past. Still-thrilling climax on ice floes heading towards the falls was filmed on location on the Connecticut River.

• Friday, Jan. 15 at 7:30 p.m.: Buster Keaton in 'The Saphead' (1920). Buster Keaton's debut in a feature-length picture, although not a Keaton film. Rather, a stage adaptation in which the comedian was hired to play a role originated by Douglas Fairbanks Sr. A rare chance to see this seldom-screened landmark picture on the big screen.

The Town Hall Theatre continues to observe procedures to comply with all state and CDC public health guidelines, including reduced seating capacity.

'The Storytellers,' a five-day series of early motion pictures from directors D.W. Griffith and Fritz Lang, will run from Monday, Jan. 11 through Friday, Jan. 15 at the Town Hall Theatre, 40 Main St., Wilton, N.H. Screenings start at 7:30 p.m.; live music will accompany each film. Admission is free; a donation of $10 per person is suggested to support the Town Hall Theatre's silent film series.