Benefit screening of 'Wings' (1927) to land at Manchester's Rex Theatre on Tuesday, Oct. 5 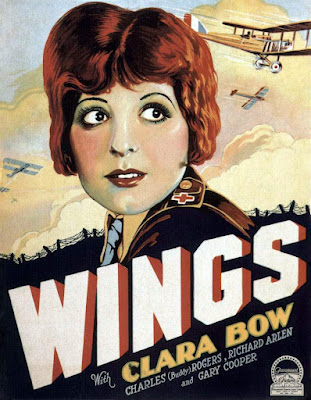 Creating music for silent films is separate from my "day job," which is managing a local non-profit organization.

In that light, I'm a big admirer of the composer Charles Ives (pictured below, at left). A century ago, he worked full-time as partner in a very successful insurance business, while continuing his musical activities on the side.

It was a choice he made early in life, recognizing that his at-times bizarre avant garde compositions were never going to provide an income. And he didn't want his family to "starve on his dissonances," as he said.

However, Ives saw advantages in this double life. He claimed his work in business helped his art, and his work in art helped his business. I subscribe to that outlook, which I've found to be true for me as well.

And the two lives aren't always separate. Occasionally, they overlap. In the case of Ives, he would sometimes try to supply music for insurance industry events, often with mixed results. After all, he wasn't about to write music like the State Farm Insurance "Like a Good Neighbor" jingle, which was actually composed by...Barry Manilow!

(Manilow, by the way, also composed the "Stuck on Band-Aid" jingle, and, most famously, "You Deserve a Break Today" for McDonalds, but that's is a whole other topic.)

And every now and then, my own two lives collide—such as on Tuesday, Oct. 5, when I'll provide live music for a screening of 'Wings' (1927) to benefit the Aviation Museum of N.H., where I'm executive director. (That's the non-profit I manage.)

For me, it's a nice coincidence that aviation and the movies grew up at roughly the same time, during the first decades of the 20th century. Early cinema is filled with flying stories, especially following Lindbergh's 1927 solo journey across the Atlantic.

So there's a lot of synergy. Over the years, I've done several aviation-themed silent film programs in support of the museum or other organizations. As the first 'Best Picture' in Academy Award history, 'Wings' is far and away the favorite title.

But other titles include the Al Wilson stunt picture 'The Phantom Flyer' (1928), an airborne melodrama titled 'The Sky Rider' (1928) starring Champion the Dog, and the goofy Monty Banks feature-length comedy 'Flying Luck' (1927).

Ironically, Ives himself was no fan of either airplanes or the movies. He would famously shake his fist at airplanes that flew overhead, intruding on the rural quiet of his native Connecticut. And he felt movies were a form of dissipation that weakened the collective American spirit.

Well, even if Ives might not approve, 'Wings' is on the bill next Tuesday. If you're in the Manchester area, I invite you to join us. If you've never had a chance to see this picture on the big screen, and with live music, and with an audience—well, it's a flight you don't want to miss.

More details in the press release below. Hope to see you for an on-time departure on Tuesday, Oct. 5 at  p.m. 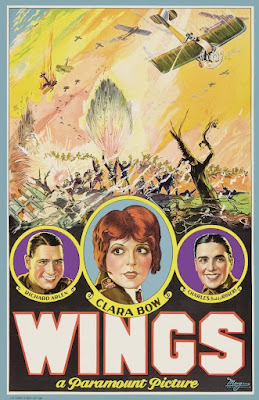 'Wings,' a blockbuster hit in its original release, recounts the adventures of U.S. pilots flying combat missions behind enemy lines at the height of World War I in Europe. 'Wings' stunned audiences with aerial dogfight footage, vivid and realistic battle scenes, and dramatic love-triangle plot. 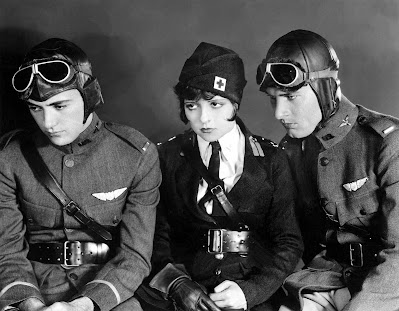 " 'Wings' is not only a terrific movie, but seeing it on the big screen is also a great chance to appreciate what earlier generations of servicemen and women endured," accompanist Jeff Rapsis said.

"It's a war that has faded somewhat from our collective consciousness, but it defined life in the United States for a big chunk of the 20th century. This film captures how World War I affected the nation, and also shows in detail what it was like to serve one's country a century ago."

Rapsis is executive director of the Aviation Museum of N.H., which is co-sponsoring the screening.

'Wings' will be followed on Wednesday, Oct. 6 with "The McConnell Story" (1955), a Warner Bros. dramatization of the life and career of N.H. native Joseph C. McConnell, a U.S. Air Force pilot who became the top American ace during the Korean War.

'Wings' runs about 2½ hours. The film is a family-friendly drama but not suitable for very young children due to its length and intense wartime battle scenes.