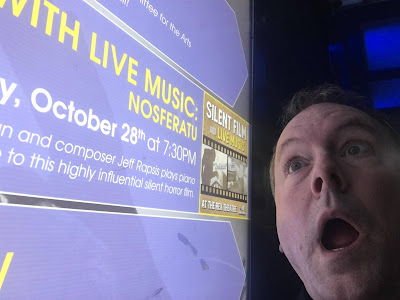 Me outside the Rex Theatre last night in downtown Manchester, N.H.

Last night's screening of 'Nosferatu' (1922) drew about 150 people to the Rex Theater in downtown Manchester. Thanks for everyone (including volunteers and staff at the Rex) for all collaborating on what turned out to be a spooky good time!

But if there's no rest for the wicked, then I must have done something really bad.

Tonight marks the start of a three-day mini-marathon of rarely shown silent thrillers starring Lon Chaney, even while I'm doing 'Nosferatu' again on Saturday night in Maine and then 'Dracula' at the Somerville Theatre on Sunday.

The mini-marathon is the culmination of a two-month series of films directed by Tod Browning, most famous for Bela Lugosi's 'Dracula' (1931) and the cult classic 'Freaks' (1932).

But before that, Browning made a number of very strange silent-era movies, many of them starring Chaney. And that's what we'll be seeing this weekend at the Town Hall Theater in glamorous downtown Wilton, N.H.

Tonight (Friday, Oct. 29) it's 'The Blackbird' (1926), in which Chaney plays two roles: a criminal mastermind of London's underworld, and also "The Bishop," his pious but deformed brother.

The show starts at 7:30 p.m.; more details are in the press release below.

And if you think that sounds strange—well, we're just warming up. 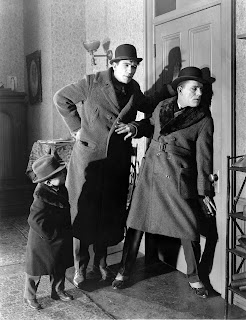 On Saturday at 2 p.m., how about 'The Unholy Three' (1925), which stars Chaney (at left) as a sideshow ventriloquist who teams up with a circus midget, a strong man, and a gorilla to create an elaborate criminal syndicate fronted by a pet shop.

Yes, ventriloquism in silent film. It's kind of like Edgar Bergen and Charlie McCarthy on the radio.

But I'm really looking forward to it. When you're celebrating Halloween by accompanying nine silent film shows in seven days, reality begins to blur and anything seems possible.

'The Unholy Three' is paired with 'Outside the Law' (1920), an early Browning crime drama that pairs Chaney with actress Priscilla Dean.

We'll round things out on Sunday at 2 p.m. with 'Where East is East' (1929), a late Browning/Chaney collaboration and one of the last films Chaney appeared in before his untimely death in 1930.

Hope you can make some or all of the screenings in this spooky smorgasbord. As promised, more info in the press release below. 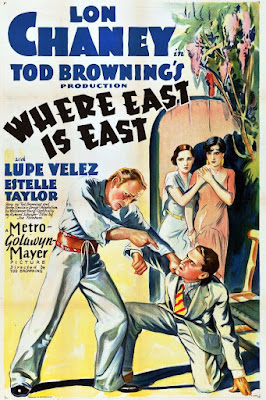 Three days of rarely screened silent film classics with live music, all starring the 'Man of a Thousand Faces'

WILTON, N.H.—He's best known for his iconic leading roles in such classics as 'The Phantom of the Opera' (1925) and 'The Hunchback of Notre Dame' (1923).
But versatile actor Lon Chaney, known as 'The Man of a Thousand Faces,' starred in dozens of other ghoulish thrillers at the peak of the silent film era in the 1920s.
Four of these rarely screened pictures will be shown with live music during a three-day Lon Chaney mini-marathon over Halloween weekend at the Town Hall Theatre, 40 Main St., Wilton, N.H.
The screenings are free and open to the public; a donation of $10 per person is suggested to support the Town Hall Theatre's silent film programming.

All screenings will feature live music by silent film accompanist Jeff Rapsis.
• The mini-marathon opens on Friday, Oct. 29 at 7:30 p.m. with 'The Blackbird' (1926), a bizarre melodrama in which Chaney leads a double life as a criminal mastermind of the London slums and also "The Bishop," his pious but deformed brother. Will the entrance of a new woman expose his secret?
• On Saturday, Oct. 30 at 2 p.m., it's a twisted Halloween Weekend Double Feature. 'Outside the Law' (1920) features Chaney as a gangster who frames a former rival and turns his young daughter to a life of crime. In 'The Unholy Three' (1925) Chaney is a criminal ventriloquist who runs a pet store that fronts a daring scheme for fleecing wealthy customers.

• The series concludes on Sunday, Oct. 31 at 2 p.m.with 'Where East is East' (1929) featuring Chaney as "Tiger Haynes," a jaded animal trapper in the jungles of Laos, who cares only for his young daughter, Toyo. The daughter plans to marry a circus owner's son, but the couple's happiness is threatened by the appearance of a mysterious woman.
All four films were directed by Tod Browning, a frequent Chaney collaborator best known for helming the original 'Dracula' (1931) starring Bela Lugosi and the early cult classic 'Freaks' (1932), a horror film featuring handicapped circus performers.
The four Chaney films are part of an ongoing retrospective at the Town Hall Theatre highlighting Browning's early work. 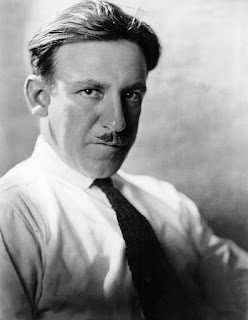 Browning (at left) specialized in twisted melodramas, gritty crime thrillers, and bizarre stories that drew on his own background as a carnival sideshow entertainer—themes that are on display throughout the Chaney mini-marathon.
Unlike Chaney's iconic performance in the lead role of 'Phantom of the Opera,' many of the Browning films feature Chaney without heavy makeup.
The roles, however, are as demanding as any that Chaney tackled, and show the actor's immense range as a performer.
"These early Tod Browning pictures starring Lon Chaney are great for Halloween because of the ghoulish ideas that drive them," Rapsis said. "When shown in a theater with live music and an audience, they really come to life, which is also in spirit of Halloween."
The Town Hall Theatre's three-day Halloween weekend Lon Chaney mini-marathon opens on Friday, Oct. 29 at 7:30 p.m. with 'The Blackbird' (1926); followed on Saturday, Oct. 30 at 2 p.m. with 'Outside the Law' (1920) and 'The Unholy Three' (1925); and concludes on Sunday, Oct. 31 at 2 p.m. with 'Where East is East' (1929).
Live music for all screenings will be provided by silent film accompanist Jeff Rapsis.
Admission is free to all screenings, with a suggested donation of $10 per person. The Town Hall Theatre is located at 40 Main St., Wilton, N.H.; for more information, call (603) 654-3456 or visit www.wiltontownhalltheatre.com.