Unseen for a century: 'Straight is the Way' with live music on Thursday, 12/9 in Concord, N.H. 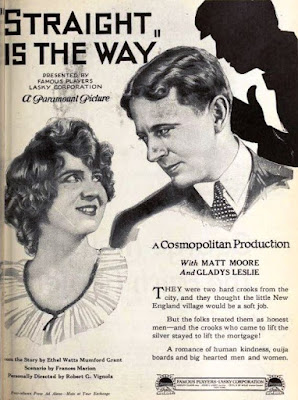 A vintage print ad promoting 'Straight is the Way' for its 1921 release.

I'm thrilled to be doing live music for upcoming screenings of 'Straight is the Way,' a comedy/drama released in 1921 and not seen in theaters for a full century.

For details about the screenings, check out the full press release pasted in below.

Why stage the premiere in New Hampshire? Because 'Straight is the Way' is set in fictional 'Hampton Center, N.H.' (It was apparently shot, however, just outside New York City.)

And why now? Because after languishing in obscurity for 100 years, the sole surviving print of 'Straight is the Way' was recently transferred to digital media and is now available.

The transfer was accomplished thanks to a successful crowd-funding effort (which I donated to) this summer led by Ed Lorusso, a Maine-based film buff. Ed has organized many such transfers of vintage films that survive in fragile one-of-a-kind film prints that otherwise wouldn't get shown. 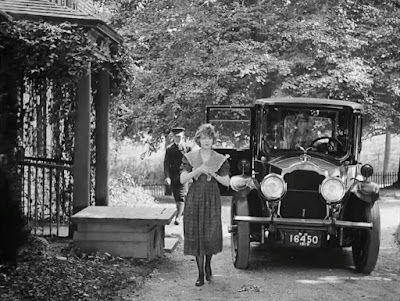 So now 'Straight is the Way' is back among us. And although the transfer was done primarily to provide DVD copies to vintage film nerds, the movie's Granite State setting (as well as its 100th birthday) seemed to call for a theatrical run—to give this picture a chance to be seen once again on the big screen, and in a theater, with an audience and live music, as its makers envisioned it.

Thus, with Ed's blessing and the enthusiastic participation of Red River Theatres in Concord, N.H., we're giving the film its first known theatrical screenings in 100 years.

The return of 'Straight is the Way' to the big screen has captured some attention. Already we've received a big write-up in the Concord Monitor, the region's daily paper. Check it out here.

To me, the most interesting aspect of  'Straight is the Way' was its setting. When I learned the story took place in my home state of New Hampshire, I simply had to back the Kickstarter campaign, and couldn't wait to see the movie.

Very few movies, and almost NO silent films, are set specifically in New Hampshire. In terms of movie locales, the Granite State is pretty much off the map.

Maybe it's because we're so far away from Hollywood. And of the few movies that are set in New Hampshire, most get made somewhere else.

One big exception is 'On Golden Pond' (1981), starring Katherine Hepburn and Henry Fonda, which was filmed in the Squam Lake area. Also, scenes for the 1995 movie 'Jumanji' were shot in Keene, N.H. 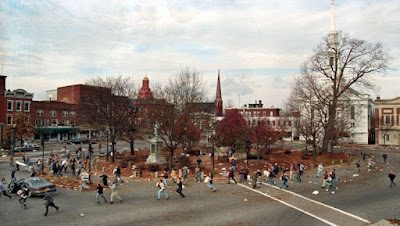 From 'Jumanji': "looters" race through "Brantford, N.H.," a.k.a. Central Square in Keene, in a photo taken by my former colleague Michael Moore at the Keene Sentinel.

But more commonly, Granite State settings are subbed out to more other "stand-in" locations.

Take the 1991 comedy 'What About Bob?' with Bill Murray and Richard Dreyfuss. Set on New Hampshire's Lake Winnipesaukee, it was actually filmed at Smith Mountain Lake in Virginia.

How about 'To Die For' (1995), an adaptation of the Pam Smart murder-for-hire scandal? It was also set in New Hampshire, but filmed in Toronto, Canada.

It's not like we're without celebrity connections. (Name dropping alert!) Comedian Sarah Silverman grew up in Bedford, N.H. in a house on the same road as mine. Talk show host Seth Myers grew up in Bedford, too—for decades, his mother taught French in a middle school two houses from mine.

And from an earlier era...legendary actor Claude Rains is buried in Moultonborough, N.H. And back in Bedford, my own community was once home to a spa called "Belle Reve," a 1940s getaway that attracted the likes of Peter Lorre.

In the case of 'Straight is the Way,' the New York City scenes are clearly filmed on location in the Big Apple, where the studio was based.

For the "Hampton Center" scenes, Lorusso can find no evidence that any shooting took place in New Hampshire. It's most likely the scenes were shot outside New York, in either rural Long Island or New Jersey, a common practice at the time.

The one clue about the location is that the mansion in the film appears to be the Long Island summer home of Ethel Watts Mumford, who wrote 'The Manifestations of Henry Ort,' a story on which "Straight is the Way" is based.

But as they might say in Hampton Center, N.H., that don't make no never mind. It's a fun film that I think audiences will find enjoyable, especially if seen on the big screen with live music and an audience, as intended.

So thanks to Ed Lorusso for resurrecting this film, and for Red River Theatres for giving it a chance once again on the big screen a full century after its original release.

See you there! More information in the press release below. 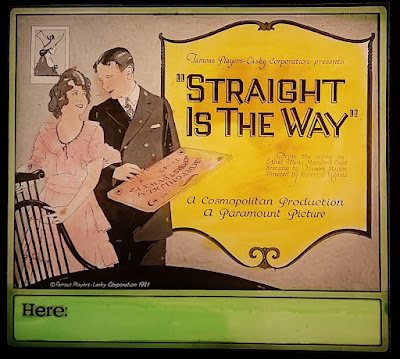 A vintage 'Coming Attractions' slide promoting 'Straight is the Way' (1921).

Vintage feature film with story set in N.H. to get first screening in 100 years

CONCORD, N.H. — It's a film that hasn't played in theaters since its original release exactly one century ago. And it's set in fictional 'Hampton Center, N.H.,' a small town where a pair of big-city crooks hide out from the law.

It's 'Straight is the Way,' a Paramount release that proved a modest box office success in the spring of 1921.

The film then completely disappeared—until now.

Next month, Red River Theaters of Concord will host the world re-premiere of 'Straight is the Way,' which boasts a screenplay by two-time Academy Award-winning writer Frances Marion.

Both screenings will feature live music by Jeff Rapsis, a New Hampshire-based silent film accompanist who arranged for permission to screen the movie, which was transferred to digital media earlier this year.

The story follows two burglars who flee to rural "Hampton Center, N.H." to hide out in the unused wing of a mansion, where an impoverished family faces eviction.

Exposed to small town values, the pair resolve to change their ways. 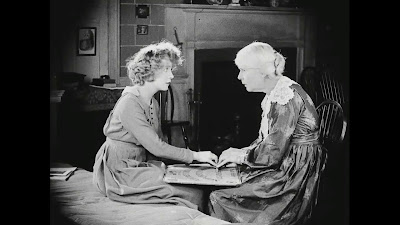 'Straight is the Way' was promoted with the tagline: "They came to lift the silver, but they stayed to lift the mortgage."

The film, a comedy/drama, features scenes in which a Ouija board is used to contact the spirits of long-dead relatives.

Ouija boards had become popular in the years following World War I, when 'Straight is the Way' was released.

How does a film disappear for 100 years, and then resurface?

Produced by Cosmopolitan Pictures, 'Straight is the Way' was one of dozens of titles on Paramount's 1921 release schedule. After its initial run, the film was never reissued.

This was the fate of nearly all motion pictures of the era, most of which were lost to neglect, decay, or accident. Today, about 75 percent of all silent films no longer exist in any form.

But 'Straight is the Way' is among the survivors. A single 35mm print of the film is in the collection of the U.S. Library of Congress. The print was part of a hoard of film material donated long ago by 1920s star Marion Davies, whose pictures were produced by Cosmopolitan.

However, the print is on fragile and flammable nitrate cellulose film stock, meaning it can't be safely projected or loaned out. To keep the film from deteriorating, the print is kept in long-term storage at the Library of Congress media center in Culpeper, Va.

In 2021, Maine-based film archivist Ed Lorusso organized an online Kickstarter program to raise funds to transfer the surviving print of 'Straight is the Way' to digital media. The fundraiser was successful, and the transfer was completed earlier this year.

Lorusso made the film available on DVD to fellow vintage film enthusiasts, including accompanist Rapsis, who felt the film's Granite State setting merited a theatrical revival, complete with live music.

"Very few films are set in New Hampshire, then or now," Rapsis said. "What's interesting about 'Straight is the Way' is that it shows how the state was viewed at the time—a place of small towns and old-fashioned ways, including a constable patrolling the town in a horse and buggy."

Although 'Straight is the Way' contains authentic details such as New Hampshire license plates on the few autos that appear, Lorusso has found no evidence that any part of the film was shot in the state.

Instead, 'Straight is the Way' was produced in New York City, where Cosmopolitan Pictures was based, and which continued to host film production even after most movie-making moved to California in the 1910s.

'Straight is the Way' features several location shots of Manhattan scenes such as Washington Square in Greenwich Village as it appeared in 1921.

Lorusso believes the New Hampshire scenes were most likely filmed in the rural countryside of Long Island or New Jersey, just outside the city, as was common practice at the time.

Lorusso has identified one location: the mansion shown in the film is the summer home of author Ethel Watts Mumford in Sands Point, Long Island. Mumford wrote 'The Manifestations of Henry Ort,' on which 'Straight is the Way' was based.

The screenplay was by Frances Marion, the one recognizable name associated with the production.

Marion, a prolific writer, authored more than 300 screenplays in a career that spanned three decades. Her credits include silent classics such as 'The Wind' (1928); she would later win Academy Awards for writing the prison drama 'The Big House' (1930) and the iconic boxing story 'The Champ' (1931). 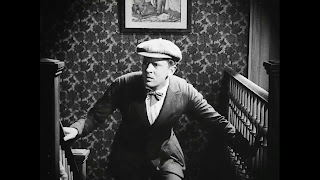 The film was directed by Robert Vignola; the following year, he would direct Marion Davies in 'When Knighthood Was in Flower' (1922) a big budget costume drama.

Rapsis said the Red River screening of 'Straight is the Way' is a rare chance to see the film as it was meant to be experienced—on the big screen, with live music, and with an audience.

"On the 100th anniversary of the film's release, I'm delighted Red River will give New Hampshire audiences a chance to see the film as it was intended to be shown, and also see how our state was depicted in the early years of cinema." Rapsis said.

'Straight is the Way' (1921), a silent comedy/drama set in New Hampshire, will be screened with live music on Thursday, Dec. 9 at 5:30 p.m. and again at 7:30 p.m. at Red River Theatres, 11 South Main St. in Concord.
A live score will be created by accompanist Jeff Rapsis, a New Hampshire-based performer who specializes in music for silent film presentations.
Tickets are general admission $12; Red River Theatres members $10. For more info and to purchase advance tickets, visit www.redrivertheatres.org or call (603) 224-4600.
Posted by Jeff Rapsis at 6:53 AM