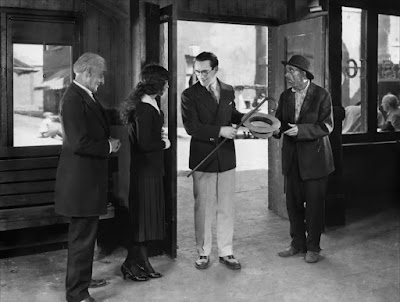 Complete info on that in the press release below. But first, an update from the front lines.

We enjoyed great turnout and good reaction yesterday afternoon at a screening of 'Nanook of the North' (1922) at the Town Hall Theatre in Wilton, N.H.

The show was part of an ongoing series celebrating the 100th anniversary of significant films, including the year's top five box office hits, all of which survive.

Nanook was not among them, but was popular and influential to be included. Plus, what better film to show in the dead of a New England winter? 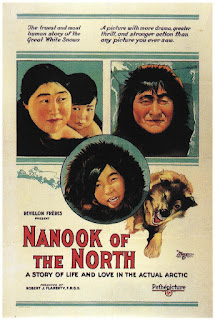 A century after its release, people are still drawn to director Robert Flaherty's images of Inuit people living among the Arctic ice floes and snow drifts.

For the music, I used piano with sustained strings to create a soundtrack that seemed to mirror the landscapes and environments seen in 'Nanook.'

It was the same thinking used by legendary composer Bernard Herrmann when he used strings only for Hitchcock's 'Pyscho' because he wanted a "black and white score for a black and white movie."

Just about everyone stayed after for what turned out to be an extended Q & A session, with people using their phones to look up information on topics about which I proved clueless.

The film was preceded by the Chaplin two-reeler 'Pay Day' (1922), which we ran in contrast to 'Nanook.'

Where Flaherty's 'Nanook' marked the beginning of documentary films, 'Pay Day' was the last of Chaplin's short comedies.

Speaking of beginnings: this Wednesday's screening of Harold Lloyd's comedy 'For Heaven's Sake' marks the start of another series—this one celebrating titles from 1926 that as of this month (January 2022) are now in the public domain.

Hope you'll join us for this uproarious comedy, which was actually Lloyd's top-grossing film of the silent era, although it doesn't get shown nearly as often as 'Safety Last' (1923) or 'The Freshman' (1925).

One other thing: 'For Heaven's Sake' is one of the films in which Lloyd starts at the top, rather than having to climb his way up. (Another one is 1923's 'Why Worry?')

So if you think Lloyd always followed the same "young man has to prove himself to win the girl" formula, then 'For Heaven's Sake' might surprise you.

Press release is below. Showtime is 6:30 p.m. See you there! 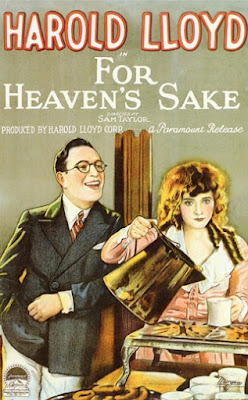 PLYMOUTH, N.H. — On New Year's Day, hundreds of movies became a lot easier to show and to watch.

That's because copyright protection for all films released in 1926 expired on Jan. 1, 2022, putting them in the public domain.

To mark the occasion, starting this month the Flying Monkey Moviehouse and Performance Center will revive the top motion pictures of 1926.

In 'For Heaven's Sake,' Lloyd plays a wealthy young man smitten with the daughter of an impoverished clergyman who ministers to the urban poor.

On the day Lloyd and the girl plan to marry, Lloyd's wealthy country club friends kidnap him to prevent what they see as an embarrassing mistake.

Can the urban mission's petty criminals and chronic alcoholics rescue Harold and get him to the church on time? 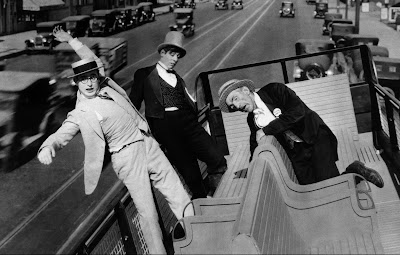 Lloyd and friends atop an open-air double-decker bus in 'For Heaven's Sake.'
'For Heaven's Sake,' promoted with the tagline 'A Man With A Mansion, A Miss with a Mission,' became the year's 4th-highest grossing film, earning $2.6 million.

Silent film accompanist Jeff Rapsis will improvise a musical score to the film in real time as the movie is screened.

In creating music for 'For Heaven's Sake' and other vintage classics, Rapsis tries to bridge the gap between silent film and modern audiences.

Upcoming screenings in the Flying Monkey's "Public Domain Extravaganza" include:

• Wednesday, March 9, 2022, 6:30 p.m.: "The Winning of Barbara Worth" (1926) starring Ronald Colman, Vilma Banky, and Gary Cooper. Epic Western drama about the settling and irrigation of California's Imperial Valley, once a wasteland but now an agricultural paradise. Shot on location by director Henry King in Nevada's Black Rock desert, one of the first films to take audiences to the wide open spaces of the great American West. With a young Gary Cooper playing a key role.

• Wednesday, May 11, 2022, 6:30 p.m.: "Bardelys the Magnificent" (1926) starring John Gilbert. Gilbert tries his hand at swashbuckling in this big-budget MGM historical extravaganza about exploits of an unjustly disgraced French nobleman. A major film long thought lost until a single print was recently discovered in France.

Harold Lloyd's romantic comedy ‘For Heaven's Sake’ will be shown with live music on Wednesday, Jan. 26 at 6:30 p.m. at the Flying Monkey Moviehouse and Performance Center, 39 Main St., Plymouth, N.H.