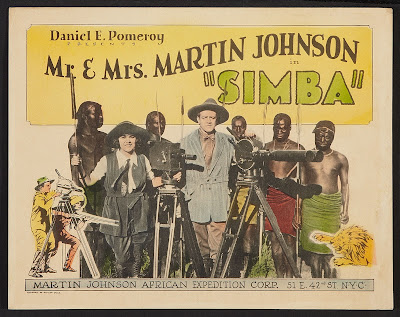 A lobby card for 'Simba' (1928), a wildlife documentary produced by Martin and Osa Johnson, who pioneered airborne wildlife photography.

Sometimes two of my many separate lives crash into each other—like tonight!

This evening, as executive director of the Aviation Museum of N.H., I'll present a lecture on the lives of Martin and Osa Johnson, pioneer wildlife photographers and aviators.

And then, as silent film accompanist, I'll create music for 'Simba: King of the Beasts' (1928) a documentary made by the Johnsons that mesmerized audiences around the world.

However, I understand that tomorrow's edition of our statewide daily newspaper, The Union Leader, will carry a big feature on our program.

That's great, but the Town Hall Theatre is not exactly Radio City Music Hall in terms of capacity.

So if you plan to attend, come early!

And if you're not aware of the Johnsons, it's not surprising. Although they enjoyed worldwide fame a hundred years ago, their name has faded from public awareness.

I wasn't aware of them at all until just a few years ago, when the Kansas Silent Film Festival programmed 'Simba.' (The Johnsons hailed from the Sunflower state.)

Wow! I was impressed and intrigued at the time. It's no wonder the Johnsons were celebrities—their life of adventure maintains a strong pull even in our "we've seen it all" age.

Heck, maybe the appeal is even stronger today!

Well, find out for yourself by attending tonight's program. Admission $10 per person, with all proceeds to benefit the Aviation Museum's youth aviation education programs.

Press release is below. See you tonight in Wilton! 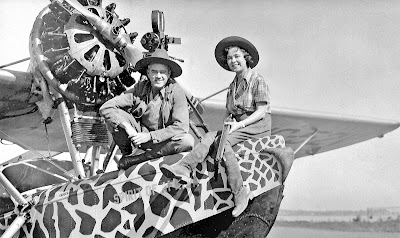 Martin and Osa Johnson with the Sikorsky S-39 float plane they flew around Africa in the 1930s to film exotic animals in their natural habitat.

Take off to adventure! Celebrating the Johnsons, pioneering aviators who captured first movies of African wildlife

WILTON, N.H. — Want to see a century-old safari movie made in Africa by pioneering aviators whose special plane would later boast a Granite State connection?

Then take off to Wilton's Town Hall Theatre on Thursday, Jan. 27, when the Aviation Museum of N.H. presents 'Martin and Osa Johnson: Adventure's First Couple,' a combination lecture and movie screening.

The program starts at 7:30 p.m. and is open to the public. Tickets available at the door: $10 per person, general admission. All proceeds support the non-profit Aviation Museum's education programming.

The evening opens with a review of the extraordinary career of the Johnsons, a Kansas couple who gained worldwide fame in the early 20th century for far-flung exploits that combined adventure, aviation and wildlife photography.

Often wearing classic safari outfits and topped by pith helmets, the duo journeyed deep into Africa and Asia in the 1920s and 1930s, getting the first motion pictures of exotic wildlife in its native habitat.

Back home and in Europe, they achieved great popularity on the lecture circuit by recounting their exploits in foreign lands.

After Martin Johnson learned to fly, they used Sikorsky float planes painted with zebra and giraffe markings to reach remote regions of Africa and Asia, and also photograph wildlife from the air.

As filmmakers, the couple produced several wildlife documentary films chronicling their adventures. These also proved immensely popular, laying the groundwork for all wilderness filmmaking to follow. 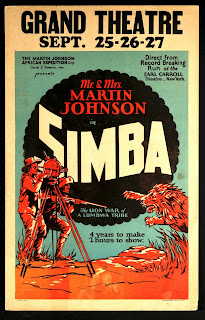 The program will include with a screening of 'Simba: King of the Beasts" (1928), a documentary the Johnsons compiled from film they shot in Africa from 1923 to 1927. The silent film will be shown with live musical accompaniment.

The program will be presented by Jeff Rapsis, executive director of the Aviation Museum of N.H. Rapsis prepared the program with assistance from the Martin and Osa Johnson Safari Museum of Chanute, Kansas—Osa Johnson's hometown.

Rapsis, who moonlights as a silent film accompanist, will also provide the live music for the screening "Simba: King of the Beasts."

The 'Simba' documentary is not recommended for children due to graphic scenes of violence that include the shooting and killing of animals.

"Martin and Osa Johnson: Adventure's First Couple" is the first in a series of humanities programs planned for 2022 by the Aviation Museum of N.H.. The series is supported in part by Grappone Auto and the Sidore Foundation.

"The story of the Johnsons is one that combines aviation with so much else that humans find fascinating," Rapsis said. "Their work is worth looking at today because it's about topics that remain compelling: animals, wildlife, adventure, and exotic places."

"But now, so many decades later, their work has an added layer because it displays attitudes that prevailed a century ago in topics such as gender roles, treatment of animals, and race," Rapsis said. "As such, it can teach us a lot." 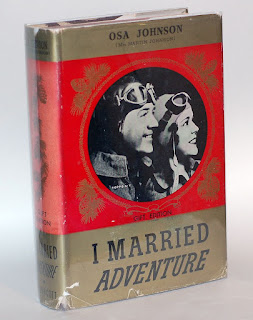 At the height of their fame, Martin Johnson was killed in 1937 in an airplane crash in California. Osa Johnson later wrote a best-selling book, "I Married Adventure," which recounted the couple's exotic and at-times dangerous expeditions.

Following her death in 1953, the couple's fame faded and their achievements were largely forgotten as new wilderness stars emerged in the television era, including Marlin Perkins (producer of 'Wild Kingdom') and undersea explorer Jacques Cousteau.

But one of the aircraft they used in their adventures—the Sikorsky S-39, a single-engine float plane—captured the imagination of Dick Jackson, a pilot and mechanic from Rochester, N.H.

Looking for a project, in 1963 Jackson chose to restore a Sikorsky S-39 to flyable condition. The painstaking effort took more than four decades, but in 2003 Jackson completed the work and the world's only remaining S-39 made its maiden flight.

In honor of the Johnsons, the plane was painted in exactly the same giraffe pattern used by the famous couple during their African adventures. Today the aircraft remains airworthy, and is part of the collection housed at the "Fantasy of Flight" museum in Polk City, Fla.

The program will include recent scenes of the restored Sikorsky in flight—and on the water—in its Florida environs.

For more information, visit www.aviationmuseumofnh.org or call (603) 669-4820. Follow the Aviation Museum on social media at www.facebook.com/nhahs.