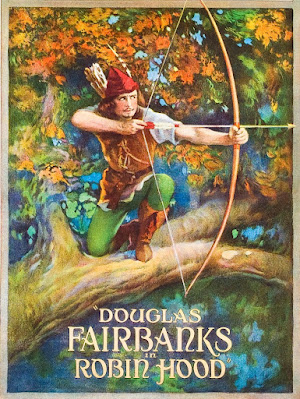 The #1 box office blockbuste of 1922: Douglas Fairbanks in 'Robin Hood.'

Get set for a four-month series exploring the top box office hits of 100 years ago!

More on that in the press release below. First, I'd like to recount my recent adventure with a pipe organ in the neighboring state of Vermont. 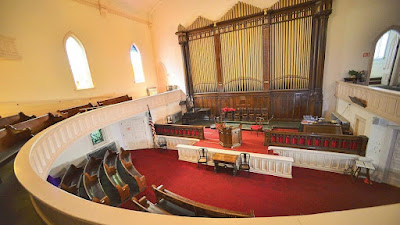 The interior of Epsilon Spires, which until recently was a Baptist Church.

Because it once was a church, it has an organ—in fact, an Estey organ built right there in Brattleboro and installed in 1906.

And that's what I used to do music for Victor Sjöström's influential drama.

I don't get many chances to do live pipe organ accompaniment. So it was a real treat to start the new year working with the "king of instruments."

The Estey, though technically a church organ rather than one built for movie accompaniment, is nevertheless up to the job of film accompaniment.

It has a nice variety of stops, making possible a range of textures. And it can really rock the house when called for.

(And I've since learned that among the church's former congregants was Jacob Estey himself, who founded the organ-building company that bore his name.)

I augmented the organ's sound by using my digital synthesizer to add in percussion at key moments: timpani, bass drum, and cymbals.

Although the organ was in tune with itself, I found it pitched about a half-tone lower than my synthesizer, which is defaulted to A = 440 Hz. So I had to pull the synth pitch down to about 415 Hz to compensate.

I've since read that this lowered pitch is standard practice for some instruments in playing music from the Baroque era. So much to learn!

One other odd thing is the Estey's pedal board—but in this case, it's me that's out of synch.

The Allen organ I have at home is equipped with what's called a "Princess" pedalboard, meaning it's smaller than a full-sized pedalboard.

Specifically, it's built to 3/4 size, I guess to make it easier to fit in a living room, which is where it would have been played back in the era of the home organ.

So my instincts regarding pedal location are off by a certain amount. It takes time to adjust to the different proportions of a full-sized pedalboard. Even so, I managed to hit most of the notes I aimed for.

Accompanying the film on an unfamiliar instrument was a workout.

But I have to say, from the standpoint of the accompanist, bringing a film to a conclusion with an organ is especially satisfying for some reason. And it's not because I ended big—with 'The Phantom Carriage' (called 'Körkarlen' in Swedish'), I actually pulled a move from the ending of the Brahms Symphony No. 3, drawing up to a quiet close.

Rather, in silent film accompaniment, there's something about the sound of an organ that helps the sum add up to more than the parts.

I want to thank Jamie Mohr and her colleagues at Epsilon Spires for the chance to work with the Estey and accompany 'The Phantom Carriage.'

There's talk of follow-up screenings. I'd welcome that because it would mean to chance to really get to know the Estey.

Again, I just don't get a lot of chances to play pipe organ, so I'm excited about a venue with a working organ that's fairly close to home base.

As was once said in a non-silent movie, "This could be the beginning of a beautiful friendship."

Okay, onto the future, which in this case means heading back into the past.

On Sunday, Jan. 9, the Town Hall Theatre will begin a series of 100th anniversary screenings of the top box office hits of 1922.

First up is Harold Lloyd's breakthrough feature comedy 'Grandma's Boy,' which clocks in at No. 5 in the box office records.

Plenty of other great pictures are lined up, too—but rather than have me prattle on about them here, check out the press release below.

Hope you'll join me in catching up on all the big hits of 1922 that for some reason you missed on their original runs! 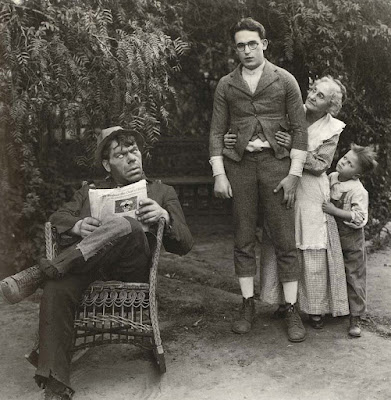 Starting in January, the Town Hall Theatre will reset the clock and celebrate the top box office hits of 1922, when the movies were just coming into their own.

The program includes now-classic blockbusters such as Rudolph Valentino's bullfighting drama 'Blood and Sand' (1922); Marion Davies in the medieval romance 'When Knighthood was in Flower' (1922); and the year's highest-grossing film, 'Robin Hood' (1922) starring Douglas Fairbanks Sr.

Live music will be provided by silent film accompanist Jeff Rapsis. Admission is free, with a suggested donation of $10 per person to help cover expenses.

Subsequent programs will include all of 1922's five highest-grossing titles, each shown on the big screen with live music, as well as century-old oddities, short films, cartoons, and more. 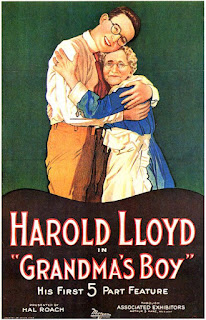 'Grandma's Boy,' the first feature in the series, tells the story a cowardly young man (Harold Lloyd) who seeks the courage to battle a menacing tramp who terrorizes his small hometown.

Audiences loved 'Grandma's Boy.' The film grossed $1.1 million, making it the year's 4th-highest grossing picture and the year's most popular comedy.
At the time, a successful feature film typically grossed $100,000. The picture helped establish Lloyd as a major star for the rest of the silent film era, and prompted rival comedians Charlie Chaplin and Buster Keaton to also make feature-length films.

In revival, 'Grandma's Boy' continues to delight movie-goers and serves as a great introduction to the magic of silent film. It also provides a window into small town American life as it was lived a century ago.

The Jan. 9 screening will include a special 100th anniversary cake to be enjoyed to movie-goers on a first-come, first-served basis.

• Sunday, Jan. 23, 2022 at 2 p.m.: 'Nanook of the North' Breakthrough 1922 documentary tells the story of Inuit hunter struggling to survive in far-north Canada.

• Sunday, Feb. 20, 2022 at 2 p.m.: 'When Knighthood was in Flower' Marion Davies goes medieval in this epic big budget costume picture from 1922 that put her on the map as a top Hollywood star.

• Sunday, April 10, 2022 at 2 p.m.: Chaney/Houdini Double Feature. In 'Flesh and Blood' (1922), escaped convict Lon Chaney hides out in Chinatown and plots revenge. In 'The Man From Beyond' (1922) illusionist Harry Houdini plays an Arctic adventurer frozen for 100 years!

• Sunday, April 24, 2022 at 2 p.m.: Emil Jannings in 'Othello' The Bard's immortal tragedy brought to the screen in this early German version. Silent Shakespeare in honor of the author's 458th birthday.

The 1922 series is made possible in part by the unlikely survival of so many of the year's top titles.

"With 80 percent of all films from the silent era lost or missing, we're fortunate to have all top five films from 1922 available to screen a full century after their release," Rapsis said.

"We invite all silent film fans, and also those who haven't experienced this type of cinema in a theater with an audience and live music, to come see the motion pictures that caused people to first fall in love with the movies," Rapsis said.

'Grandma's Boy' will be screened with live music on Sunday, Jan. 9 at 2 p.m. at the Wilton Town Hall Theatre, 40 Main St., Wilton, N.H.
Admission is free, with a suggested donation of $10 per person to help defray expenses. For more info, call (603) 654-3456 or visit www.wiltontownhalltheatre.com.
P.S.: Check out this flyer promoting the series!