Coming up: Keaton double feature in Vermont; first, thoughts from a screening of 'The General'

Update on Saturday, July 23: Due to extreme heat, the Buster Keaton double feature scheduled for this evening in Brandon, Vt. has been postponed to Saturday, Aug. 6 at 7 p.m. Sorry for any inconvenience. We hope to see you in two weeks for an excellent program in a much more comfortable auditorium. 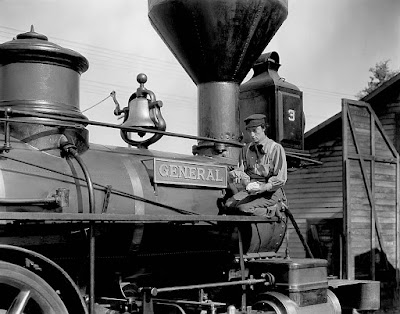 Buster and co-star 'The General': two-thirds of a ménage à trois?

First, I introduced the film by posing a question that I'd just then thought of.

"Right at the beginning," I said to the Rex Theatre audience in Manchester, N.H., "you'll be told that Buster has two loves.

I paused, as the film doesn't use words, but then cuts to Marion Mack as "the girl."

"So as you watch the film, you'll see plenty of both. And my question to you is, which do you think he loves more?"

That got a laugh, as did my follow-up observation that 'The General' may seem to be a story about the Civil War. But on an emotional level, it's about a love triangle between a man, a woman, and inanimate object with a name.

"It's like a ménage à trois," I said, to more laughter.

But it really is, when you think about it. Buster, his girl, and 'The General.' At the beginning of the film, Buster presents the girl with a photo of himself and 'The General,' just so the relationship is clear.

I also asked people why they thought Buster changed the original story to make the Confederates the heroes and the Union soldiers the villains.

I feel the real reason is that for the film to do any box office at that time in the Old South, with the Civil War within living memory, the Confederacy could not be portrayed as bad guys.

Buster raises the "Stars and Bars" of the Confederacy in 'The General.'

But last night's screening brought forth a new suggestion: that Buster cast himself as a would-be Confederate soldier as a way to add to the laugh quotient.

Not sure I buy that, as it doesn't quite mesh with Buster's original sentiment, which pointed to the need of respecting the Confederacy.

Well, the debate continues. But there's no debating what I'll be up to on Saturday night in Brandon, Vt.: more Keaton!

I accompanied 'Butler' the other week at the Leavitt Theatre in Ogunquit, Maine, and found the audience reaction to be livelier than usual.

A contributing factor may have been my decision to deliberately underplay the accompaniment, which seems to be a key in supporting Keaton's brand of comedy.

See for yourself by making the trek up to Brandon, Vt., where the bell rings for the main event on Saturday, July 23 at 7 p.m. 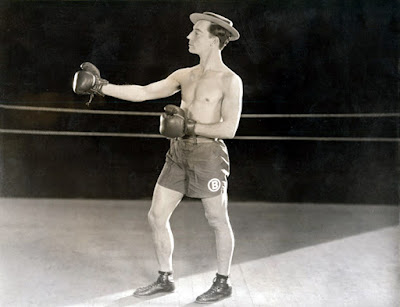 See for yourself with a screening of 'Battling Butler' (1926), one of Keaton's landmark feature films, on Saturday, July 23 at 7 p.m. at the Brandon Town Hall and Community Center, 1 Conant Square, Route 7 in Brandon, Vt.

Live music for the 'Battling Butler' and a companion Keaton feature, 'Sherlock Jr.' (1924) will be provided by Jeff Rapsis, a New Hampshire-based performer and composer who specializes in scoring and presenting silent films. Keaton, along with Charlie Chaplin and Harold Lloyd, stands as one of the silent screen's three great clowns.

Many critics regard Keaton as the best of all; Roger Ebert wrote in 2002 that "in an extraordinary period from 1920 to 1929, (Keaton) worked without interruption on a series of films that make him, arguably, the greatest actor-director in the history of the movies." But while making films, Keaton never thought he was an artist, but an entertainer trying to use the then-new art of motion pictures to tell stories and create laughter.

The program will open with another Keaton comedy, 'Sherlock Jr.' (1924), in which Keaton plays a movie projectionist who dreams of being a detective.

The screening of 'Battling Butler' and 'Sherlock Jr.' is sponsored by Kathy and Bill Mathis in memory of Maxine Thurston.

'Battling Butler' (1926) and 'Sherlock Jr.' starring Buster Keaton will be screened with live music on Saturday, July 23 at 7 p.m. at the Brandon Town Hall and Community Center, Route 7, in Brandon, Vt.

All are welcome to this family-friendly event. Admission is free, with free will donations accepted in support of ongoing Town Hall renovations.