Norma Talmadge in 'Within the Law' on Sunday, July 24 at Town Hall Theatre, Wilton, N.H. 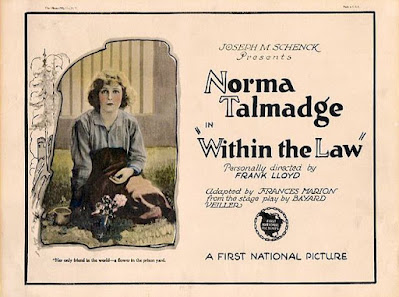 I'm not sure what kind of attendance we'll get due to today's excessive heat, but I have high hopes for 'Within the Law' (1923), a Norma Talmadge drama that I'm accompanying this afternoon.

Showtime is 2 p.m. at the Town Hall Theatre in Wilton, N.H. Lots more details in the press release below.

Like all titles in this summer's "Women of the Silent Screen" series, it's a film I've never accompanied before.

But 'Within the Law' turns out to be what I would describe as a pre-feminist "revenge-against-the-paternity" drama, and darned interesting because of that.

I also read in the new Curtis biography of Buster Keaton that originally producer Joe Schenck (Norma's then-husband) planned to use English actress Margaret Leahy in 'Within the Law' after she won a publicity contest in Great Britain.

But then director Frank Lloyd (who would go on to direct Charles Laughton in 1935's 'Mutiny on the Bounty') discovered the unfortunate fact that Leahy simply could not act.

Schenck took Leahy off the picture and instead gave him to his brother-in-law, comedian Buster Keaton, then planning 'Three Ages' (1923), his first foray into features.

Buster, who was married to Norma's sister Natalie, was told to use Leahy, and he did.

Although 'Three Ages' wasn't nearly as demanding as the Talmadge drama, Keaton found it nearly impossible to get a usable performance out of her.

In addition, 'Within the Law' contains a juicy part for Ward Crane (who plays 'English Eddie,' a police stool pigeon), familiar to Keaton fans as the villain in 'Sherlock Jr.,' made the next year.

It's remarkable the discover the close links between such different films and filmmakers. The big factor, of course, is Joe Schenck, who seems to have moved performers and technicians around his various productions like pieces on a chess board.

Hope to see you in Wilton this afternoon. I'm sure the big old window-unit air conditioners are already running... 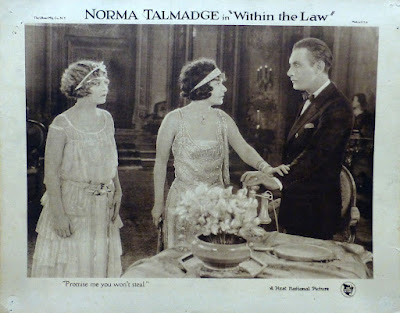 Norma Talmage (center) is 'Within the Law'...for now.

WILTON, N.H.—An intense drama starring one of the most popular actresses of the era is next up the Town Hall Theatre's summer-long salute to female stars of the silent screen.

In 'Within the Law,' Talmadge plays Mary Turner, a shopgirl working for slave wages who winds up in prison for a theft she did not commit.

Mary is bitter over her ruined life and swears vengeance on her former employer, Edward Gilder (Joseph Kilgour).

When Mary is released from prison and cannot find work, she teams up with Aggie Lynch (Eileen Percy) to extort money out of elderly men.

'Within the Law' was partially filmed on location in New York City, providing glimpses of the Big Apple during the Roaring '20s.
Throughout the 1920s, the most famous sisters in the entertainment world were the Brooklyn-raised Talmadges: Norma, Natalie and Constance. 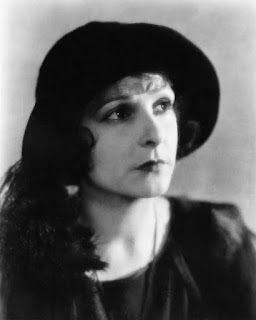 Norma (at left), the eldest, was a dramatic actress of great talent and restraint. She was loved by a public that identified with the brave, tragic heroine she often played of melodramas and tragedies.
Appearing in movies with high production values and helmed by some of Hollywood's finest directors, Norma developed into one of the great screen actresses of the period.
By 1920, she had eclipsed Mary Pickford as the top worldwide female box-office attraction.
The screening of 'Within the Law' is the latest in a Town Hall Theatre summer series featuring female stars of the silent screen, all with live music by accompanist Jeff Rapsis.

Here's the line-up of upcoming screenings: